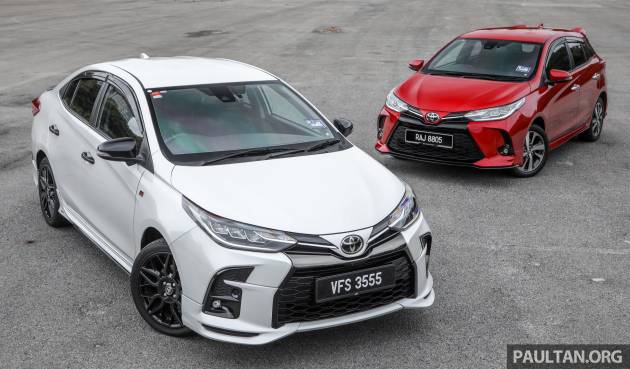 The Toyota Vios GR Sport (GR-S) and Yaris 1.5G are the top-of-the-range variants of their respective models, with both being introduced last December. We’ve already featured the former in a side-by-side gallery post with the Honda City previously, and we’re now doing another with its hatchback sibling that sadly doesn’t get the Gazoo Racing treatment.

Pricing-wise, the Yaris 1.5G is the more affordable option of the two, retailing at RM84,808 on-the-road without insurance. Meanwhile, the Vios GR-S goes for substantially more at RM95,284, which is also RM7,700 more than the second-tier Vios 1.5G at RM87,584. These figures factor in the ongoing sales tax exemption, which is 100%, as the Vios and Yaris are locally assembled (CKD) here in Malaysia.

Under the bonnet, both cars are powered by the same 2NR-FE 1.5 litre Dual VVT-i four-cylinder petrol engine that delivers 107 PS at 6,000 rpm and 140 Nm of torque at 4,200 rpm. The mill sends drive to the front wheels via a CVT, which has seven virtual speeds in the Yaris, but the Vios GR-S gets ten. That’s three more than the regular Yaris and Vios variants, with Toyota claiming improved engine response as a result by keeping it in a higher RPM range.

This is just one of several enhancements developed locally to make the Vios GR-S sportier, hence the asking premium. Besides the “10-speed CVT,” the Vios GR-S also comes with sports-tuned suspension, larger 17-inch multi-spoke wheels in black and 205/45 profile Toyo Proxes TR1 tyres – the last two items being the largest ever fitted to a Vios from the factory.

On the exterior, there’s a full body kit that is inspired by the GR Yaris. The package includes an aggressive front bumper that has prominent faux intakes, a honeycomb mesh instead of horizontal slats for the lower intake, a new rear bumper with an integrated diffuser, side skirts as well as black side mirrors, door handles and a boot lid spoiler.

Inside, there are sports seats trimmed in a combination of leather and suede, with red stitching, along with a red Optitron meter panel featuring red needles instead of the blue-white theme in lesser variants. The 4.2-inch multi-info display (MID) also gets a model-specific startup screen and you’ll find plenty of GR badging on the exterior and interior (including the floor mats).

As for the Yaris, it is largely identical to the regular Vios at the front, although it too sports a honeycomb mesh instead of horizontal slats. The obvious hatchback body also results in 286 litres of boot space being made available compared to 506 litre you get with the B-segment sedan, regardless of variant. The interior layout is the same for both the Vios and Yaris, with the differences being the kit you get.

In terms of equipment, the Vios GR-S shares many items with the Vios 1.5G (save for the sporty additions), which itself is quite similar to the Yaris 1.5G. Standard items for the two compared models here include LED headlamps, LED taillights, LED fog lamps, keyless entry and engine start, the aforementioned Optitron panel and 4.2-inch MID, single-zone automatic air-conditioning and UMWT’s Vehicle Telematics System (VTS).

Similarly, the infotainment is a seven-inch Display Audio system with wired Android Auto and Apple CarPlay support, linked to a six-speaker sound system. Unlike the Vios 1.5G that gets black leather seats and the Vios GR-S that comes with leather/suede upholstery, it’s just fabric for the whole Yaris range. The Yaris 1.5G gets smaller 16-inch alloys with 195/50R profile Proxes R50 tyres as well.

So, between the two top-spec Vios and Yaris variants, which one do you find more appealing? Let us know what you think in the comments below.

Girl, 13, overdoses after partying lifestyle got her hooked on LSD and ecstasy

Mitsubishi back in Europe with new Renault deal