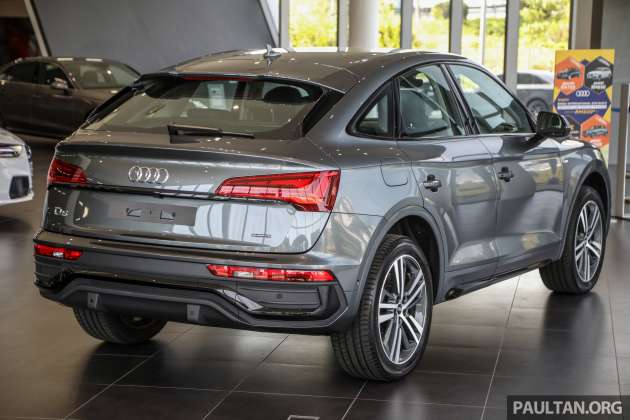 Aside from the facelifted Audi A4, we also managed to snag photos of the Q5 Sportback at Audi Setia Alam by Rimbau International. The coupé-style SUV was launched back in August, but this is the first time we’re seeing it in the metal.

Just one variant is being offered, the S line 2.0 TFSI quattro priced at RM404,879 on-the-road without insurance. This figure includes a 50% sales and service tax (SST) rebate valid until June 30, plus a five-year, unlimited-mileage warranty. 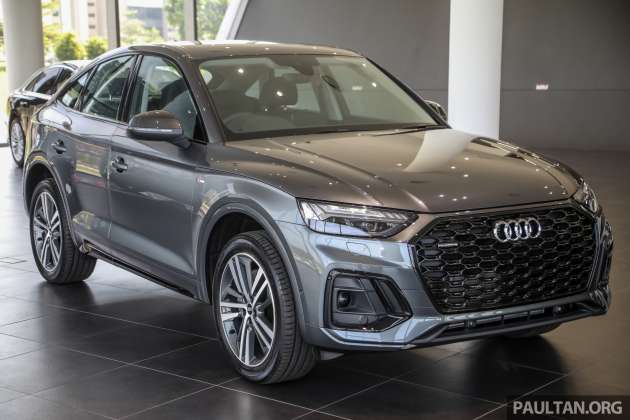 The Sportback was introduced as part of the facelift of the wider Q5 range, adding a roofline that slopes gently towards the rear of the car. The car’s 1,660 mm height actually remains the same (as is its 1,893 mm width), but its 4,689 mm length is seven millimetres longer, while the drag coefficient has dropped to 0.30. Compared to the standard Q5, the boot is slightly smaller at 510 litres; cargo capacity is increased to 1,480 litres with the rear pews folded.

Aesthetically, the Sportback borrows plenty from the facelifted Q5, including a wider and flatter “singleframe” grille, trapezoidal LED headlights and redesigned LED tail lights. The S line model gets a unique grille mesh and chrome-trimmed front air intakes, as well as an entirely new rear bumper design that ditches the quad tailpipes in favour of a large black diffuser.

The Malaysian-market model also receives 20-inch five-split-spoke two-tone alloy wheels, along with the Black Appearance package as part of the Premium Package. This includes gloss black highlights on the grille, front bumper corners, window trim and the side and rear strips, replacing the usual chrome items. 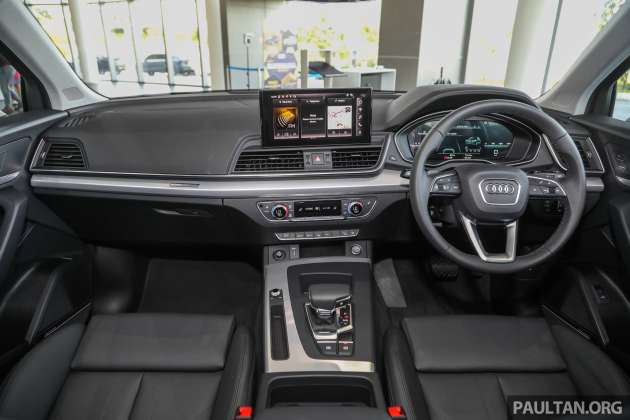 Inside, the Sportback joins the facelifted Q5 in adopting the latest touch-based Multi Media Interface (MMI), jettisoning the rotary controller on the centre console. The MMI Navigation plus system utilises a larger 10.1-inch freestanding touchscreen, while a 12.3-inch Audi virtual cockpit plus display is also fitted.

The Sportback also comes with the Audi smartphone interface with Apple CarPlay and Android Auto connectivity, as well as Audi connect functionality that includes emergency services, points of interest search and a WiFi hotspot. Here, the Premium Package throws in a 19-speaker Bang & Olufsen 3D sound system and a Park Assist package with a 360-degree camera system.

Safety-wise, the Q5 Sportback comes with six airbags, stability control and ISOFIX child seat anchors both on the rear seats and the front passenger pew. However, the car does not come with driver assistance features like autonomous emergency braking, not even as an option – although you do get blind spot monitoring, pre safe rear, rear cross traffic alert and a door opening warning as part of the Premium Package.

The car you see here is also fitted with the optional matrix LED headlights (hence the camera at the top of the windscreen) with segmented LED daytime running lights, which is priced at RM10,478. Other items on the options list include OLED taillights (RM12,595, or a whopping RM20,956 in conjunction with the matrix headlights), a panoramic sunroof (RM16,082), a head-up display (RM10,374), black door mirrors (RM1,118), red brake callipers (RM3,488) and a flat-bottomed steering wheel inclusive of dynamic steering (RM11,805).

Audi is also offering two Audi Sport wheel options, both with a two-tone finish. The complex 20-inch machined-finished alloys are priced at RM5,709, while the larger 21-inch rollers with matte grey inserts retail at an eye-watering RM11,641.

Lucchese Bootmaker stepping into storefront near Union Station in Denver

Jerome Powell’s future as chair of the Fed could be affected by its pandemic response.