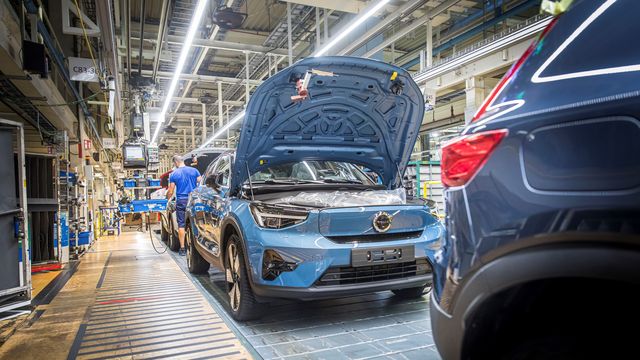 This week Volvo began production of the C40 Recharge—its first electric car that doesn’t have a gas-engined twin in the lineup, and its second battery-electric model overall. The first examples rolled off the assembly line in Ghent, Belgium, which also produces the XC40 Recharge, where EV production will account for more than half of the plant’s volume starting next year.

“The C40 Recharge is a car that represents our future,” said Javier Varela, senior vice president for industrial operations and quality at Volvo Cars. “Our manufacturing operations and a close collaboration with our suppliers are key in achieving our future ambitions in terms of electrification and climate neutrality. Our Ghent plant is ready for an all-electric future and will be an important part of our global industrial network for the years to come.”

In all, Volvo plans for EVs to make up half of its sales by 2025, and 100% by the year 2030, which has motivated recent plans to raise over $2 billion via a listing on Stockholm’s Nasdaq. Volvo’s Polestar sibling brand, on the other hand, has been focused entirely on EVs, and has recently announced plans to go public via a SPAC with sponsor Gores Guggenheim, with an expected valuation of $20 billion. Both cash-raising efforts are aimed at funding the transition to all-EV lineups for both brands,

The C40 Recharge borrows the powertrain from its XC40 Recharge sibling, featuring a 78-kWh battery sending power to two electric motors that produce a combined 402 hp and 486 lb-ft of torque. Among other things, this allows the AWD model to sprint from 0 to 60 mph in just 4.7 seconds.

“The C40 Recharge offers the benefits of an SUV but with a lower and sleeker design,” the automaker added. “The rear of the C40 Recharge features a striking rear-end design to go with the lower roof line, while the new front design introduces a new face for electric Volvos and includes headlights with state-of-the-art pixel technology.”

Just what the EPA range figures will end up being is still up in the air, but they should land just north of the 220-mile mark, based on the 223-mile range of its wagon-shaped sibling. This will land it a bit south of the ranges offered by the likes of the AWD Volkswagen ID.4, Audi Q4 e-tron, and the Tesla Model Y, but still within the 220-280 mile range that’s emerged as a sweet spot for vehicles of its type.

Its starting price of $58,750, prior to the application of any federal or local incentives, will make it one of the pricier choices in this segment, especially given the fact that a bit more range will be offered by some of the competitors. The C40 Recharge is also expected to feel some heat from much less expensive models like the VW ID.4 and the Nissan Ariya, the latter of which will arrive on sale shortly. So it remains to be seen whether it will be able to make up for some small disadvantages with other qualities, like tech and luxury features inside.