The standard answer from Chevrolet, when asked about what the plans are for 2022 now that the GT Le Mans class is going away, is that “We’ll be racing somewhere in 2022,” sort of giving the impression that it may be in the Europe-based World Endurance Championship instead of IMSA, since the current car isn’t legal for 2022, when IMSA will split the current GT3-based GT Daytona class into a Pro-Am format, with the “Pro” allowing for factory backing and professional drivers, while “Am” will be an amateur-heavy drivers lineup and privateer ownership.

This weekend, several sources confirmed that the current GTLM C8.Rs will be modified—slowed down, in other words—to match the rules for Pro next year. So the Corvette, a uniquely American sports car, will be racing in America, where it belongs.

Why the change? We saw it this weekend—after Porsche and BMW pulled their factory support for GTLM, it left only three cars—the two baby-seal-clubbing Corvettes, and one privateer Porsche led by amateur racer Cooper MacNeil, with family support from WeatherTech, which moved up from GTLM. The Porsche has done better than you’d expect, but to be anywhere but the bottom step on the podium, it requires a Corvette to either break or crash. And that didn’t happen Saturday, when the Corvette of Tommy Milner and Nick Tandy edged out the Corvette of Jordan Taylor and Antonio Garcia, which is still leading the points with two races to go.

So rejoice, Corvette fans: You’ll have cars in IMSA to cheer on next year.

Points were close in the Daytona Prototype class before the Long Beach race, and they are closer now with the dominant win of the No. 31 Whelen/Action Express Cadillac of Felipe Nasr and Pipo Derani.

The team was less than 100 points behind the leading No. 10 Wayne Taylor Racing/Konica Minolta Acura, which finished a disappointing fourth, meaning the No. 10 takes a razor-thin 19-point advantage to the final Prototype race, the season finale at Road Atlanta, Petit Le Mans. (The next race, at Virginia International Raceway, is GT-only.) “It’s going to go down to the wire,” Nasr said. “Now we are in the fight.”

(No) Caution to the Wind 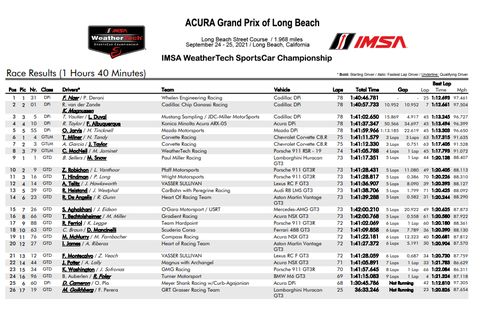 The race was slowed by a single caution for debris, far below the average number of cautions for a street race on a concrete-lined track. IMSA officials had at least three chances to throw the yellow, twice for relatively minor crashes and another when a banner was scraped off the wall and inserted itself into traffic, but they were commendably slow on the trigger. NASCAR could learn something here.

Unfortunately though, since the single caution occurred 12 minutes into the 100-minute race, the race leaders had a chance to build up a decent margin, and there were no genuinely close finishes at the checkered flag. 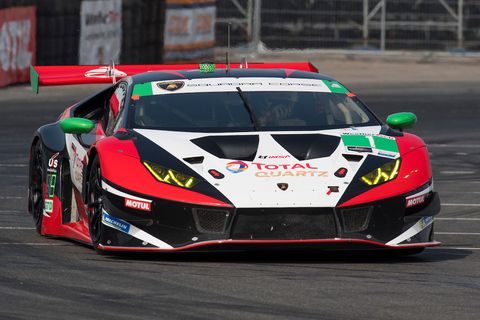 A tip of the hat to the GTD class, which hasn’t been to Long Beach for three years (including the COVID-cancelled 2020-race) and consequently had quite a few drivers who had never raced on the track before. With a few notable exceptions, they behaved themselves. Winning the class, for the first victory since 2020’s Rolex 24 at Daytona, was the Paul Miller Racing Lamborghini of Madison Snow and Bryan Sellers. 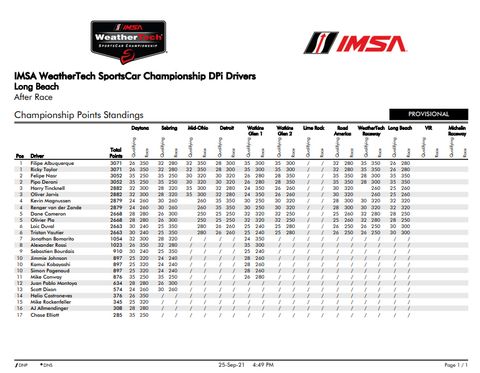 Points in all three classes (the LMP2 and LMP3 cars weren’t invited to Long Beach) are tight, including in GT Daytona, where the surprising leader is the plaid-painted No. 9 Porsche of Pfaff Motorsports and drivers Zach Robichon and Laurens Vanthoor, with the Miller Lamborghini now just 32 points back after their long-awaited win. GT Daytona has two races to go compared to the Daytona Prototype’s one, since they will be racing at both VIR and Petit. The plaid Porsche finished a distant second, but it was enough to vault them into the points lead.

“A good weekend,” Vanthoor said. “Maximum points in qualifying and second in the race. So, can’t complain. At one point we were not in a great position in the race, but we managed our car back up to second place. That gave us the championship lead which I think is important with two races to go.”

No private chats with EU! Lord Frost puts foot down in fuming letter to devolved nations