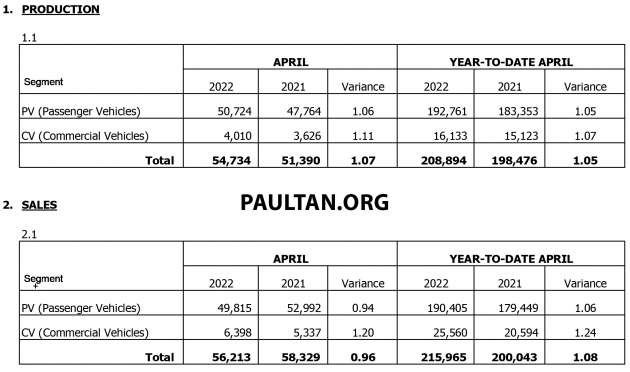 April hasn’t exactly been a good month for the automotive industry, if the Malaysian Automotive Association’s (MAA) recently-released vehicle sales data is to be believed. Despite consumer sentiment continuing to return in a big way since the start of the COVID-19 pandemic, supply bottlenecks mean that carmakers are still unable to fulfil the potential evident in their backlogs of orders.

The upshot is that sales fell 23% over the previous month to 56,213 units, despite the weeks leading up to the Hari Raya Aidilfitri holidays generally being a fruitful period for car companies. Tellingly, this figure also represents a decrease of 3.6% compared to April 2021, although year-to-date sales thankfully remain ahead by eight per cent or around 16,000 units over last year at 215,965 units.

The poor performance was attributed to continued global semiconductor shortage that severely affected several firms – including the top two, Perodua and Proton – as well as other component shortages and shipment delays. Many companies have also already fulfilled their sales in the previous month in time for the end of their financial year on March 31, contributing to the shortfall.

Worryingly, MAA expects May sales to be maintained at the current level as the chip shortage and shipment delays continue, with the shorter working month as a result of the Raya festive season also having a knock-on effect.

I went on Royal Caribbean's 7-day cruise to the Bahamas. I felt completely safe, but my heart broke seeing how hurt the tourism industry is.

‘Capable of doing things on our own!’ AUKUS proves Brexit Britain is a success without EU