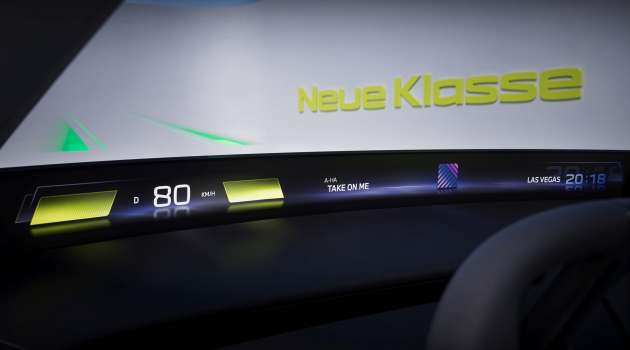 The BMW i Vision Dee was the highlight of the German carmaker’s booth at this year’s Consumer Electronics Show, but we were also given at what lies ahead. At the event, the company also showcased a next-generation head-up display (HUD) that will make its debut on a vehicle (reportedly the 3 Series-sized i3) based on its forthcoming Neue Klasse EV platform.

In a teaser image, we find a cabin that is different from the CES concept as it sports a display that spans the entire width of the dashboard, appearing as a single unit rather than individual screens visually linked together.

There doesn’t appear to be other screens in sight, which could mean the brand is steering away from large displays that are popular among automakers. Meanwhile, ahead of the driver is the actual HUD that appears to incorporate augmented reality (AR) technology to display information in a more immersive way on a larger projection area.

BMW won’t provide further details for now, although Oliver Zipse, chairman of the board of management of BMW Group, said we can expect to find the new setup in cars by the middle of the decade.

“It is more than a vision. We bring this innovation into the Neue Klasse. As early as 2025 – the year after next – our customers will be able to experience this completely new technology in their vehicles,” he said.