Last week’s Stellantis EV Day delivered nothing short of a tidal wave of electric vehicle plans from more than a dozen brands under the FCA and PSA umbreala. Taking stock of it all in a matter of hours or getting a bird’s eye view of the announced strategy for all the brands over the next half decade might have been relatively straightforward at the end of the day, but since the automaker’s plans were revealed in relatively short presentations, many minute details remained obscured. Such are the limitations of covering so much in a single day among the group’s 14 brands, perhaps even to the point that the big picture can remain unclear after a shotgun blast of corporate strategy stretching to the end of the decade.

“We had been in the dark for quite some time about Stellantis’s electrified future but their EV Day announcements came to us like Christmas in July,” Robby DeGraff, Industry Analyst at AutoPacific told Autoweek. “Finally we have an idea of what to expect. Our market’s brands under the Carlos Tavares’s umbrella have been aging and in desperate need of electrification in order to stay relevant and current.”

So just what were the big takeaways from the Stellantis brands relevant to the U.S. market?

For starters, the automaker intends to field four battery-electric platforms among its brands, offering ranges from 300 to 500 miles each on a full charge, as well as a family of three electric drive modules. Stellantis also plans to have standardized battery packs across all the brands, as well as fast charging capability of 20 miles per minute.

“Battery packs will be tailored for a variety of vehicles – from smaller city cars to energy-dense packs for performance vehicles and trucks,” the automaker notes. “Use of two battery chemistries is planned by 2024 to support various customer needs: a high energy-density option and a nickel cobalt-free alternative. By 2026, the first competitive solid state battery technology is targeted to be introduced.”

The codenames of the four platforms themselves have also been released by the automaker, and they’re pretty straightforward if still a little short on detail. STLA Small will be a platform offering up to 300 miles of range, while STLA Medium will offer a range up to 440 miles. STLA Large is the next one, as you’ve probably guessed by now, and will offer a range up to 500 miles on a single charge. One additional platform dubbed STLA Frame will also offer up to 500 miles, meant for trucks and light commercial vehicles.

This platform lineup will be paired with three different electric drive modules (EDM), which will combine the gearbox, motor and inverter, and can be configured to rear-wheel drive, front-wheel drive and all-wheel drive layouts as needed, in addition to the 4xe hybrid platform.

“Beyond the colossal investments and questionable tag lines for each brand, the biggest piece of news here is the rollout of Stellantis’ new STLA architecture,” DeGraff added. “Several of the products in Dodge, Ram, Jeep, and Chrysler’s lineup sit atop old platforms that aren’t setup for serious electrification. By ditching those and focusing on just four capable iterations of the STLA platform, that gives these brands such more flexibility in terms of guaranteeing electrification (whether mild-hybrid, PHEV, or full-on EV) in every segment possible. From commercial delivery vans to a confirmed all-electric Dodge muscle car that’ll be sure to scorch pavement, Stellantis knows it has its bases covered.”

On the industrial side of things, Stellantis also plans to have a total of five gigafactories divided between North America and Europe, and to invest €30 billion through the year 2025 in both electrification efforts, and in over-the-air update compatible software.

When it comes to specifics, the automotive world learned that Ram plans to field a battery-electric 1500 pickup by 2024, a little behind the other big Michigan manufacturers, while the Dodge brand plans to offer a performance muscle (or rather eMuscle) car in the same general timeframe, likely a coupe. Jeep is heading in the electrification direction as well, through a full lineup of 4xe PHEV models and a battery-electric model on the way. Just what that battery-electric model would be was not made clear, which seemed to be a common theme in a number of the automaker’s brand-by-brand presentations.

The clearest view of an EV concept arrived thanks to Chrysler, showing off a remarkably ready-looking electric crossover on the STLA Large platform, complete with a view of the interior. Despite a few good glimpses of this concept, details about it (including its name) were not in generous supply. The most striking thing about it was, it looked just about ready for production. 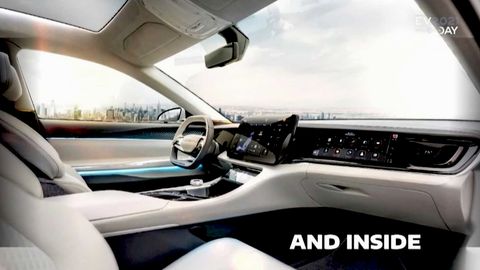 But it also wasn’t lost on industry observers that Stellantis’ plans were not only short on detail, but also set further in the future than those of its competitors. Electric trucks from GM and Ford are much closer on the horizon.

“It was only a matter of time until Ram showed off teasers of its 1500 EV and confirmed it’ll be here around 2024 on the STLA Frame underpinnings,” DeGraff points out. “Ford’s F-150 Lightning looks like an easy winner our to the box, but Ram’s pledging for a range of up to 500 miles- some 200 more than the blue oval. Range especially remains a huge deterrent for truck owners who casually tow or haul things like campers or boats far away from home on weekends to places where there’s likely not a spot to quickly recharge. As more automakers plunge into a BEV future, big range numbers will ultimately be the “make it break it” for electric trucks.”

Jeep’s announced plans perhaps offered the most concrete detail during the EV Day, but also served up a couple of mysteries, too, while also likely reflecting Jeep’s actual beliefs on just when its buyers will want a battery-electric model: Not exactly next week. Two mystery vehicles were glimpsed in the presentations, including a larger-sized model with a spare tire on the rear gate that does not look like anything in today’s lineup, as well as what could be a pocket-sized EV offering positioned somewhere alongside the Renegade.

“Carefully watching Jeep’s presentation reveals a tall larger boxy 4×4 sporting a spare on the tailgate along with a pint-sized ‘Jeepster’ that looks like a perfect competitor for Suzuki’s Jimny, which we depressingly don’t get here,” DeGraff notes. “With the recent burst of shoppers hungry to buy capable 4X4s that are rugged for outdoor adventuring, it’d make sense for Jeep to expand its lineup to include a 4Runner-sized offering and even a tiny sub-Wrangler off-roader. Again, Stellantis’ four STLA platforms will allow this to happen.”

In sum, Stellantis certainly has EVs on the way, but details and timelines for their arrival remain distant or murky, with the main bulk set to arrive towards the middle of the decade. But it still remains to be seen whether Stellantis’ domestic EV offerings will be a little late to the EV party, or rather right on time, given the share EVs enjoy in the U.S. at the moment. There are certainly some sobering examples of automakers offering models that were too early in the past decade, and too inconsequential to a company’s bottom line. This is something the automaker and its 14 brands have to taken into account as well, as the era of early adopters with deep pockets comes to a close.

Log in to the comments and sound off on all the latest Stellantis news.

Rick Owens Will Be ‘Live and Loud’ in Venice, Not Paris

Reason for Abiteboul's exit was a 'bit complicated'