Lando Norris has been McLaren’s shining star for most of the season, taking four podiums, but in Italy it was Daniel Ricciardo who ended the team’s nine-year wait for a win.

Norris, who has spent his entire Formula 1 career at McLaren, dutifully revelled in the team’s celebrations 13 days ago but on Saturday at the Russian Grand Prix it was his turn to be center stage. Norris claimed a surprise pole position in a wet/dry qualifying session at the Sochi Autodrom, with Ferrari’s Carlos Sainz an improbable second, and Williams’ George Russell an equally unexpected third.

It was not only the first pole position in Formula 1 for third-season driver Norris but also the first pole for McLaren in F1 in 3,227 days. McLaren’s last pole was earned by Lewis Hamilton at Brazil in 2012.

But how did it happen?

Max Verstappen, winner of eight of the 14 poles in 2021, entered the day knowing he’d start last due to an engine penalty, so completed just an installation lap to ensure he qualified.

Charles Leclerc, who has claimed two pole positions this year, was in a similar predicament.

And then there was the weather. Heavy rain lashed Sochi Autodrom through Saturday, forcing the cancellation of final practice, with support events Formula 2 and Formula 3 also binned. It is the worst weather Formula 1 has experienced at the coastal venue since Sochi joined the schedule in 2014.

Conditions improved in time for qualifying to begin on schedule and drivers needed the mixed-weather Intermediate tires for most of the three-stage session.

But midway through the Q3 pole shootout the crossover point was reached and it was dry enough for slicks—and in came the drivers to make the move.

World Champion Hamilton, at that point fastest, made an uncharacteristic error by sliding into the wall as he entered pit lane, copping damage to the left-hand-side of the car. Mercedes was able to undertake quick repairs but even without that incident he had insufficient time left to put his slick tires into the best operating window for the conditions. He then spun on his sole hot lap on slicks anyway. 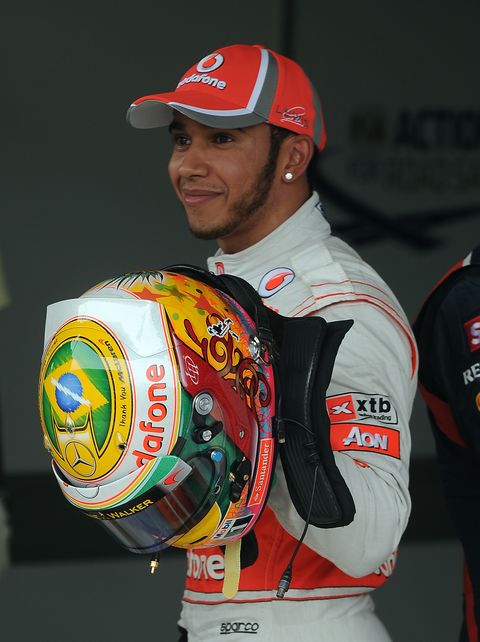 Norris, who had been second in the wet, used his slick tires to move fastest, while other early converts to the slicks Sainz and Russell slotted in behind the Briton.

“It feels incredible,” said Norris. “To dream of this since I was a little kid… but now for it to happen. I guess there’s been a few times this season where I’ve been close and had the opportunity but I’ve missed out, sometimes my mistakes, sometimes the team, but today we put it together. One thing that makes it even better is the risk you have to put into a lap like that, the unknown of going into a corner and just hope for the best, if you make it through on the exit, you’re like one down, more to go! It all paid off in the end.”

Hamilton fessed up to his mistakes but still has a realistic shot of win No. 100 from fourth on the grid. None of the three drivers up front have won a race while Hamilton’s Mercedes team is undefeated at Sochi Autodrom in seven attempts.

“I’m really sorry to all the team that are here and the ones back at the factory because that’s not what you expect from a champion,” he said. “Very poor grip, very slippery when you don’t have any temp. I was losing temp during the lap. Twice in the wall, that’s very rare for me.”

With four different teams in the top four, and some surprising names up front, the long 800-meter plus run down to the first braking point is sure to be one to watch in the race on Sunday.

How They’ll Line Up Sunday

How I got hooked on sports: Radio and a visit to old Metropolitan Stadium – The Denver Post