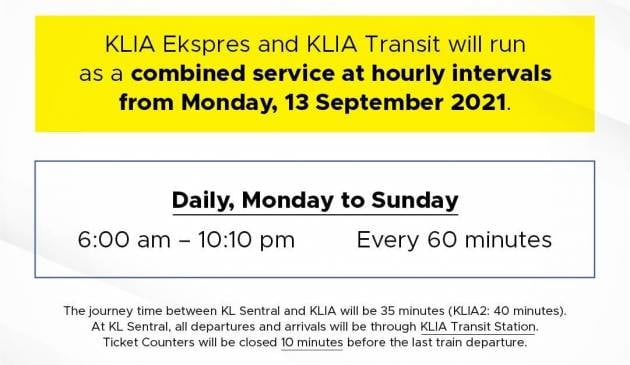 Have you been out and about? If you have, you would have noticed that traffic is “back to normal” and the world has resumed, so to speak. We can even fly to a beach holiday in Langkawi now! And with that, as a sign of the times, Express Rail Link (ERL) has announced that its KLIA Ekspres and KLIA Transit trains will start running again from September 13, next Monday.

If you’re one of the lucky ones who are hopping onboard a plane again after so long, here’s a reminder – the journey time from KL Sentral to KLIA is 35 minutes. Add five minutes to that if you’re heading to KLIA2. Ticket counters will be closed 10 minutes before the last train departure.

To recap, KLIA Ekspres and KLIA Transit became a combined service with reduced frequency on October 17 last year, in conjunction with the conditional movement control order (CMCO). Subsequent versions of lockdown dried down traffic to and from the airport, and on June 4, ERL announced the temporary suspension of the service until further notice.

Well, here’s the notice, and perhaps a sign that Malaysia is back on the road to recovery as well.

Brazilians bang pots in protest as another 2,500 die of Covid-19

The Spot: The wait is almost over for a first look at new congressional maps