Formula 1 is returning to the United States after a wait of two years, but for the championship’s sole American-licensed team a prosperous homecoming is unlikely.

The team founded by businessman Gene Haas is resigned to finishing last of the 10 teams in Formula 1’s standings for the first time since its debut in 2016. Haas entered the campaign knowing it was in for an uninspiring and unrewarding year. It expected to be last, doubted points would be possible and turned its attention to the 2022 campaign really before the 2021 season kicked off.

The root of the slump can be traced back to a perplexing 2019 car that was poorly developed. That situation was accentuated when 2020, and the pandemic, arrived.

Formula 1’s radical new-for-2021 regulations were delayed until 2022, while Haas turned off the money tap until the uncertainty caused by the pandemic cleared. Haas’ 2020 car, in effect an evolution of the unloved 2019 machine, went almost undeveloped. That package was then modified just to comply with tweaked regulations introduced for 2021. In Formula 1 if you stand still you move backwards, and Haas has done exactly that, running 22 Grands Prix without a point. That streak could reach 28 races by season’s end.

But there is light at the end of the tunnel. Haas diverted its resources into its 2022 project, and used the setback as an opportunity to assess its predicament. The team expanded its design base in Maranello, Italy, on the campus owned by long-term partner Ferrari, who supplies Haas with its power unit, gearbox and all non-listed parts as permitted under the regulations.

Ferrari’s former chief designer Simone Resta joined as technical director to oversee the development of the VF-22 car. It has maintained a partnership with chassis company Dallara, based in Varano, Italy, while there is another engineering group in Banbury, U.K., with the team’s headquarters still in Kannapolis, North Carolina. Processes have been streamlined and clearer structures are in place.

The team will be improved next year. Right?

“We knew going into this year where we would be,” said pragmatic team principal Guenther Steiner in an exclusive interview with Autoweek.

The recent work undertaken behind-the-scenes reminds Steiner, he says, of Haas’ first few years of existence. He has been at the helm throughout Haas’ journey.

“We are building up again. In ‘19 our car wasn’t strong, in ‘20 the decision was taken pretty early in the season that we stopped development because we didn’t know where COVID was going, we didn’t know where F1 was going. When we knew where we wanted to go—that we want to stay in F1—it was after August, and there was no point to try to fix a car that wasn’t strong from the beginning, so we decided to focus on ‘22.

“We then just took a step back and said ‘what do we need to do to be again where we were in the first years of Haas F1?’ And that’s where we started. And I think we have made the team stronger than before.

“We now have a permanent office at Maranello, and between aero and design it’s about 80 people. We still work with Dallara, because they’re a good company with a lot to contribute, but we shifted the people from being mainly at Dallara’s base to being Haas people at Ferrari, along with people from Ferrari. That’s what we did to make sure we give ourselves the best chance to be back where we want to be next year.”

An early switch to 2022 won’t necessarily give Haas a huge head start next season. Other teams have done the same thing and prioritized 2022 over 2021—aware of the long-term opportunity that the effective reset present. And while the new-for-2021 budget cap will help the smaller teams in the long run, its short-term impact is minimal.

“We had to build up again and that took some time,” said Steiner. “I wouldn’t say it’s an advantage (switching early) but at least we reduced the disadvantage as much as we could.”

It is also easy to overlook that fact that Haas, while already preparing for year seven, is still Formula 1’s newest entrant. Five other teams in the 21st century that started from scratch—Toyota, Super Aguri, HRT (also known as Hispania), Virgin Racing (which became Marussia then Manor) and Team Lotus (which became Caterham)—have all gone. Getting a Formula 1 team up and running, and then surviving, is not an easy task.

“As a team we have now more experience,” Steiner said. “But we still have ways to catch up to the teams (that have been) here for a long time. They have processes refined, and every year they refine them more. The margin they have to get better is smaller, and we still have better steps to make, but it’s still a few years away.”

Owner Gene Haas has kept a low profile of late, only sporadically attending Grands Prix, and has avoided the microphones. Haas, who last month visited its Maranello, Italy, base with Steiner, operates in a realistic landscape but has stressed the need to recover.

“His expectation is not to be where we are now and to go back to where we were before 2020, when all these things hit us,” Steiner said of Haas’ hopes. “So he wants to go back to that we are competitive in the midfield, that’s what he wants. He’s not a guy that gives us a target ‘you need to be fifth, sixth, seventh, whatever’, because he knows it’s a moving target as we don’t know where the other teams are (going into 2022). It could be very easy to be high up but it could be very difficult being high up. We need to get again respected, which we were before, and just go back to our old form like we were when we came into Formula 1.”

“We need to get again respected, which we were before, and just go back to our old form…”

It is that prior form that provides encouragement. Before its slump began in mid-2019 Haas was a formidable midfield competitor as it defied expectations by battling in the midfield. It finished eighth in its first two years of existence, then surged to fifth in 2018, scoring 93 points, coming close to the podium on occasion.

“I don’t want to sound overconfident, but we have done it before, and we can do it obviously, we have a new group of people but there’s still a lot of the old people with us as well, they’re not all new,” says Steiner. “I’m pretty confident, it’s more like I don’t know how strong the competition is going to be next year compared with how they were in ‘16, ‘17 or ‘18, so we have to wait for this. But from our side I think we are in a good place again and I see very similar things happening like (what was) happening before (2020).” 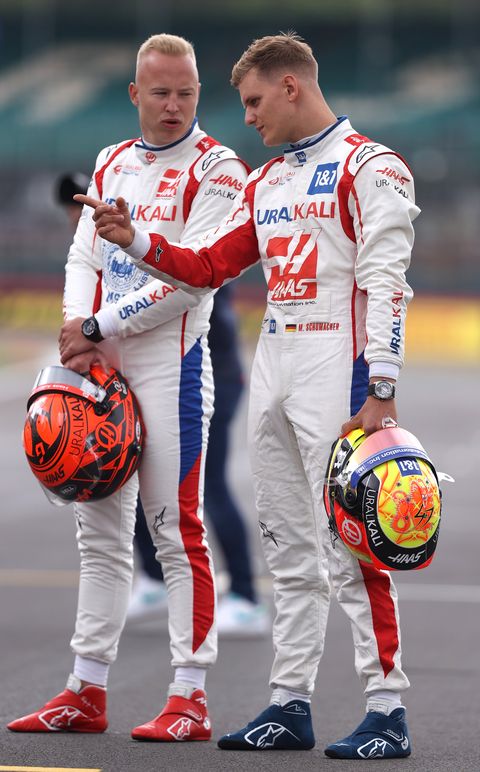 The responsibility of delivering Haas’ progress on-track will rest with Mick Schumacher and Nikita Mazepin. Their Formula 1 race experience is limited compared to rivals, having both debuted in 2021, but Steiner has confidence in the pair of 22-year-olds.

“I think they do the right things at the moment; they try to learn as much as possible,” Steiner says. “But the proof is in the pudding and the pudding is next year. So we will see it then what is happening. But I’m confident they can deliver, and that was part of the plan for our transition year: that we develop the guys and they are ready for next year. We planned this so I hope we can pull that one off as well, like pulling off a better car.”

While Haas is focusing on 2022, the upcoming U.S. Grand Prix at least provides some home comforts for the first time since 2019. Austin’s event is sold out, and there’s more to look forward to, with Miami joining next May.

“I think the U.S. is getting more and more important to Formula 1, it’s a big market, we are the only American team,” says Steiner, who resides in the U.S. “We don’t prepare any differently (to other races), but it is nice to see the fans. We have a good fanbase, we have Haas Hill, and people have been coming for years cheering us on and that’s nice to see.”

There’s still no American driver in the pipeline, but Steiner says Haas will take a look if and when any prospective candidates appeal. But in the absence of a homegrown talent, fans at least have Haas to support—even if they’ll have little to cheer this year.

“I think just believe in us,” Steiner says on what he’d say to Haas supporters. “We did it before when we came into Formula 1, before we started in ’16. We were not given a chance, we were told ‘this will never work’, ‘we will never score points’, and ‘you’ll be done in two or three years’. We scored points in our first race, finished fifth in our third year, we are still here in our sixth season.

“There are a lot of positives. Yeah, ‘20 and ‘21 were not good seasons for us but people normally don’t get stupid within a few years. We will come back, we will bounce back, we don’t know at which level, but we are here to stay, we are here to fight back, and I am pretty confident that it will happen.”