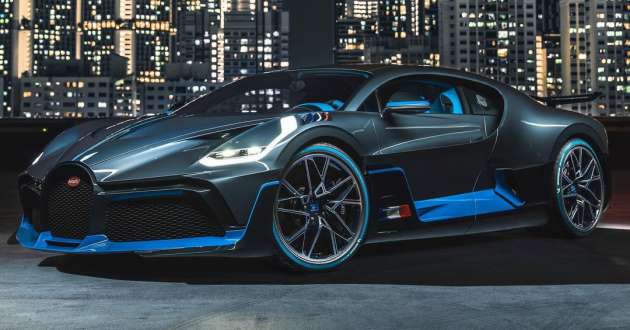 The Bugatti Divo was revealed back in 2018 and is one of the rarest hypercars in the world, with only 40 units produced for the entire world. With a base price of five million euros (around RM23.7 million), the track-focused version of the Chiron was sold out in its first day of availability, and one of the lucky few that managed to secure a unit is a Malaysian and avid car collector, Chin Jit Pyng (JP Chin).

In a video posted by JPM Collection recently, Chin talks about his new Divo, which took two years to be built and was delivered to Singapore in June this year, making him possibly the only person to own one in the Southeast Asia region.

Why not Malaysia? According to Chin, cars are “tax-free” in Singapore if they are not registered and they don’t require an AP to be brought in, unlike here. Currently, the car is being taken care of by Wearnes Singapore, which holds the Bugatti franchise for the Southeast Asia region.

Chin adds that cars like these are bought as investments, so having properly trained personnel and facilities to maintain them are important. Besides the Divo, he also has two other limited-production cars in Singapore, namely a Chiron and a Porsche 918 Spyder.

With the keys to such exotic machines, Chin admits that he has never driven the three cars he has in Singapore. However, he has been to Bugatti’s headquarters in Molsheim, France to experience a Chiron for himself back in 2017.

Chin says in the video that he hopes to bring some of his cars to Malaysia one day as a public attraction for public viewing or to drive it on the Sepang International Circuit, although this is highly dependent on whether he can secure the necessary paperwork from local authorities.

As for how he built his car collection to include a Divo, Chin said he first bought a Ferrari Enzo in 2000 after selling his company, which was then followed by a Lamborghini Murcielago. As more cars came in, his reputation as a car collector grew and he formed a relationship with Bugatti when he purchased a Chiron.

He then convinced some friends to buy the Chiron too, which made Chin an ambassador of sorts for Bugatti – he hosted the Malaysian introduction of the Chiron Super Sport in 2018. As a result, when the Divo was revealed, he was one of a few customers that received a special invitation to buy it – only current Chiron owners are eligible to buy a Divo.

What’s next? Well, Chin isn’t saying outright, but he did hint that the car recently debuted at this year’s Pebble Beach Concours d’Elegance and is possibly the fastest track-only car in the world. All signs point to the Bolide, which is Bugatti’s extreme track-only racer unveiled in November last year.

Chin also said he specifies his purchases carefully as they are investments, so any personalisation options are carefully chosen (launch colour, specific interiors) to ensure their values are not heavily affected. The only exception is his Chiron, which has a plaque inside the cabin bearing the JPM logo.

Chin says it’s not always cars that cost millions that he looks at, as he has asked his staff to source a Perodua Kancil because he believes it to be a future collectors’ item. If you’re curious about what cars he has in his collection, check out JPM Collection’s Instagram page.

‘Which was it?!’ Theresa May gives Boris Johnson epic dressing down on Sue Gray report