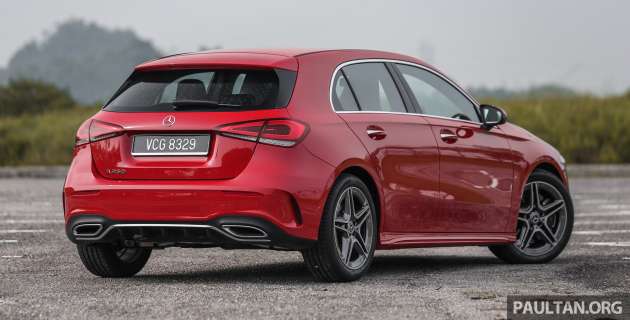 We knew this was coming the moment we found out that the Mercedes-Benz A-Class would only be assembled locally in sedan form. It has been confirmed that with the launch of the CKD V177 four-door, the W177 five-door hatchback has been discontinued in Malaysia and can now only be ordered on an indent basis.

Mercedes-Benz Malaysia’s (MBM) head of sales and marketing Michael Jopp broke the news to Malaysian media during yesterday’s CKD launch, while also confirming that any orders for the hatch will come with new (read: increased) pricing. However, the company will continue to bring in stocks of the AMG A 35 and A 45 S due to high customer demand, he said.

“[We have] fantastic demand for the AMGs; the 35s and 45s are exceeding our expectations. It’s about one and a half years since we launched them and they remain in extremely good demand – I am positively surprised, actually. So definitely these cars will continue to come in,” he said.

On the subject of the AMG models, Jopp said that MBM is looking into assembling the hot hatches locally as well, although nothing has been finalised yet. “I will say let’s take things one step at a time. Even the launch that we are doing today was initially planned for much earlier – because of the lockdown, all the delays we unfortunately had to face, we are only launching now.

“We are looking into the AMGs as well, based on the success that we had on other localised AMGs; it’s not finally concluded yet,” he said.

‘We’re in the middlle of a war!’ Truss backer explains why ONLY she can be trusted as PM