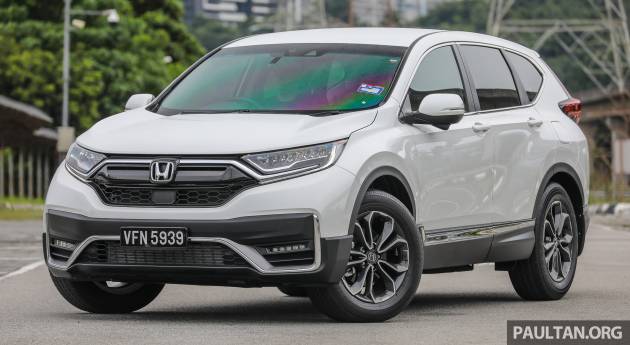 When it arrived on the local scene in July 2017, the fifth-generation Honda CR-V had its work cut out for it, that of regaining traction in its segment, one that had been eroded despite the best efforts of the fourth-gen RM.

That the SUV made inroads quickly with buyers was due to clever packaging, with turbocharging and what was then new, class-leading driver-assist tech being the main draw items. The gains were visible, as shown by the number of RWs on the road a year or so into the game. This household even joined that parade, replacing a third-gen RE with a 1.5 Turbo 2WD variant in 2018.

Of course, like with all things, a mid-cycle refresh helps keep the ball rolling, and that’s what came about last November when the facelift made its debut here. Are the minor tweaks enough to ensure the CR-V has what it takes to keep momentum going until the next one comes along? We take a closer look at the rework, one that has been inevitably delayed due to the pandemic. 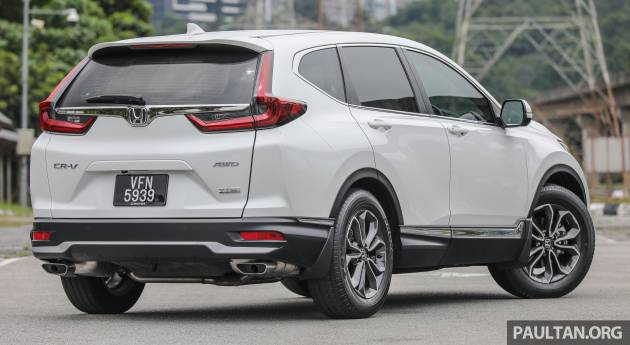 When it started out, there were four variants of the SUV to pick from (base 2.0 i-VTEC 2WD, 1.5L Turbo 2WD and 4WD, and 1.5L Turbo Premium 2WD), but this has been whittled to three with the facelift. The base variant continues to be a normally-aspirated R20 2.0 litre version, now known as the 2.0 2WD (currently priced at RM139,913 on-the-road without insurance, with SST exemption).

Of the turbo variants, the standard 2WD (the one without Sensing) has been dropped, while the 4WD version (RM162,910) goes the Premium route and gains Sensing, making it and the 1.5 TC-P 2WD (RM157,616) the two blown offerings in the line-up.

A minor nip-and-tuck on the outside

Increasingly, facelifts have become less comprehensive in their alterations (both inside and outside), with automakers inevitably finding it easier to put new thought – and money – into a fresh slate that is the successor. No surprise then to find that the facelift introduces very minimal external styling changes, but these keep it very serviceable, looks-wise.

The front gets a new bumper, which introduces a reprofiled lower apron and a chrome accent that now runs across the entire width, culminating in a vertical flourish that bookends the strip. Elsewhere, the grille ditches chrome for gloss black, which helps sharpen the front end presentation quite nicely.

The rear also gets a similar treatment, with a bumper featuring a redesigned lower section. A slimmer silver trim strip replaces the chunkier design of the pre-FL, and trapezoidal exhaust finishers take over from the round units seen previously (on the turbo variants). Also, the LED combination tail lamps are now dressed in a darker tint, offering less of a visible chrome presence under the array.

There’s also a wheel design change, but only for the turbocharged variants – a much cleaner looking new five-split spoke unit replaces the previous turbine-style unit. The base 2.0 2WD retains the 17-inch wheel.

Step inside and you’ll find the cabin to be familiar. Very familiar. Indeed, with the exception of one minor switchgear placement change, everything is as it was on the pre-facelift, terrible faux brown wood accent trim included. That sole revision is with the front USB ports, because we don’t get wireless charging on this one, unlike Thailand.

On the pre-FL, the 1.5A and 1.0A receptacles were housed inside the storage cubby area (alongside a 12V outlet and HDMI connector slot). The USB ports have now been moved out of the bin to the centre console just below the gear lever, replacing the 12V outlet that was previously there (on the left hand side of the panel). 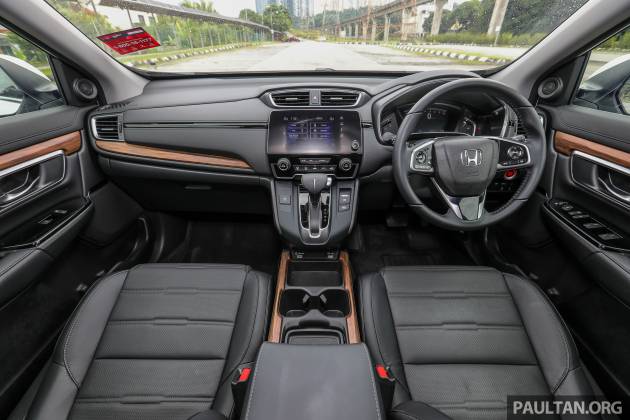 At first glance, it looks neat enough. It presents easier reach to the ports (gaining access to them on the pre-FL needed some real thumbwork), but it also means that you have wires dangling about in plain sight, unless you have more flexible cables and route them on the sides of the central console.

It really depends on how you work with cables. If you’re the sort to leave the cables captive and in place (like we are), the old layout is a far neater proposition – you simply stash it in the storage bin and retrieve it when you need it. If you’re the type that always unplugs the cable and bring it along with you, then the new solution would be just the thing. You do get more usable storage area for cards/tickets and what-nots with the 12V socket removed, so that’s a plus.

As for the overall layout, the cabin has in general aged well, four years in. Materials remain decent to touch and sight, even if it’s behind the likes of Mazda, which has upped the ante considerably in this regard. However, interior space remains the CR-V’s forte – in this regard, it’s undeniably the class champ, especially at the rear.

What’s in the kitbag 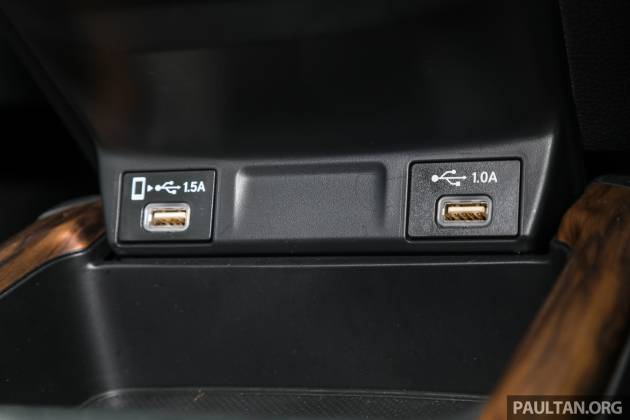 Also on, a seven-inch TFT instrument cluster, an eight-speaker, seven-inch Advanced Display Audio system with wired Apple CarPlay/Android Auto support and a reverse camera. The ADA is perhaps starting to show its age, nowhere more so than in its presentation and graphics – such is the pace of tech that what was contemporary in 2017 looks slightly distant now.

Still, it works like a charm from a functionality viewpoint – phone pairing is fuss-free, and Android Auto links up cleanly via the wired route, with good integration aspects. No changes to the user interface from the pre-FL, but the current system now allows you to prioritise paired phones. It also voices out a “The Power of Dreams” line from the unit each time you start up the car. Thankfully, it is fairly muted, so you’ll likely stop noticing it after a while.

Elsewhere, like on the pre-FL, the 2.0 still doesn’t get auto wipers and front parking sensors, but it does get the automaker’s LaneWatch blind spot camera, which is now standard fit across the model range. It’s a handy thing to have, infinitely more usable than a blind-spot monitor.

New to the CR-V is remote engine start, but that’s only found on the turbo variants. Also, the powered tailgate now finds its way on to the 4WD; it was previously only available on the Premium 2WD, but now both turbo variants come equipped with it. The system has been improved with a hands-free opening function, with a swipe of the foot under the rear bumper all that’s needed to operate it. Works well enough, if you can remember that it’s there.

Sensing expands to the 4WD

As it was with the pre-FL, the CR-V comes equipped with six airbags (front, side and curtain), Vehicle Stability Assist (VSA), Agile Handle Assist (AHA), ABS, EBD, brake assist and hill start assist.

So, how does the facelift drive?

Essentially, the same as before. With no mechanical changes, you’d expect the RW to drive as it did, and it does. Keep it tidy and you’ll find the CR-V to be very much a neat urban mover. It drives well and the turbo mill has plenty of low end pep, which allows you to get up to pace quickly and without fuss.

Push harder and the take-up remains brisk into the mid end, but it can get raucous higher up and there’s not much fizz after a point. As it always has been, the scope is geared for progression rather than immediacy. The engine’s underlying character is mirrored by the CVT – it’s not the final word in response, but its delivery is smooth and largely efficient. 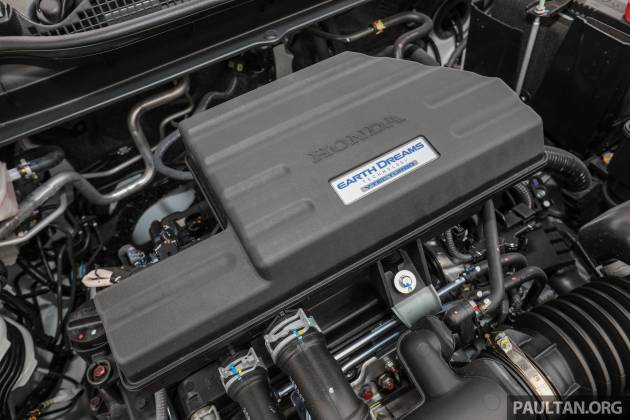 Likewise, the handling. The car responds to steering input well enough, but chances are, you’re not buying a CR-V because you want to bomb along everywhere, every day, although I’ve seen quite a few owners doing so. Its strengths lie elsewhere.

The demonstrator, a 1.5 TC-P 4WD, allowed observations to be made against the resident 2WD on a broader scale. On its own, it wouldn’t really be noticed, but as it was with the pre-facelift, there’s a greater sense of urgency from the lighter 2WD from the get-go, and you don’t have to be exceptionally liberal with the accelerator pedal to take note of that.

Where the 4WD gains back ground is how it serves up its ride and handling. On the pre-facelift, the 4WD’s differently tuned suspension presented a firmer (both primary and secondary) ride, and this was evident yet again. The all-paw setup feels better planted at speed, and the system offers better traction at a faster clip across winding tarmac, but the flipside is that you’ll have to pay for it, both in entrance fee as well as fuel consumption. For most, the 2WD will be everything they need.

As for Sensing, it’s a boon to have, what with the layer of safety it provides, but you have to pick your terrain and conditions for the entire system to shine. With consistently behaving traffic, it does, but when you get late lane changes from other cars the braking can be abrupt and rather forceful, and the ACC’s tendency to rapidly progress to the set speed in very fluid conditions doesn’t always make for a smooth drive.

Meanwhile, LKAS tracks decently, but there were quite a few times steering input assist came across too sharply. As for the low speed follow function, no complaints about its fidelity, but it still leaves too much space (about four metres) behind a car, at least from a Malaysian traffic perspective – you’ll find enough cars cutting in front of you in a crawl, to the point the driver behind you starts honking. Makes you wonder how often owners actually use the system here.

Despite the field having gotten more competitive, the facelifted fifth-gen Honda CR-V remains very much a headline act in the segment. As it was when it first arrived, the RW’s neat packaging, all-round practicality and versatility continue to provide plenty of draw and allure. Not bad going, really, four years into the game.

Covid 19 coronavirus: Covid-linked syndrome in children is growing and cases are more severe

US election: Opinion – Biden risks being a lame duck president