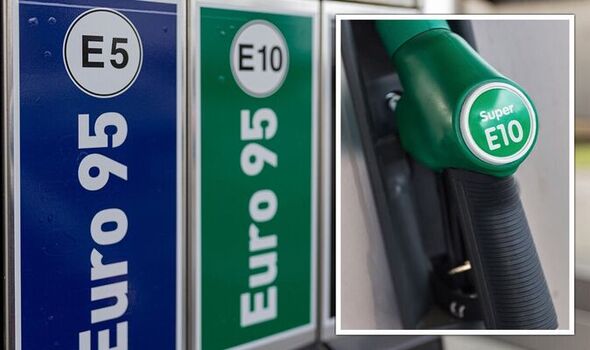 E10 petrol was introduced to forecourts in Northern Ireland earlier this month in a bid to decarbonise transport in the country. The new fuel is blended with up to 10 percent renewable ethanol and will help the country slash emissions, as it is greener than existing petrol.

The greener fuel was previously rolled out onto forecourts in England, Scotland and Wales in September 2021.

It is estimated that as many as 600,000 older vehicles manufactured before 2011 and classic cars should not use E10 because they are not compatible.

When the fuel was first unveiled by the UK Government, it estimated that motorists would see a drop in fuel economy of around one percent.

It said other factors, like driving style, the weight of the car and weather conditions would have a much greater impact.

Despite this, many drivers have reported seeing much greater margins with their fuel economy since switching from the previous standard, E5.

Will Bullen of Car Lease Special Offers spoke about how drivers could offset their fuel economy issues, simply by altering their driving style.

He said: “We know a lot of people are looking to save money right now and these simple tips are a great start to cutting costs at the petrol pump.

“Smooth acceleration and braking are the obvious ones, but we also recommend anticipating traffic lights and slow-moving traffic, rather than flooring it between each stop.

“Only small adjustments, they can have a positive impact on both your fuel consumption and bank balance, especially with drivers feeling cautious with the new E10 rollout.”

Mr Bullen urged drivers to avoid idling, as the vehicle will still burn fuel in stationary.

If a driver is in slow-moving or stop-start traffic, they should consider putting their hand brake on and turning their engine off.

The same applies when they are picking someone up or dropping them off – they should consider shutting off the engine if they are stopped for a long period.

Many modern vehicles will have stop-start technology, allowing the driver to automatically reduce the time they spend with an idling engine, if used correctly.

Speeding can also increase their fuel consumption, and of course, be dangerous to drivers and other road users.

By keeping to the speed limits and using the cruise control feature to maintain a steady speed.

It is recommended for motorists to set their cruise control a few miles below the actual speed limit in case the odometer is slightly off.

The US Energy Information Administration (EIA) claims the energy content of ethanol is about 33 percent less than pure unleaded.

It added: “the impact of fuel ethanol on vehicle fuel economy varies depending on the amount of denaturant that is added to the ethanol.

“In general, vehicle fuel economy may decrease by about three percent when using E10.”

Chinas richest businesswoman made billions and then vanished from the streets

UK holidays still in the cards for 2022 – what are the top destinations in the country?