When it comes to modifying an engine, there’s plenty of different ways to make power. One can stick to the naturally aspirated methods, or turn to adding boost or nitrous oxide. Richard Holdener decided to investigate the latter, trialing both nitrous and a supercharger on his Buick 3800 V6 with the benefit of an engine dyno for accurate measurement.

The engine in question is a 3.8-liter Buick L67 Series II V6, originally supercharged from the factory. Previously, Holdener had converted the engine to a naturally-aspirated setup running E85, with a cam swap and tube headers netting 247 horsepower at the crank, and 241 lb-ft of torque. As an L67 motor, it features slightly lower compression than the naturally-aspirated versions, down from 9.4:1 to 8.5:1 in the supercharged application.

Holdener then set about hooking up nitrous, first testing it out with a nozzle loosely pipe-clamped in place in front of the throttle body, netting 343 horsepower. Properly mounting the nozzle into a tapped hole in the throttle body improved things further, and the engine delivered 351 horsepower and 372 lb-ft of torque when the nitrous was flowing. Dyno results from the nitrous power run. Note the spike as the nitrous system is engaged.

The nitrous setup was up against a Gen V M90 supercharger, a later version of the M90 originally fitted to the L67 from stock. A 3″ blower pulley was used to spin the blower faster for extra boost, kicking things up to a full 12 psi pumped through a L32 throttle body from the Series 3 V6 for better flow. With the benefits of the E85 fuel and higher boost level, the setup netted a wild 400 hp and 384 ft-lbs of torque. 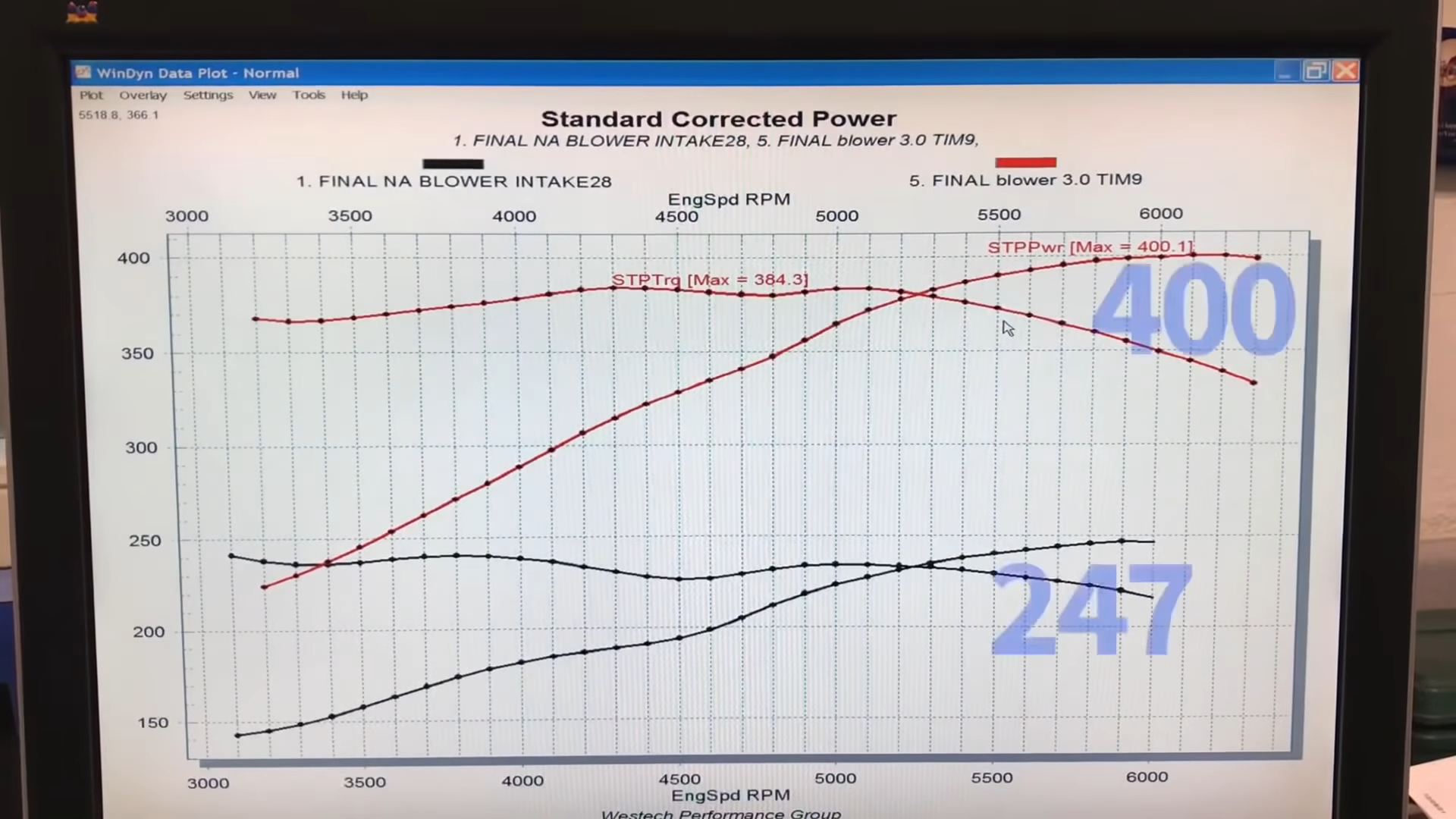 For the fun of it, Holdener decided to see what was possible with both power adders working together. The combined nitrous and boost made 565 horsepower and 549 lb-ft of torque at the flywheel, quite a number for a Buick V6 from the 1990s.

Neither setup is outright “better” than the other, as Holdner notes in the video. The supercharger did make more power, and doesn’t require a nitrous bottle to be regularly recharged to maintain that level. However, Holdener notes that the engine wasn’t really built for nitrous, and if one intended to go that route, it would make more sense to use a higher-compression build with different cams and other mods.

Holdener has plenty of experience in the tuning arena, and has the benefit of a well-equipped engine dyno to produce accurate, scientific results. We’ve seen his work before, tuning engines for big power with eBay turbos and determining just how much boost it takes to kill a 351 Windsor V8.

In any case, it shows that the 3800 V6 really does deserve its reputation as a cheap, stout motor capable of putting down good numbers. It’s perhaps only a shame that in the US, it was seen mostly in front-wheel drive applications, versus the rear-wheel drive Holden Monaros and Commodores of Australia.