Toyota’s history of trying to win Le Mans is complicated. From shock car failures to every LMP1 retiring in the space of about 60 minutes, it took all other factory teams leaving the class for it to finally take the overall victory. Even then, all three of the manufacturer’s triumphs were with the No. 8 car, the No. 7 unable to break a streak of ongoing, horrible luck. But no more! Kamui Kobayashi, Mike Conway and José-Maria Lopez have finally, in the new Hypercar era, got to stand on the top step.

Controversy managed to reign in every category, with the LMP2 field decimated in overnight accidents and finally, the No. 41 WRT car dropping out of the lead on the last lap, similar to Toyota’s own 2016 misery DNF. Meanwhile, AF Corse took victory in both GT Pro and Am categories but by no straightforward means, all Ferraris seeming to suffer technical issues in the dark. 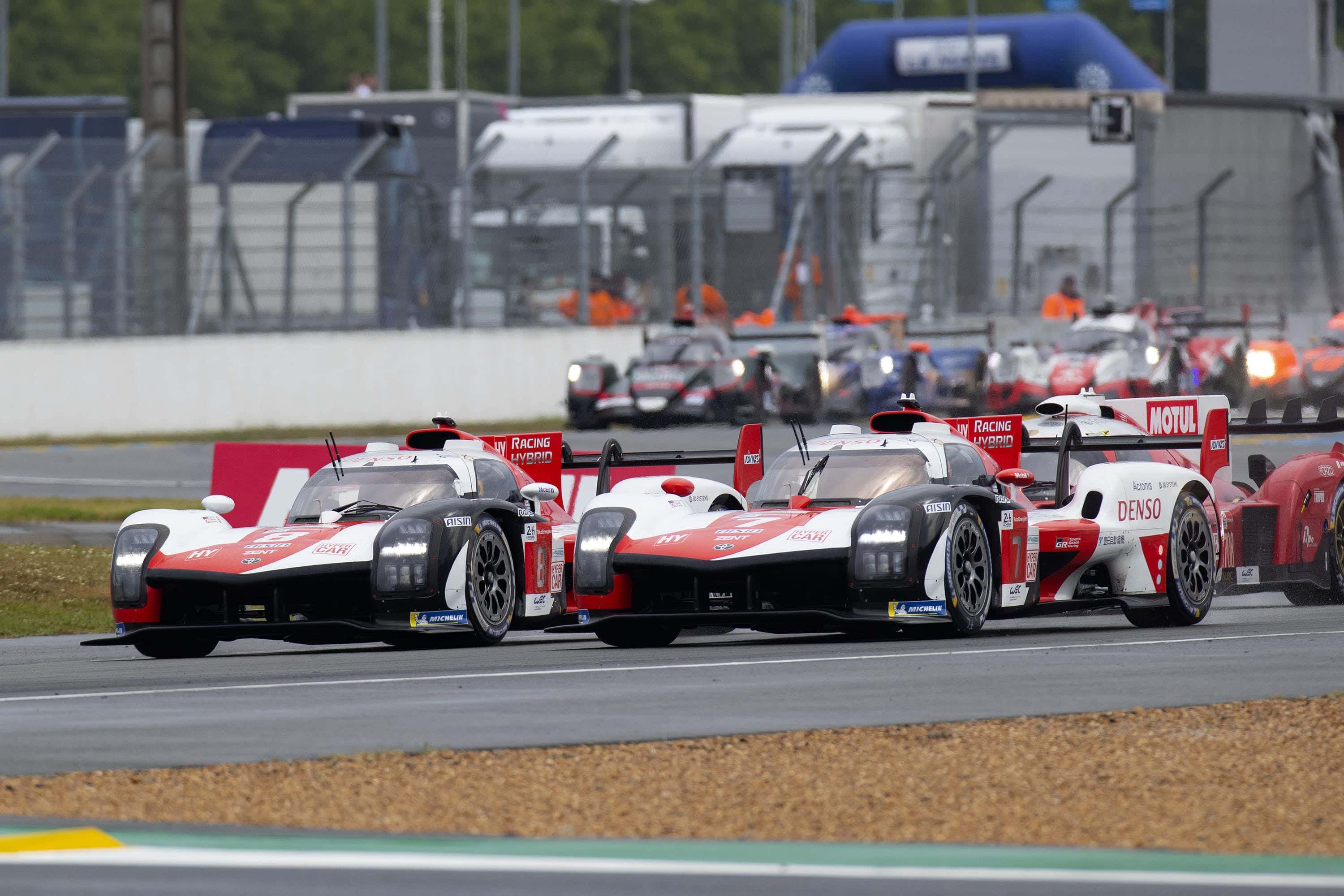 Defying the doubters, both Glickenhaus cars finished the race, although the No. 708 may have helped the No. 7 Toyota cross the finish line first. After a wet start and two formation laps behind the safety car, when cars set off in earnest, the whole Hypercar field seemed to be hellbent on going five-wide through Dunlop. Close racing on a wet track with cold tires inevitably led to a couple of misjudgments, the Glickenhaus car clipping and spinning the No. 8 Toyota through the very first turns of the first racing lap, putting the car down to 41st within the opening minutes.

There were 18 retirements, the first being a dramatic exit by the No. 98 Aston Martin as Marcos Gomes suffered an enormous impact into the tire barriers at Indianapolis. Gomes was, thankfully, able to exit the car despite rows of tires being rearranged and falling onto the hood from the impact.

The last non-finish was the sad, weird on-track giving-up for the No. 41 Oreca LMP2. WRT had been set to take a 1-2 finish in LMP2 in its first year in the category, the No. 41 comfortably ahead. It wasn’t to be though, the car totally losing power on the final lap and stranding Yifei Ye, unable to make the finish line, after a throttle sensor failed.

Cars dying on the last lap is one thing but after the No. 41’s race ended, the two cars behind were suddenly in a straight fight. Robin Frijns, in the No. 31 WRT, was narrowly ahead of Tom Blomqvist in the No. 28 Jota car but traffic around the final lap meant they were right next to each other as they came across the line. Frijns kept the lead but nearly took out the flag-waver, who clearly wasn’t expecting such a close fight over the finish line.

Thirty-four of 62 entries, across the GT and LMP2 categories, were pro-am. Driver minimum stint rules mean that amateurs were, in theory, set to put in at least 204 hours of driving across the race—ignoring the fact some retirements will have cut that short, that’s a hell of a lot of time behind the wheel at Le Mans for relatively inexperienced racers.

When you throw in unpredictable weather—the track getting wet and drying repeatedly, including overnight—that’s a heck of a big ask and goes some way towards explaining why there were so many crashes. The amateur drivers definitely can’t take the blame for all of them, though, with LMP2 drivers in particular navigating through an enormously packed field for the category and having issues in the dark, including a few genuinely disturbing crashes.

The all-female Richard Mille racing team left Le Mans empty-handed, through no fault of their own, when Sophia Flörsch was collected by an already-spinning Franco Colapinto, flung across the track and then hit again by Racing Team India Eurasia’s LMP2. The hit was hard that it set off the g-force meter in the car. Flörsch was fortunately ok but it showed how quickly a mistake could turn into a pile-up with such a busy field and tricky conditions.

One of the five category winners was pretty much uncontested, but definitely not unchallenged. Le Mans’ Garage 56 is used by teams who are trying something so new that they can’t comply with the technical regulations and was, this year, occupied by a heavily adapted LMP2 operated by SRT41. The first Garage 56 entry in half a decade, the team is owned by quadruple-amputee Frédéric Sausset and ran with two paraplegic drivers, former motorcycle racer Takuma Aoki and Nigel Bailly. They, of course, came first in their category and 32nd overall.

Got a story tip? Mail me on [email protected]