Amy Katherine Larko and Blake Falanga, best friends since seventh grade, made a pact in 2011, the beginning of senior year at New Trier High School in Winnetka, Ill. If neither was seeing anyone seriously they would go to the senior prom together.

“I met a girl today,” Mr. Falanga told his mother four years earlier after junior high school one day. “Her name is Amy.”

“I never had a friend that was a girl,” said Mr. Falanga, who has a younger sister. “She was super easy to talk to. We were friends, then best friends.”

A mutual friend had introduced them during a Thursday running class, and all three ran together.

“He was smiley, bubbly, upbeat and had a contagious personality,” said Ms. Larko, who grew up with two older brothers, and didn’t find it “weird” being close friends with a boy.

They lived five minutes from each other in Wilmette, Ill., a suburb of Chicago, and hung out with the same group of friends.

“She was my first kiss in eighth grade,” he said. “One kiss and that was it.”

They remained best friends, and would run along Lake Michigan or the Green Bay trail and skate or cycle around town.

“She was a big boyfriend person,” said Mr. Falanga, more into rowing practice than dating in high school. “She told me every detail of every relationship.”

After she broke up with her boyfriend a few weeks before the senior prom, they stuck to their pact, and went together. He wore a suit with a pink tie to match her bright pink dress.

At their friend’s all-night after-party they had their second kiss, this time not a momentary blip.

“I realized I had feelings for her,” he said, and a few weeks later they had their real first date at Buffalo Wild Wings in Evanston, Ill. 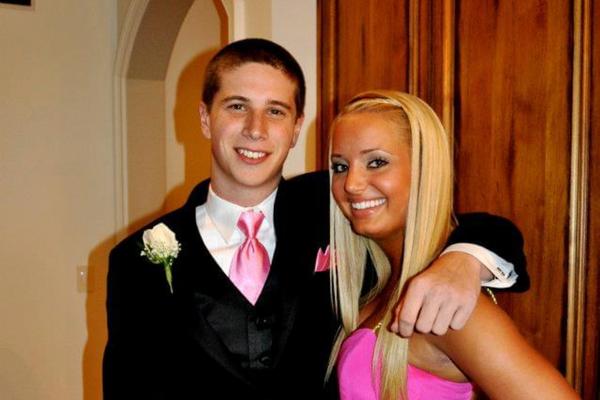 They officially began dating two weeks before graduation, but no one thought it would last into college — she went to Indiana University at Bloomington and he to the University of Michigan, about a six-hour drive. They saw each other once a month at either school or back in Wilmette.

“My parents were high school sweethearts,” she said. “‘Make sure you have no regrets,’” she recalled them saying.

So they put themselves to the test for a year with an open relationship, trying to see other people.

“It would be weird if we didn’t say good night,” she said, and they texted everyday. They got back together, exclusively, senior year.

After college they each lived in Chicago with friends, where he worked at a freight brokerage company, and is now an implementation specialist at Mastery Logistics Systems, a cloud-based transportation management system for freight companies. She spent two years based in Chicago as a management consultant, but worked in Los Angeles fours days a week.

“It eased us into being together,” said Ms. Larko, now the manager at the Larko Group, a national staffing agency that was founded by her father in Chicago.

The couple, now 27, moved in together in September 2019 with “a look toward the future,” said Ms. Larko, who is taking the groom’s name.

She soon talked about being engaged and getting a dog.

His response: “You can talk either about a ring or a dog.”

She chose the ring. (Talk about a dog is picking up again.)

He proposed a couple of days after Valentine’s Day 2020 with a delayed gift: a book of photos of them since seventh grade. The last page said: “Will you continue this journey with me?”

They planned to get married April 17 at the Fairlie, an event space in Chicago, with 250 guests, but amid the pandemic they turned to a more intimate setting, but kept the date.

Nick Killeen, a Universal Life minister and a childhood friend, officiated at the home of the groom’s parents in Chicago, before immediate family, their best man and maid of honor.

“It felt good and reassuring,” he said. “We were so stressed this past year. Waking up the next day, it’s her and me forever. And, we’re still best friends.”

China’s secret weapon’ to spy on West exposed ‘Isolate the main enemy the US!’