I packed my bags for a trip I never expected to take, to a place I never imagined I’d visit.

Three months earlier, on a Sunday night in early January 2019, my 22-year-old daughter, Maggie, walked into our living room and sat down on a love seat facing my wife and I as we watched TV.

“I’m getting married,” she announced.

I panicked. A recent graduate of the University of Connecticut, she had met her beau through social media four months earlier. He was an intelligence analyst in his second year of the Army stationed at Fort Hood, Texas. They were planning to marry soon at the Bell County courthouse in Killeen, Texas. Was she mature enough to get married? I’d miss that first moment gazing into my daughter’s eyes in her wedding dress, something I had dreamed of since the day she was born.

“Maybe you could move in together,” I suggested in as calm a demeanor as I could muster. “Maybe get to know each other a bit more.”

“We want to make a commitment and be together before he’s deployed,” Maggie calmly responded, sitting up straight with her hands in her lap.

I grew up in Connecticut — the land of steady habits. My wife and I followed custom. We dated for 10 years before we were married, bought a house, brought two children into the world, and started college funds. Maggie’s surprising marriage plan broke all the principles I had lived with my entire life.

They tied the knot four weeks later, the day after Valentine’s Day, at a civil ceremony we couldn’t attend because of the unpredictable schedule at the courthouse. They were hastily given an appointment late in the afternoon with the justice of the peace. Even then, they weren’t sure when they would get married because the justice of the peace — also the county coroner — was called away just before their vows. Two hours later, they stood in a quiet courtroom, about 1,800 miles away from our home, promising to love each other in a tranquil, yet joyous, ceremony. They sent us their wedding video, taken on a smartphone by my new son-in-law’s Army buddy, his best man and witness.

Two weeks later Maggie returned to Connecticut for a few of her things.

“We need a car in Texas, Dad. Would you drive down with me?” she asked. “We’ll make a vacation out of it.”

“Ship the car,” I said. “It’ll be cheaper to get it there by truck, figuring in gas, hotels, food and the flight back.”

In a few days, Maggie was off to Texas with her laptop, chargers, and some shorts and T-shirts. I parked at the end of the airport runway to watch her early-morning flight take off, still trying to process everything that was changing so quickly. It was dark in the early morning stillness and I felt my grasp on her disappear as quickly as the twinkling lights of her plane faded in the distance. The little girl I had once clutched so close as an infant — our only daughter and youngest child — was out of my reach, out in the world on her own, out of my protection zone.

“I’m in for the road trip,” I told my daughter on the phone the next day.

“There’s one condition,” I responded playfully. “I’d like to stop in Nashville for a few days. I’ve never been and think it’d be fun.”

Music was woven into the fabric of our family. I had been a DJ for a decade after college, and my daughter played three instruments. Visiting Nashville would become part of our musical DNA.

Maggie flew back to Connecticut in early April to help pack her car. We agreed to share driving duties, and be on the road no more than eight hours a day — in daylight. I ordered a TripTik from AAA, an old-school, 8 ½-by-5-inch spiral-bound booklet made up of 61 pages of paper maps, customized for our journey. According to the booklet, the trip would be four legs, 1,847.8 miles total, taking 27 hours and 52 minutes of travel time.

We left early morning, choosing the scenic route on a highway that ran alongside the Blue Ridge Parkway. Vast rolling green hills were dotted by black cows. The dogwoods planted alongside the road in Virginia and Tennessee were singing in full April splendor, their welcoming pink blooms tilting in the gentle breeze and pointing south toward our destination. And there were crosses, all sizes and colors, the Bible Belt’s symbol of continuing hope.

Two days later, we arrived in Nashville around supper time. Maggie spied a tattoo shop while we walked down Second Avenue.

“Dad, do you want to get matching tattoos?” she jokingly asked, as she had many times in the past. I was dismissive, never serious about getting inked, thinking only rowdy bikers got tattoos. But once we were immersed in the aura of Nashville, I realized how the two of us would be forever connected in our own way. We had to do this. It was the perfect moment.

The next day, after a couple of slices of pizza at Luigi’s City Pizza, I asked, “So, what kind of tattoos are we getting today?” 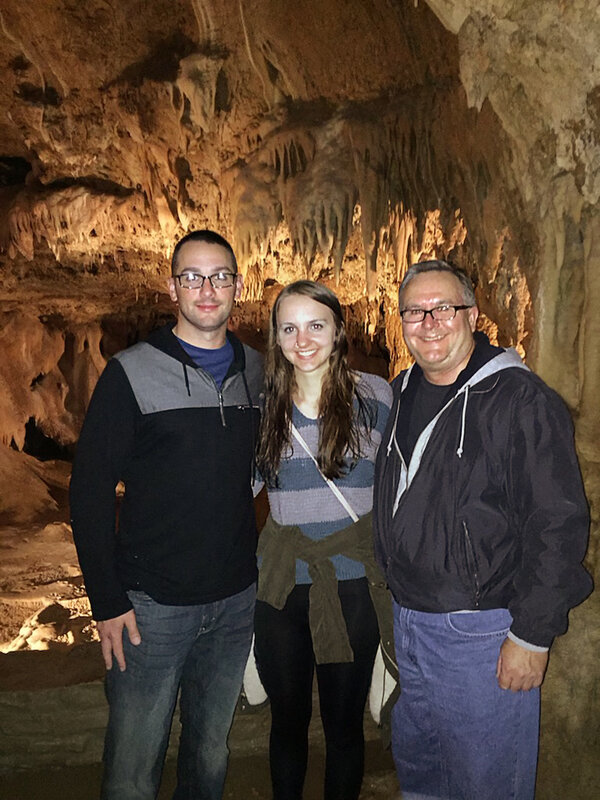 “What would we get?” Her eyes grew wide.

“OK, you pick the design and I’ll pick the placement. Same place on both of us.”

“Done,” I said, nervous yet excited.

Like a frenzied Whac-a-Mole arcade game player at the county fair, she began pounding out websites on her iPhone for designs and shops in the area. Within minutes, she had all shapes and styles of music notes to show me as well as a couple of tattoo shops within walking distance. I was impressed. Research and deliberation would have taken me at least a couple of weeks.

We settled on three music notes — one quarter note, one eighth and one sixteenth — in a triangular cluster. We agreed they’d be inked on the inside of our right arms, just above our elbows.

“Remember, Dad, I’ll scope out the shop to make sure it’s clean,” she told me. “If I’m not comfortable, I’ll give you the signal and we’ll book outta there. Take your cue from me.”

I followed Maggie into a small dimly lit shop, like a 5-year-old getting his first bike. The person at the front desk gave us forms to fill out and took our driver’s licenses. We headed to the back where the tattooist prepped our table.

He worked up the design on a tattered legal pad, its worn pages curled up in the corners, printed the design on transfer paper, cut the cluster of three notes apart, and attempted to place them on my daughter.

“I don’t want them cut apart,” she said. “I’d like them together so the placement is exactly the same on both of us.”

They started to argue about the placement on her arm. Her smile disappeared and she looked downward.

“We’re not getting tattoos today,” she said, standing up abruptly and heading for the door. Disappointed, I followed, scooping up our paperwork.

“I felt disrespected, and wanted no part of it,” she said outside. “And I’m thinking he was high.”

“I’m proud how you stood up for yourself,” I said.

Maggie had another shop lined up. We walked past a vintage Indian motorcycle in the small wood paneled foyer and up a flight of stairs. The studio was brightly lit with a line of client chairs and sparkling clean steel trays, each containing tattoo pens and needles.

Sizing our design on a gleaming iPad, our artist printed the pattern to be traced on our arms. My daughter sat first while the design was painstakingly laid out on her arm. Then it was my turn.

I squeezed my eyes shut and listened to the buzzing of the electric pen, feeling the tingle of the notes being etched in place.

I slipped two folded $20s in his hand as a tip as we walked out, each of us beaming in our newly inked bond.

On the last leg of our trip, we left Little Rock, Ark., to overcast skies and light rain. By afternoon, it was dark as midnight, matching the apprehension I felt about leaving my daughter. I wrestled with the steering wheel in the wind, trying to stay in our lane while quarter-size raindrops pelted us.

When we passed through Dallas with only two hours left until our destination, “Home to You” by Sigrid drifted from the Spotify playlist my son had created for our trip. Fluffy white clouds floated in a bright blue sky.

Arriving at Fort Hood, my daughter closed the last page of the TripTik we had followed every day. She ran breathlessly into her husband’s open arms. In the softness of the moment, I witnessed their love for each other.

During my five-day stay, my son-in-law was promoted to private first class. We were invited to the ceremony on base, the only civilians attending with 30 of his military peers. As he attained his third rank, I realized how serious he was in honoring his commitment to his fellow soldiers.

The night before I boarded my plane, Maggie and I sat in a convenience store parking lot, tears streaming down our cheeks.

Nor did I. We’d gotten to know each other as adults in a brand-new way. She’d be OK. I could say goodbye to my little girl who had turned into a confident young woman.

Life could be as unpredictable as transforming “ship the car” into an unexpected road trip, and as surprising as my daughter embracing paper maps. Sometimes I had to break tradition. I could be — and needed to be — more open-minded.

I gained more from our adventure than I would have in one hurried day at a wedding reception. Instead of a walk down the aisle with flowers gracing each pew, I drove my daughter down a scenic byway lined with pink dogwood blooms to her new husband, a man I could trust and admire. Instead of a wedding toast, I celebrated my son-in-law’s promotion. We never had a father-daughter dance, but our shared tattoos represented the synchronized beauty of our bond.

I hugged her at the airport, thanking her for the gift of knowing she’ll never be far away. She’ll always remain as close as the three small music notes I will forever carry with me.

Coronavirus horror: US on alert as animals infected by deadly virus at two different farms

Volkswagen Aims to Use Its Size to Head Off Tesla

Have Your Say: EU warns UK to ‘dial down’ on threat of Brexit talks walk-out – should we?