An event in rural Wisconsin was meant to show liberals that the agreement was sufficiently ambitious — while assuring moderates that the president remained committed to the deal. 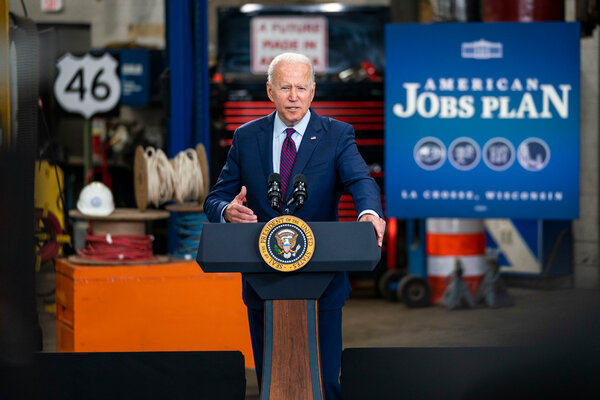 President Biden opened a combination road show and apology tour centered on his bipartisan infrastructure deal on Tuesday in La Crosse, Wis., as he sought to reassure Republicans that he was committed to the agreement he struck last week and convince liberal and centrist Democrats that the compromise had not dimmed his economic ambitions.

Mr. Biden praised the $579 billion bipartisan pact, promising it would bring faster internet, less traffic and safer drinking water to Americans in Wisconsin and across the country. In many cases, he promised the same or at least similar benefits that he predicted when rolling out his more ambitious $4 trillion plan earlier this year.

But in the same speech, the president also said he would continue to press the case for trillions of dollars in additional spending to reshape the economy, educate children and young adults, support workers and families, and fight climate change. And he reiterated his plans to pay for that spending by raising taxes on corporations and high earners. Such a plan would almost certainly need to be passed with only Democratic votes.

“There’s much more to do, and I’m going to continue to fight for you,” Mr. Biden said during a stop at a municipal transit facility. “I’m going to keep working with Congress to pass even more of my economic agenda so we can keep building an economy from the bottom up and middle out.”

Germany won't use antibody tests until ethics are debated

Bahrain king says accord with Israel not directed against any country