A lawyer for the Doobie Brothers is demanding that the actor Bill Murray pay up for using one of the group’s hits in a commercial for his William Murray line of golf clothing.

“We’d almost be OK with it if the shirts weren’t so damn ugly,” the lawyer, Peter T. Paterno, wrote in a letter sent to Mr. Murray on Wednesday.

Mr. Murray, who played a deranged golf-course groundskeeper in the 1980 comedy “Caddyshack” and is a regular participant in the annual pro-am tournament at the Pebble Beach Golf Links in California, started the business with his brothers in 2017.

On behalf of the Doobie Brothers, Mr. Paterno accused Mr. Murray of using the song “Listen to the Music,” an upbeat call for world peace that peaked at No. 11 on the Billboard chart in 1972, in an ad for a $50 polo called Zero Hucks Given.

The lawyer also said William Murray had used songs owned by other clients without permission. “It seems like the only person who uses our clients’ music without permission more than you do is Donald Trump,” Mr. Paterno wrote.

Like other William Murray offerings, the Zero Hucks Given shirt, named after Huckleberry Finn, revives the look of the loud golf clothing of the 1970s. Other items from the Murray brothers include Cracking Up Button Downs, Chicas ’N’ Floritas Water Hazard Shorts and the Nine Iron Dad Hat.

William Murray Golf did not immediately respond to a request for comment.

Mr. Paterno is a music industry veteran. His online biography for his Los Angeles firm, King, Holmes, Paterno & Soriano, notes that after he left a job writing software for NASA, he became the first president of Hollywood Records and signed the rock band Queen for $10 million.

In 2010, he took on the Tea Party politician Joe Walsh while representing the Eagles guitarist and solo performer Joe Walsh. Mr. Walsh the politician did not have permission to use a version of “Walk Away,” a song from Mr. Walsh the musician, during his ultimately successful campaign for a House seat, Mr. Paterno wrote in an arch letter.

In his letter to Mr. Murray, Mr. Paterno was no less sarcastic: “This is the part where I’m supposed to cite the United States Copyright Act, excoriate you for not complying with some subparagraph that I’m too lazy to look up and threaten you with eternal damnation for doing so. But you already earned that with those Garfield movies.”

Eriq Gardner of The Hollywood Reporter posted the lawyer’s letter on Twitter Thursday. 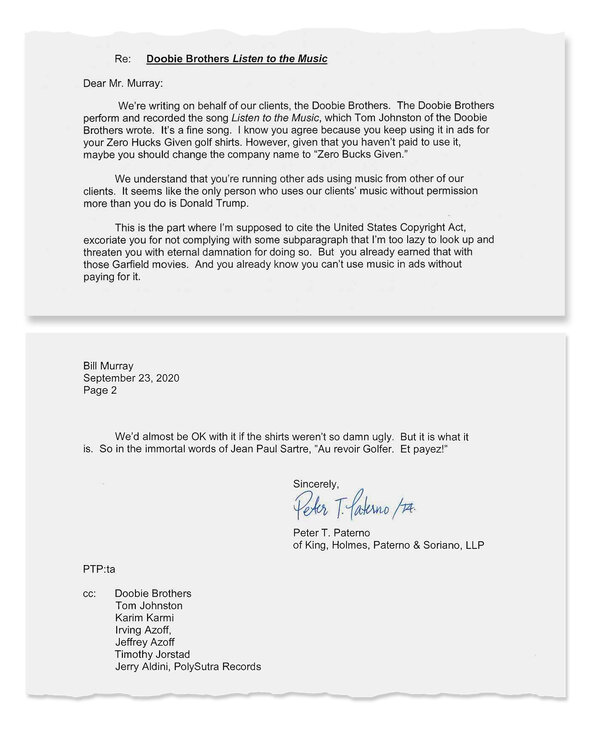 On the golf course, relations between Mr. Paterno and Mr. Murray have been more civil.

“He let a foursome I was in play through him once,” Mr. Paterno said in an email on Thursday. “While we teed off, he took a nap, resting his head on the tee marker. It was pretty funny.”

‘She’s wrong and she knows it!’ Matt Hancock hits out at SNP over fierce border grilling

BBC Weather: Gorgeous winter sun to shine but Britons should wrap up for chilly day