Bloomingdale’s believes its “Space Jam: A New Legacy” collaboration will be a slam dunk.

The pop-up highlights women’s and men’s fashion, beauty, home and kids. It will be open through Aug. 16 at Bloomingdale’s 59th Street flagship in New York and bloomingdales.com. Select Bloomingdale’s stores nationwide will also have It’s Game Time outposts with special curations. The 1,600-square-foot Carousel is on the main floor of the flagship and has its own entrance on 60th Street, between Lexington and Third Avenue.

“Space Jam: A New Legacy” will be released in theaters nationwide on July 16, and on HBO Max for 31 days from theatrical release in the U.S. LeBron James stars alongside Don Cheadle, Chris Davis, Zendaya, Sonequa Martin-Green, Cedric Joe, Jeff Bergman and Eric Bauza in the movie, which is directed by Malcolm D. Lee.

“The Carousel @ Bloomingdale’s is all about bringing exciting cultural moments to our customers, and what could be more exciting than the release of the new ‘Space Jam: A New Legacy’ film,” said Frank Berman, executive vice president and chief marketing officer, Bloomingdale’s. “It’s Game Time translates the spirit of the film into a fun shopping destination that blends fashion, sports and even art, and comes to life through special products, outdoor activations and engaging window displays.”

Asked how Bloomingdale’s decides which movies are a good fit, Berman said the retailer has really good relations with several movie studios and entertainment properties, and this movie came to his attention two and a half years ago. “We evaluate what we think makes the most sense for our brand and what our customers will be excited by. I think that’s why we chose ‘Space Jam; A New Legacy.’ It’s one of the most anticipated films of the summer. It has a legacy of its own. I love when they bring these things back in a different iteration that’s modernized,” he said.

“The fact that it’s with LeBron James and this interesting cast of characters and of course, I’m a huge Looney Tunes fan. It’s just fun, and this is a good time to introduce it, especially in the summer where we’re hopefully coming out of COVID-19, and more vaccinations are happening, and people are feeling more comfortable about coming back into store locations. We’ve seen a sizable uptick in customers return to shopping in our stores. It’s ahead of where we anticipated. This couldn’t come at a better time,” he continued.

The flagship’s Lexington Avenue windows, which will be unveiled June 21, will highlight one-of-a-kind pieces by filmmaker and contemporary artist Thierry Guetta, under his moniker, Mr. Brainwash. These pieces were created especially for The Carousel, including life-sized sculptures of “Space Jam: A New Legacy” stars LeBron James and Bugs Bunny, and are available for purchase. Visitors to the Carousel can also purchase limited-edition Mr. Brainwash art prints ($1,500 to $1,700) and fine art, including an oil panting of LeBron James (price available on request). 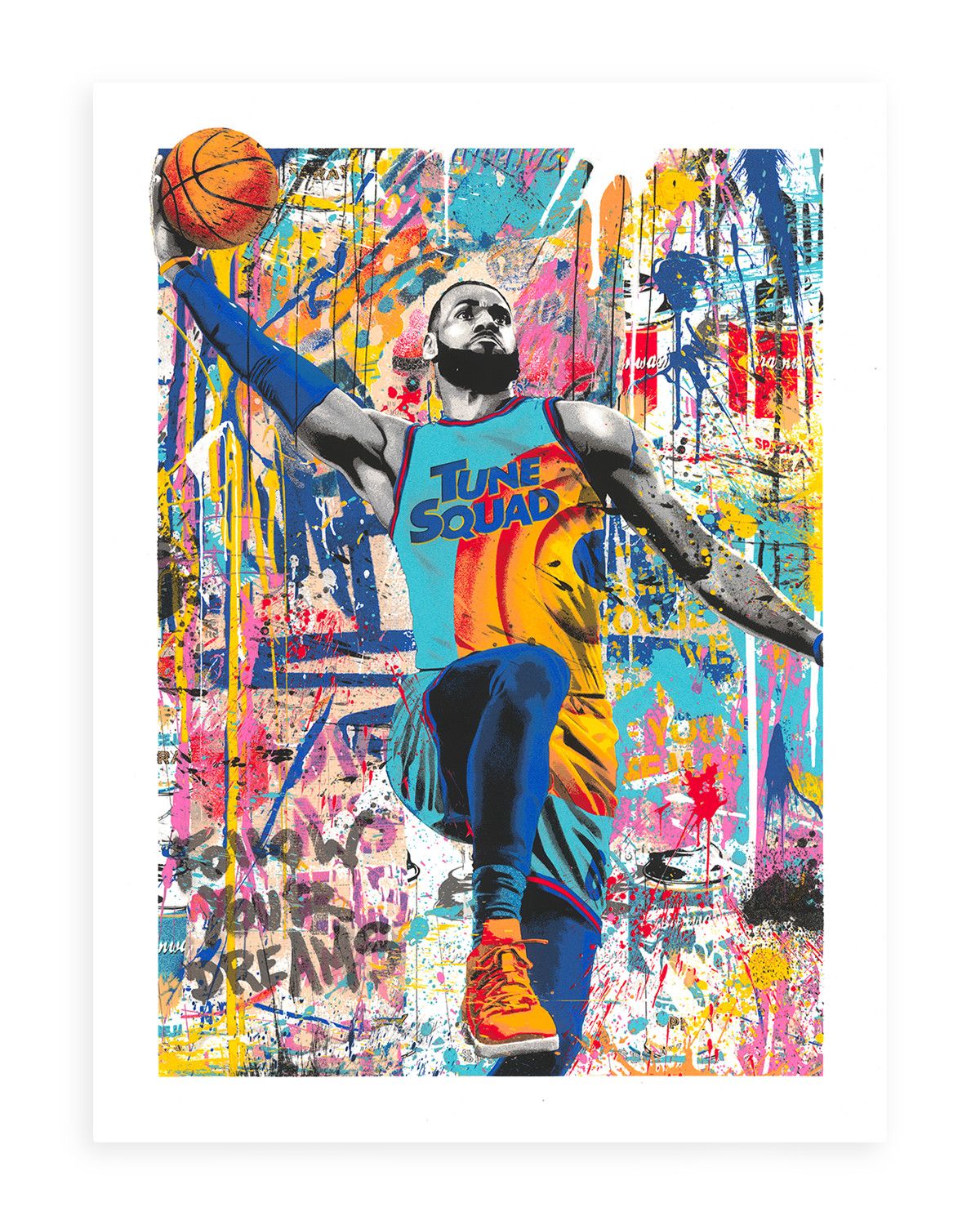 Created in partnership with Bleacher Report and exclusively for The Carousel is a capsule collection of T-shirts and hoodies that mix NBA team logos with Looney Tunes characters. Other special collaborations include Local Hoops, Eleven Paris, Vilebrequin, and Beverly Hills Club, which offer streetwear-inspired apparel and swimwear featuring Looney Tunes designs, in addition to Danielle Nicole handbags such as Lola Bunny backpacks and a Tweety Baskeball crossbody.

Prices in the Carousel range from $6 for treats from The Hamptons Popcorn Co. and Tony’s Chocolonely to $1,700 for a Mr. Brainwash fine art print.

Berman feels the collections will be equally as attractive to adults as to kids. “I think they’re going to like this animated merchandise. It’s the juxtaposition of the Looney Tunes characters. It’s more like special streetwear,” he said.  “It’s like really cool stuff. I think that a fashion-forward customer will enjoy it and the moment of pop culture. It’s making the shopping experience entertaining,” he said. 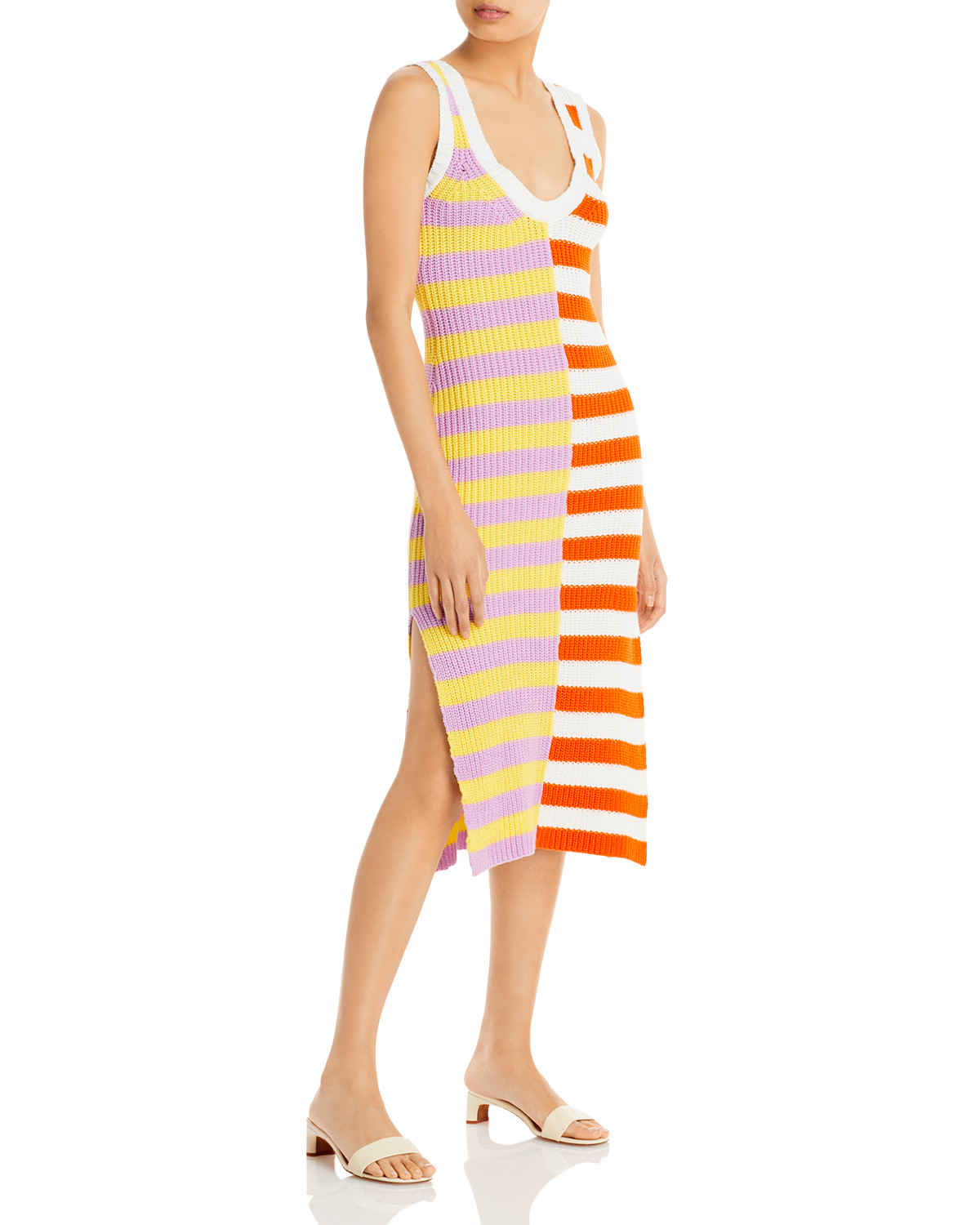 A look from Staud in the It’s Game Time pop-up at Bloomingdale’s. courtesy shot. 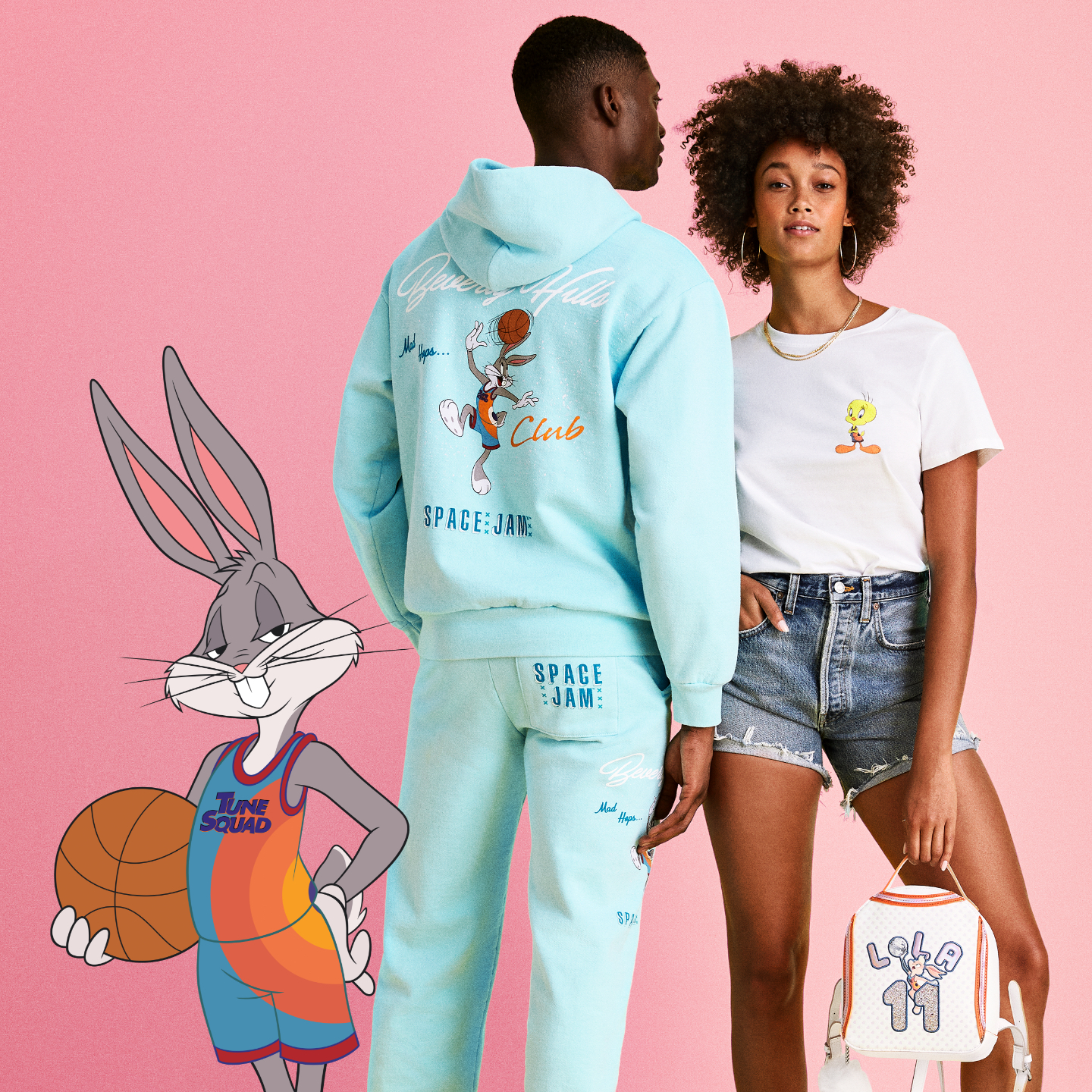 Some looks from the It’s Game Time pop-up at Bloomingdale’s. courtesy shot.

Asked what he anticipates will be the bestsellers, Berman said, “I’m not the buyer, but personally I like the mash-ups between the NBA and the Looney Tunes characters. I just think they’re really unique and they will attract a lot of attention. I think some of the kids’ things will resonate with our customer.”

In the outdoor fun and entertaining area, there are inflatable Fatboy lounge chairs, an Ooni pizza oven and Pablo UMA sound lantern speakers. The shop also houses games like Badminton sets and an inflatable basketball hoop from Sunnylife.

“Our focus for ‘Space Jam: A New Legacy’ was to build upon the cultural impact of the original Space Jam movie and celebrate the beloved Looney Tunes characters in a unique way. We collaborated with Bloomingdale’s to create an innovative retail entertainment experience, and ‘It’s Game Time’ delivers on all fronts. The intersection of storytelling, artistic expression, and luxury products inspired by one of the most anticipated films of the year makes this truly an exciting moment to share with our fans,” said Samantha Bushy, senior vice president of North America and head of e-commerce, Warner Bros. Consumer Products.

Bloomingdale’s will celebrate the opening of the It’s Game Time Carousel with an outdoor activation at the 59th Street flagship. On June 11 and 12 from 12 p.m. to 6 p.m., shoppers will have the chance to participate in a special Bleacher Report game where they can shoot hoops for a chance to win a Bloomingdale’s gift card of a complimentary scoop of Mikey’s Ice Cream with each attempt. 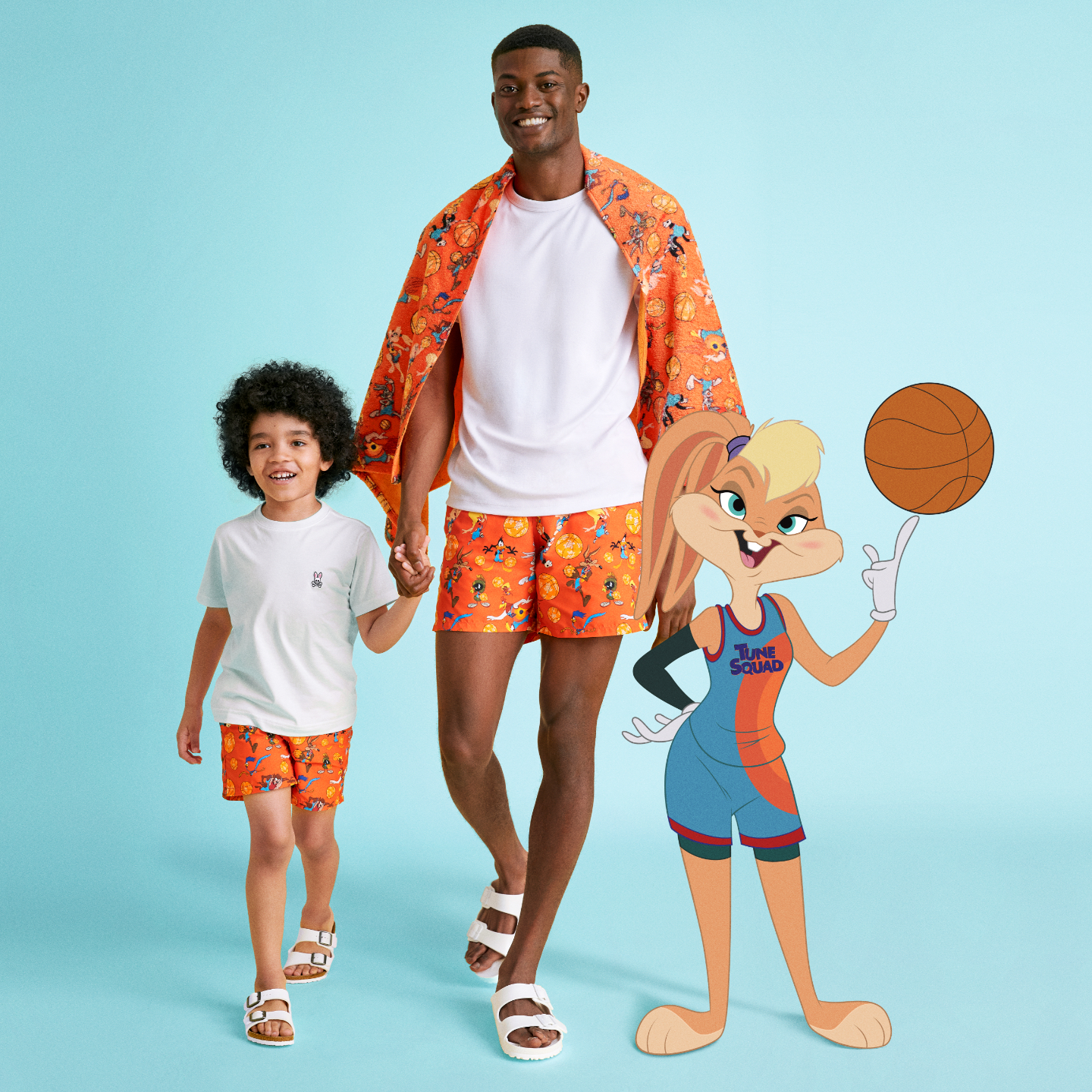 “Space Jam: A New Legacy” Merch Blitz Will Include 200 Brands, From Nike to Tommy