The police in the Chinese region of Xinjiang are still buying hundreds of thousands of dollars’ worth of American DNA equipment despite warnings from the U.S. government that the sale of such technologies could be used to enable human rights abuses in the region.

The U.S. government has tried to prevent the sale of DNA sequencers, test kits and other products made by American firms to the police in Xinjiang for years, amid concerns raised by scientists and human rights groups that the authorities could use the tools to build systems to track people. In 2019, the Trump administration banned the sale of American goods to most law enforcement agencies in Xinjiang unless the companies received a license. And in 2020, Washington warned that companies selling biometric technology and other products to Xinjiang should be aware of the “reputational, economic and legal risks.”

But Chinese government procurement documents and contracts reviewed by The New York Times show that goods made by two American companies — Thermo Fisher and Promega — have continued to flow to the region, where a million or more residents, mostly Muslim Uyghurs, have been incarcerated in internment camps. The sales are happening through Chinese firms that buy the products and resell them to the police in Xinjiang.

It is not clear how the Chinese firms acquired the equipment, and the documents do not show that either American company made direct sales to any of the Chinese firms. Still, experts say the fact that the Xinjiang police continue to acquire and use U.S.-made DNA equipment raises questions about the companies’ diligence regarding where their products end up.

In a statement, Thermo Fisher said it has a “multi-level purchasing process” designed to prevent sales and shipments of human identification products to the Xinjiang authorities. The statement said it uses a network of authorized distributors who have agreed to comply with that process. Thermo Fisher said the distributors and the users on the documents reviewed by the Times are not listed in its system.

Promega did not respond to queries on what procedures they have in place to ensure their products do not end up with the Xinjiang police.

In 2019, Thermo Fisher announced it would stop selling to Xinjiang after undertaking “fact-specific assessments.” At that time, the company had come under scrutiny after reports that Chinese officials were collecting DNA samples and other biometric data from millions of Uyghurs, many of whom said they had no choice but to comply.

The deals highlight how difficult it is for Washington to control the ways in which American technology is exploited by authoritarian governments that may use it for repression and surveillance. The issue, which affects a variety of high-tech industries, has become increasingly tense as relations between Washington and Beijing have grown frostier over human rights and other concerns.

It is unclear how the products are being used by the Xinjiang police. In the United States, law enforcement has used similar technology to solve crimes, though some states have moved to restrict those practices. 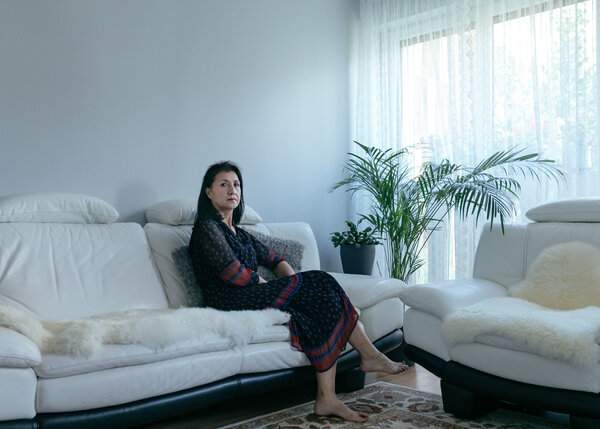 DNA sequencers can be used to advance Covid-19 and cancer research and to exonerate prisoners. But they can also be abused by the police for surveillance, human rights activists say. Gulbahar Hatiwaji, a Uyghur who was detained in Xinjiang from 2017 to 2019, said her blood was collected about five to six times while she was in detention.

Ms. Hatiwaji said the police had also scanned her face and irises and recorded her voice. In another instance, she said, health workers worked from morning until night to prick the fingers of the 250 detainees who were locked up in a camp in Karamay, a city in northern Xinjiang. No one told them what it was for.

“We had no right to ask,” said Ms. Hatiwaji, 54, who is now living in exile in France. “Whatever they asked us to do, we had to obey.”

In February 2019, Thermo Fisher, based in Waltham, Mass., said it would stop selling its products to Xinjiang, a decision it said was consistent with the company’s “ethics code.” But 10 Chinese contracts and government procurement documents reviewed by The Times show that Thermo Fisher products continue to end up in the region.

Businesses operating in a country as big as China can sometimes struggle to untangle their supply chains, and trying to find out whether their third-party suppliers are selling to other companies can be tricky. Legal experts say companies selling in China need to closely assess potential third-party deals, especially given the risks in Xinjiang.

Senator Marco Rubio, who has frequently criticized American companies for doing business with the police in Xinjiang, said that “no U.S.-based company should be selling surveillance equipment or other technologies to security forces anywhere in China, especially Xinjiang.”

“The Biden administration must use all tools at their disposal, including licensing requirements and export controls, to put an end to the complicity of U.S.-based companies with these crimes against humanity,” Senator Rubio said in a statement to The Times.

The government procurement documents and contracts show that several Chinese companies sold Thermo Fisher equipment worth at least $521,165 to eight public security agencies in Xinjiang from May 2019 to June 2021. As recently as Sunday, a Chinese firm based in Urumqi, Xinjiang’s capital, sold $40,563 worth of Thermo Fisher’s products to the police in Korla, the second-largest city in Xinjiang.

The police in Xinjiang have also signed four agreements with Chinese companies selling DNA equipment from Promega, a biotechnology company based in Madison, Wis., with deals all the way through last month. Most of the deals, which include products from other companies, do not make clear the value of the Promega products.

Daniel Ghoca, Promega’s general counsel, said the company does not conduct business in Xinjiang and has no customers or distributors there. “The company takes seriously its obligation to comply with all applicable U.S. government export controls and sanctions requirements,” Mr. Ghoca wrote in an email. “The company has in place robust procedures and controls that ensure its compliance with such requirements.”

Yves Moreau, an outspoken critic of American DNA companies selling to Xinjiang, and a professor of engineering at the Catholic University of Leuven in Belgium, said he was “absolutely stunned” when he found several of the contracts himself last month on Chinese corporate bidding websites.

“I mean, some professor who doesn’t speak Chinese sits on Google in the evening and finds that stuff,” Professor Moreau said. “What is the process that they have put in place to avoid things like that from happening? They should have caught this much earlier than me.”

The contracts show that all but one of the Chinese firms involved in the transactions are based in Xinjiang, where the authorities continue to place orders to build new DNA databases.

Surya Deva, an associate law professor at the City University of Hong Kong, and a member of the U.N. Working Group on Business and Human Rights, said the companies could not evade responsibility even if their products were being provided by third-party suppliers. One way to be more vigilant, he suggested, would be to insert a clause in contracts to make it clear that the products cannot be sold to the police in Xinjiang.

Human rights activists say that U.S. law on the issue is out of date, and that the last time lawmakers tried to prevent American companies from selling similar products to China was 1990. At that time, sanctions prohibited American companies from selling fingerprinting devices, weapons and ammunition to the Chinese police in the wake of Beijing’s deadly crackdown on pro-democracy protesters near Tiananmen Square.

The rights groups say those sanctions should be updated to include cutting-edge technologies such as surveillance products, facial recognition machines and DNA equipment.

Ireland to ban gatherings of more than 5,000 until end of August