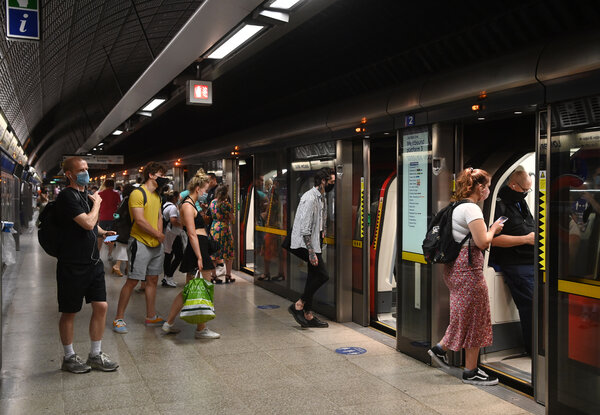 After 16 long months, the British government lifted nearly all of its pandemic restrictions across England on Monday including its guidance to work from home.

But as the so-called Freedom Day arrived, the nation is reporting nearly 50,000 new coronavirus cases a day in a population that is about two-thirds fully vaccinated. And now, a “pingdemic,” in which hundreds of thousands of people are being pinged by the National Health Service’s track-and-trace app and told to self-isolate because they were near someone who tested positive, is causing staff shortages in all industries.

Rather than a stampede of workers returning to their offices, many large companies are approaching the reopening cautiously as the government says there needs to be “personal and corporate responsibility” over some measures. By 10 a.m. on Monday, travel on the London Underground was 38 percent of normal demand, no higher than the same period last week, and the vast majority of people were still wearing masks.

And so, most employers are keeping a return to the office as voluntary, requiring mask-wearing away from desks and limiting their office capacity to prevent crowding. For example, the Bank of England is asking staff to return only once a week starting in September. But there was some loosening of policies on Monday inside the central bank — restrictions on the use of elevators were eased and spaces between desks will be removed.

At JPMorgan Chase’s offices in London, usually home for 12,000 employees, masks still need to worn in communal spaces and meeting rooms, social distancing indicators are still marked around the buildings, and capacity remains capped at 50 percent. The biggest change on Monday is that employees from any team are allowed to return to their office if they wish, which has slightly increased occupancy from about 30 percent recently, but is still far below capacity. Over the summer, the bank intends to gradually raise the limit.

In the City of London, the capital’s main financial district, the health and safety measures in Goldman Sachs’s 826,000-square-foot European headquarters are staying the same. That means workers must wear a mask when not sitting at their desk and continue to take part in the on-site testing program. Social distancing will reduce the office’s normal capacity. Recently, on average, about 30 percent to 40 percent of the bank’s 6,5000 employees have been in the office.

Goldman Sachs is also monitoring vaccination rates from voluntary surveys of its staff, which has shown a “significant upward trajectory” since June, according to an internal memo.

“We will continue to monitor local case rates and public health safety guidance, and will update our in-office protocols as and when appropriate,” the memo, sent by Richard Gnodde, the chief executive officer of Goldman Sachs International.

At London office of McKinsey & Company, masks will be required only in busy areas beginning Monday, the one-way system around the building will be abandoned, there won’t be limits on how many people can use a meeting room, and staff won’t have to get their temperature checked when entering the building. But there is still no requirement to return to the office.

Even Prime Minister Boris Johnson will be working from home on Freedom Day as he too has been pinged by the National Health Service to self-isolate for 10 days.

Rich nations will pay a price if poor nations are shut out of vaccines.