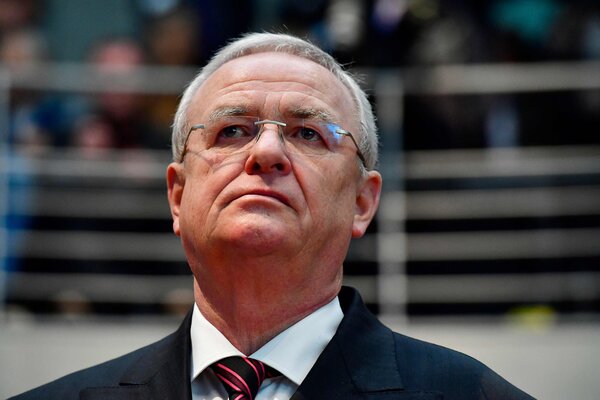 Volkswagen said on Wednesday that its former chief executive, Martin Winterkorn, would pay the company 11.2 million euros (about $13.7 million) for “breaches of due diligence” that led to the company’s emissions cheating scandal as part of a settlement with other former executives totaling €288 million.

The announcement came the same day that prosecutors in Berlin charged Mr. Winterkorn with lying to the German parliament about his knowledge of the carmaker’s emissions scandal, raising fresh questions about his role in a cover-up.

Mr. Winterkorn was once one of Germany’s most powerful men, but what he knew about of the emissions cheating has remained a crucial question for Volkswagen, even though he resigned in 2015, when the scandal first broke. Overall, the scandal has cost Volkswagen tens of billions of euros in fines, settlements and legal fees.

Prosecutors in Berlin said Wednesday that Mr. Winterkorn knew far earlier than he had acknowledged to a parliamentary panel in 2017 that the company had secretly equipped millions of diesel-powered VW cars with special software, known as a defeat device, to cheat on emissions tests. The gimmick made the vehicles appear environmentally friendly and attractive to ecologically conscious consumers.

“In his testimony, the accused falsely claimed to have been informed of the defeat devices only in September 2015,” Berlin prosecutors said in a statement.

“According to the indictment, he had since May 2015 been aware that the engine control software of some VW vehicles had been equipped with a function to manipulate the exhaust values in testing,” prosecutors added.

The latest legal salvo against Mr. Winterkorn came as Volkswagen announced on Wednesday that it was facing fresh charges from French authorities for cheating on emissions tests.

Volkswagen’s decision to seek settlements from former executives is a turnaround for the company, which had previously been reluctant to publicly accuse former top managers of complicity in the emissions fraud.

In addition to Mr. Winterkorn, Rupert Stadler, the former chief executive of the Audi luxury car division, has agreed to pay €4.1 million. Most of the rest of the payments will be made by insurance companies providing directors’ and officers’ coverage. The settlement must be approved at the annual shareholders’ meeting next month.

Mr. Winterkorn, who still faces criminal charges in Braunschweig, a town near VW’s headquarters in Wolfsburg, on accusations of fraud related to the case, has long contended that he was not aware of any wrongdoing.

In early 2017, Volkswagen pleaded guilty in the United States to criminal charges that included conspiracy to defraud the government, violations of the Clean Air Act and obstruction of justice. The company paid $20 billion to resolve civil and criminal charges related to the scandal.

Ravaged and Resilient, the Show Goes On