The United Arab Emirates issued the first government approval of a Chinese coronavirus vaccine on Wednesday, citing preliminary data showing that it was 86 percent effective, a move that could bring Chinese vaccines a step closer to widespread use.

The announcement by the Emirates’ Ministry of Health and Prevention was the first official indicator of a Chinese vaccine’s potential to help stop the pandemic. If results from elsewhere show similar findings, the Chinese vaccines could offer a lifeline to developing countries that cannot afford vaccines from the United States that are likely to be more expensive and more difficult to transport.

But Chinese officials and Sinopharm, the state-owned maker of the vaccine, were silent on Wednesday on the Emirati disclosures. And scientists noted that the announcement was lacking in data and other critical details.

The news that a Chinese vaccine is 86 percent effective — exceeding the 50 percent threshold set by many governments — comes as a boost to China’s biomedical ambitions. But it falls short of the performance reported by the American drug makers Pfizer and Moderna, which said earlier that their vaccines were more than 90 percent effective at protecting against the coronavirus.

The Emirates, which is among 10 countries where Sinopharm is testing its two vaccines, said it had reviewed an interim analysis of data from late-stage clinical trials by Sinopharm that also showed the vaccine was 100 percent effective in preventing moderate and severe cases of the disease. There were no serious safety concerns, it said.

“The announcement is a significant vote of confidence by the U.A.E.’s health authorities in the safety and efficacy of this vaccine,” the ministry said in a release carried by the state-run Emirates News Agency. The government did not say whether it had conducted an independent analysis of the raw data.

The data from the Emirates bodes well for Sinopharm’s vaccines to obtain full regulatory approval in China, which Sinopharm sought even before the completion of final trials. The company is also conducting trials in Bahrain, Jordan, Peru, Argentina and elsewhere.

“I think it could hit the market in China very soon and there will be news within the next one to two weeks,” said Tao Lina, a vaccine expert in China and a former immunologist at the Shanghai Center for Disease Control and Prevention.

The vaccine could also help bring China closer to fulfilling a pledge by China’s top leader, Xi Jinping, to make the vaccine a “global public good.”

But even as the announcement by the Emirates raised hopes about the promise of Chinese vaccines, it also pointed to a frustrating lack of clarity that has dogged China’s coronavirus vaccine development for months.

Sinopharm would not confirm or comment on the Emirates news even hours after it came out. A spokeswoman for the company hung up the phone when reached and did not respond to messages and calls afterward. 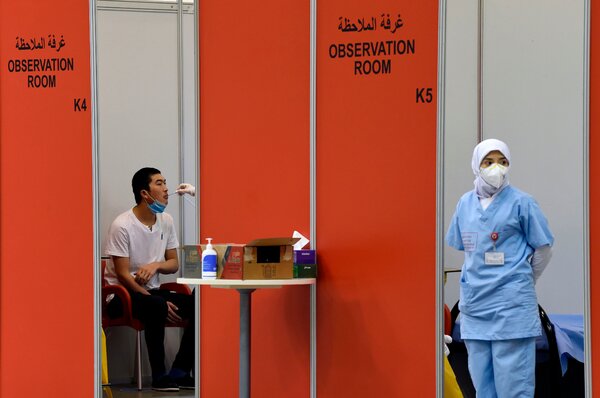 The news release from the Emirati government provided few other key details, such as the number of Covid-19 cases that were analyzed or the ages of the volunteers, making it unclear to scientists how Sinopharm came to its conclusions.

“The devil is in the details,” said Beate Kampmann, director of the Vaccine Center at the London School of Hygiene and Tropical Medicine. “It’s very difficult to judge this without seeing the number of cases. The main thing is, the trial results need to be made public.”

Jin Dongyan, a virologist at the University of Hong Kong, called the information in the Emirates’ disclosure “mediocre,” saying more transparency from the vaccine maker was needed.

“If they make everything secretly, like a black box, that does not help,” Professor Jin said. “That would just create confusion and mistrust and could be counterproductive.”

The need for clarity on the safety and efficacy of China’s vaccines has taken on more urgency after Sinopharm revealed it had already vaccinated roughly a million people even before the completion of clinical trials. The campaign has alarmed overseas scientists who say it exposes people to undue risks.

Chinese officials have repeatedly assured the public that the country’s coronavirus vaccines are safe, while providing few details. Last month, Liu Jingzhen, the chairman of Sinopharm, said that no one among the people who had received the company’s vaccines had experienced any adverse reactions. He said that “only a few had mild symptoms.”

The Road to a Coronavirus Vaccine

Words to Know About Vaccines

Confused by the all technical terms used to describe how vaccines work and are investigated? Let us help:

HSBC to hire 3,000 wealth planners in China amid rising tension