Grant McCartney has continually set himself goals and achieved them throughout an athletic career which has spanned collegiate rugby, pro skateboarding, and no fewer than six appearances on American Ninja Warrior. For his most recent challenge, McCartney went to the extreme, teaming up with Ten Thousand for their Feats of Strength series and subjecting himself to an “Alaskan ice bath” and fully submerged, freezing cold underwater swim.

Usually in cold immersion, athletes will submerge themselves in the freezing cold water up to their neckline; this alone drains the body of its heart four times faster than exposure to cold air, and has a drastic impact on heart rate and blood pressure. McCartney, however, decided he wanted to fully submerge his head under the water, which creates additional risk of hypothermia and drowning, even for the most experienced swimmer.

“I have this desire to be comfortable in the uncomfortable,” he said. “I’ve learned to be able to rest in pain, and I’ve realized—in the worst emotional moments of my life—that this is how we survive. We relax, reset, figure out what’s going on, and figure out how to push on.”

McCartney prepared for the challenge by taking daily ice baths for a month leading up to the event, spending more and more time in the ice each day to build up his body’s tolerance for the cold as much as possible. He also spent even more time than usual on his CrossFit workouts, focusing on exercises which he believed would be useful while underwater.

“I already felt pretty confident that I could handle the mental strength it takes to get in this water,” he said, “but hearing the risks, I realized that the main element that could go wrong is if physically something happens to me because I was unprepared.” One of the major side effects that McCartney knew would be a problem was the ice headache; he was eventually able to source a neoprene swimming cap which helped immensely.

McCartney undertook his attempt in Northern Alaska, plunging through a 3-feet-thick hole in the ice into 30-degree Fahrenheit water (that’s colder than -1 Celsius) and swimming away. He instantly realized that visibility under the ice was an issue he hadn’t anticipated; he couldn’t see a thing. 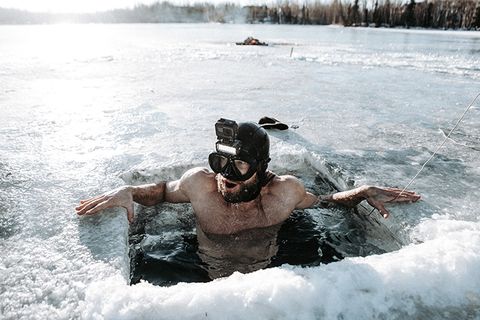 “I go out there ready to live my dream, and immediately, I’m in my nightmare,” he said. “I had no idea where I was, didn’t know how to get back out, and I didn’t even know which way was up and which way was down at that point.”

After around 10 seconds, he was able to spot the red markers which had been placed under the ice to help guide him, and he carried on with the swim, ultimately completing two 30-meter lengths and spending 1 minute 30 seconds under the ice.