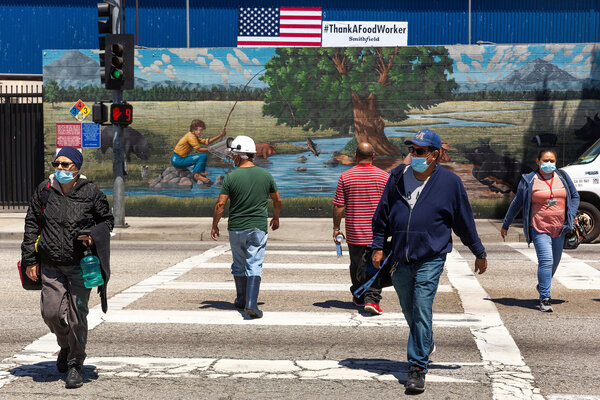 Scientists are urging the Centers for Disease Control and Prevention to swiftly set standards to limit the airborne transmission of the coronavirus in high-risk settings like meatpacking plants and prisons.

The push comes nearly a year after research showed that the virus can be spread through tiny droplets called aerosols that linger indoors in stagnant air and can be inhaled.

Action on air standards is even more urgently needed now because vaccination efforts are off to a slow start, more contagious virus variants are circulating in the United States, and the rate of Covid-19 infections and deaths remains high despite a recent drop in new cases, the scientists said in a letter to Biden administration officials.

The C.D.C. issued new guidelines on Friday for reopening schools, but the guidelines made only a passing mention of improved ventilation as a precaution against viral spread. The World Health Organization was slow to acknowledge that the virus can linger in the air in crowded indoor spaces, accepting that conclusion only in July after 239 experts publicly called on the organization to do so.

The 13 experts who wrote the letter — including several who advised Mr. Biden during the transition — urged the administration to blunt the risks in a variety of workplaces by requiring a combination of mask-wearing and environmental measures, including better ventilation. They want the C.D.C. to recommend the use of high-quality masks like N95 respirators to protect workers who are at high risk of infection, many of whom are people of color, the segment of the population that has been hit hardest by the epidemic in the United States.

At present, health care workers mostly rely on surgical masks, which are not as effective against aerosol transmission of the virus as N95 masks are.

Mr. Biden has directed the Occupational Safety and Health Administration, which sets workplace requirements, to issue emergency temporary standards for Covid-19, including those regarding ventilation and masks, by March 15.

But OSHA will only impose standards that are supported by guidance from the C.D.C., said David Michaels, an epidemiologist at George Washington University and one of the signatories.

(Dr. Michaels led OSHA during the Obama administration; the agency has not had a permanent leader since his departure.)

“Until the C.D.C. makes some changes, OSHA will have difficulty changing the recommendations it puts up, because there’s an understanding the government has to be consistent,” Dr. Michaels said. “And C.D.C. has always been seen as the lead agency for infectious disease.”