The veteran broadcaster is a strong opponent of the push from Scotland’s First Minister for the country to be split from the rest of the UK. He has consistently taken to Twitter to make his point on this clear and has often highlighted a number of facts that he claims would see Scotland a lot worse off as an independent country. Now Mr Neil has hit back again in an exchange with Ms Sturgeon’s Europe Secretary Mike Russell, pointing towards Scotland’s huge deficit as a major barrier for pushing for independence and possibly re-joining the European Union at a later stage.

Last month, the veteran broadcaster highlighted how Scotland’s public spending budget deficit has increased by £2billion from a year earlier from £13billion in 2018/19 to £15billion in 2019/20.

In a long-running Twitter exchange with Mr Russell, he replied: “No ranting old sport. Just dealing in facts.

“Next you’ll be telling me Scotland doesn’t run a fiscal deficit.”

The latest spat had come after Mr Neil reacted to comments from a Times columnist about a story the newspaper in Scotland had published. 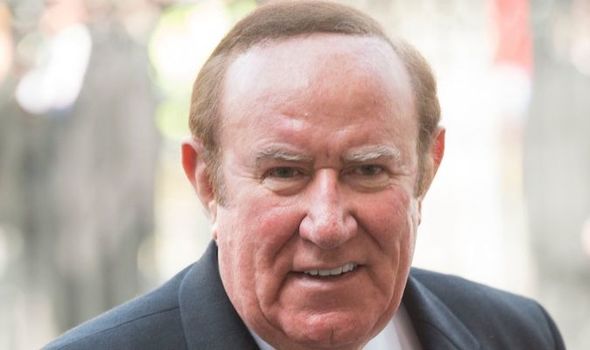 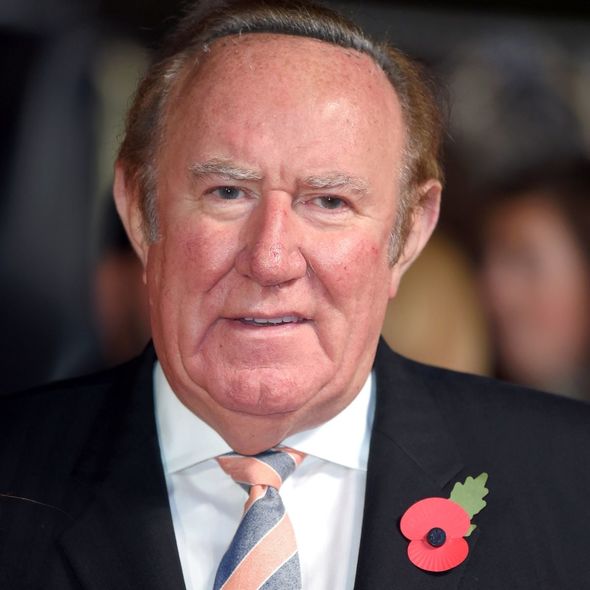 It covered actor Alan Cuming lashing out at the “insidious and subliminal racism” faced by Scots working in London, drawing a distinction between the warm reception he received in America with his experiences in the West End.

“Two, in my experience American audiences are far warmer to EVERYBODY than London ones.”

Mr Neil agreed with both points, and reacted by describing the accusation there is anti-Scottish racism in London as “nonsense”, adding it was a “fiction designed purely to promote a particular nationalist grievance narrative”. 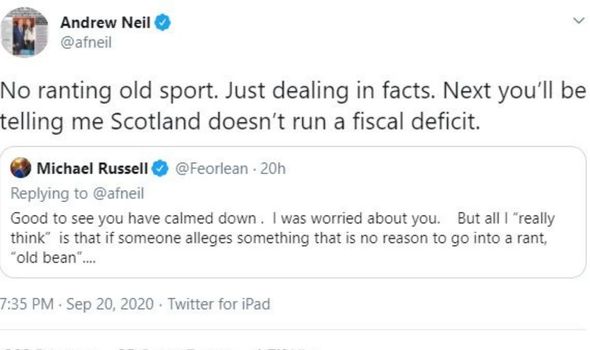 Mr Russell then got involved in the debate, and in response to Mr Neil, tweeted: “Interesting that an opinion – no more than that – from a highly successful performer (worthy of rational debate as @daaronovitch indicates with his post) is now judged to be a ‘fiction’ actively designed to ‘promote a nationalist grievance narrative’. That escalated fast.”

But Mr Neil hit back: “What’s more interesting is your failure to answer a simple question: do Scots face racism in London?”

He tweeted: “I am not the one either giving the opinion or rejecting it. 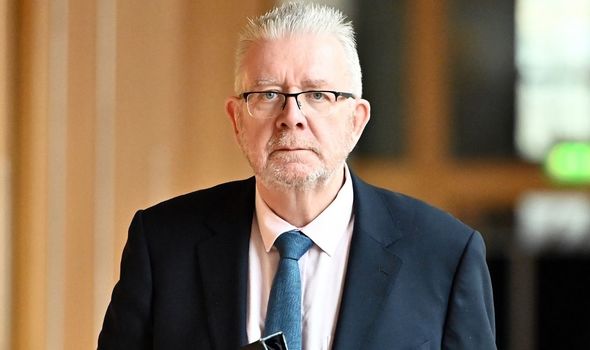 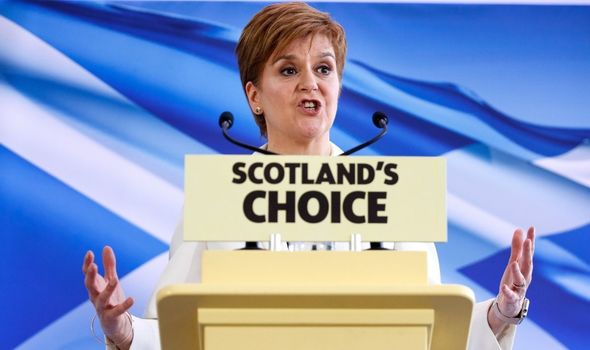 “Someone, arguing from their own experience has asserted it and others are, again using their experience, disagreeing.

“All reasonable things to do. But your reaction alleges organised conspiracy.

Mr Neil described that reply as “dissembling nonsense” to which the senior SNP politician sarcastically replied: “You seem abnormally angry at the expression of a point of view. Are you sure all this twittering is good for you?”

The veteran broadcaster calmly hit back: “Not in the least angry, old bean. But amused to see you nonchalantly stoking an imagined grievance while affecting studied disinterest.

“If you really thought London a hotbed of anti-Scottish racism you’d be shouting it from the hilltops. Transparently disingenuous.”

But continuing the spat, Mr Russell replied: “Good to see you have calmed down. I was worried about you.

“But all I “really think” is that if someone alleges something that is no reason to go into a rant, “old bean”.”

This led Mr Neil to brilliantly shut down the argument from the SNP and Ms Sturgeon for Scottish independence, mocking the fact Scotland has a huge deficit hanging over the country at the moment.

In pictures: Protest clashes in Minneapolis

A garden leads to a magical friendship.