The UK and India have agreed to make it easier to return illegal immigrants to each other’s countries – while a new immigration route between the two countries will be opened up for under-30s.

As part of a series of deals signed this week – hailed as a “quantum leap” in the UK-India relationship – the Home Office has announced a new mobility and migration agreement.

Building upon the government’s post-Brexit immigration regime, a new “bespoke route” for young professionals from India and the UK will allow 18-30-year-olds to work and live in the other country for up to 24 months. This will be limited to 3,000 people per year.

The programme will work in a similar way to the current Youth Mobility Schemes offered to young people from Australia, Canada, Hong Kong, Japan, New Zealand and South Korea. 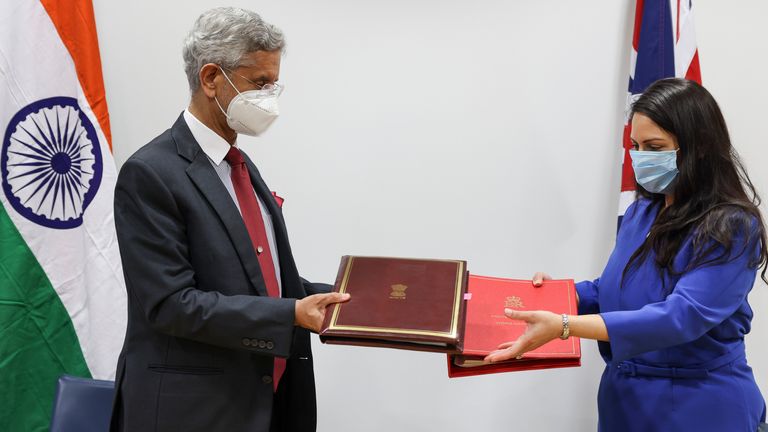 Under such schemes, applicants must have £2,530 in savings and be able to demonstrate they can support themselves in the UK.

Meanwhile, the deal will “enhance and accelerate the processes to return Indian nationals with no legal right to stay in the UK and vice versa”.

Home Secretary Priti Patel said: “This landmark agreement with our close partners in the Government of India will provide new opportunities to thousands of young people in the UK and India seeking to live, work and experience each other’s cultures.

“This agreement will also ensure that the British government can remove those with no right to be in UK more easily and crackdown on those abusing our system.”

The announcement of the immigration deal came as Prime Minister Boris Johnson and his Indian counterpart, Narendra Modi, held a virtual meeting.

The pair agreed a “2030 roadmap” including commitments to deepen cooperation on health, climate, trade, education, science and technology, and defence.

India has elevated the status of its relationship with the UK to a “Comprehensive Strategic Partnership” – the first European country to be granted that status.

The prime minister and Mr Modi’s meeting was held virtually after Mr Johnson cancelled a planned visit to India, due to take place last week, amid the worsening COVID crisis in the country.

Mr Johnson said: “The UK and India share many fundamental values. The UK is one of the oldest democracies, and India is the world’s largest.

“We are both committed members of the Commonwealth. And there is a living bridge uniting the people of our countries.

“In the last week the British people have stepped up in their thousands to support our Indian friends during this terrible time in a demonstration of the deep connection between the UK and India.

“This connection will only grow over the next decade as we do more together to tackle the world’s biggest problems and make life better for our people.

“The agreements we have made today mark the beginning of a new era in the UK-India relationship.”

Mr Johnson has already announced new trade with India, estimated to be worth £1bn, could create more than 6,500 jobs.

International Trade Secretary Liz Truss told Sky News on Tuesday that the agreements represented “the immediate gains we can get for both countries driving jobs and growth here in Britain and in India”.

She said negotiations on a full free trade deal with India would begin in the autumn, with an aim for the two countries to double their trade to £48bn per year by 2030.

Canadians ‘do not need to panic’ about food shortages amid COVID-19, experts say