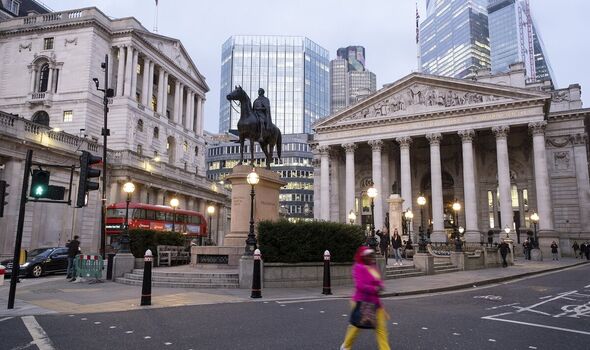 Chief economist Huw Pill said the country is probably in a recession and tough economic conditions ahead mean inflationary pressures could remain. He also warned that even falling gas prices may not be enough to end high levels of inflation as homes and businesses struggle to keep pace with living costs.

He went on: “It is therefore in this nexus that I focus in coming to my own assessment of the risks surrounding inflation persistence, which…will strongly influence my monetary policy position in the coming months.”

Mr Pill hinted an interest rate rise is on the way, saying the Monetary Policy Committee (MPC) – of which he is a member – will act “forcefully” if the outlook suggests more persistent inflation.

The base rate of interest is currently 3.5 percent, the highest since October 2008, with the MPC voting to increase the rate at each of its past nine meetings.

Experts have predicted rates could increase to 4.75 percent this year.

Jeremy Hunt announced help for businesses, schools and charities to cope with high energy bills will continue for another year. But the Chancellor significantly reduced the amount of support they will receive, with the total amount available just £5.5billion against the £18billion in just six months offered at the height of the energy crisis.

Mr Hunt said: “Wholesale energy prices are falling and have now gone back to levels just before Putin’s invasion of Ukraine.

“But to provide reassurance against the risk of prices rising again we are launching the new energy bills discount scheme, giving businesses the certainty they need to plan ahead. Even though prices are falling, I am concerned this is not being passed on to businesses.

“So I’ve written to Ofgem asking for an update on whether further action is needed to make sure the market is working for businesses.”

The plan was welcomed by the Confederation of British Industry, which said it would “provide respite for many firms”.

Tom Thackray, CBI director for decarbonisation policy, said: “It’s unrealistic to think the scheme could stay affordable in its current form, but some firms will undoubtedly still find the going hard.

“The Government has done much to protect businesses through the energy crisis.

“It must remain open, flexible and pragmatic in its approach to volatile wholesale energy markets as the year unfolds.”

The Government also announced that energy-intensive users, such as some factories that burn a lot of gas, will get extra support.

Gareth Stace, director general of UK Steel, said the extra support for his industry might still not be enough.

He said: “The Government is betting on a calm and stable 2023 energy market, in a climate of unstable global markets, with the scheme no longer protecting against extremely volatile prices.”

Covid 19 coronavirus: US population at slowest rise in 120 years