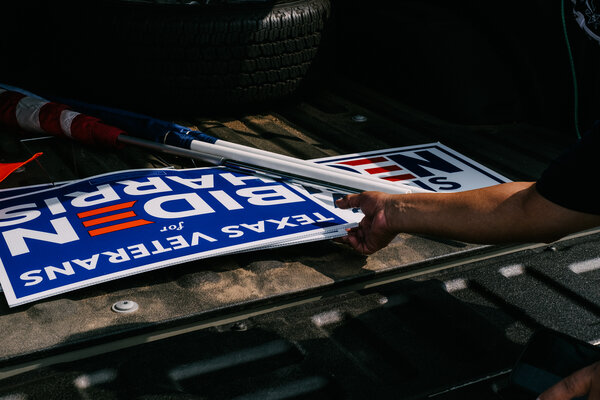 Joseph R. Biden Jr.’s campaign said on Sunday that it entered September with $466 million in the bank together with the Democratic Party, providing Mr. Biden a vast financial advantage of about $141 million over President Trump heading into the intense final stretch of the campaign.

The money edge is a complete reversal from this spring, when Mr. Biden emerged as the Democratic nominee and was $187 million behind Mr. Trump, who began raising money for his re-election shortly after he was inaugurated in 2017. But the combination of slower spending by Mr. Biden’s campaign in the spring, his record-setting fund-raising over the summer — especially after he named Senator Kamala Harris of California as his running mate — and heavy early spending by Mr. Trump has erased the president’s once-formidable financial lead.

Mr. Trump and his joint operations with the Republican National Committee entered September with $325 million, according to Mr. Trump’s communications director, Tim Murtaugh.

The Trump campaign pulled back on its television spending in August to conserve money, as some campaign insiders fretted about a cash crunch in the closing stretch of the campaign. But other officials argued that the Trump campaign would continue to raise heavily from small donors and that the cutbacks over the summer were shortsighted.

In the last four weeks of August, the Biden campaign spent $65.5 million on television advertising, compared with $18.7 million by the Trump campaign, according to data from Advertising Analytics.

Some Republicans have questioned how a Trump campaign that has raised $1.3 billion since the beginning of 2019 with the Republican National Committee has already spent nearly $1 billion of those funds before the start of voting. Trump officials have repeatedly pointed to their bigger investment in ground operations (such as door-to-door canvassing) that Democrats have forgone during the pandemic as prudent spending that will provide a benefit as balloting begins.

“Our early investment in states is going to move the needle in a way that Joe Biden’s campaign just can’t do, even if they tried starting now,” Bill Stepien, Mr. Trump’s campaign manager, told reporters this month.

An extraordinary influx of cash in August accounts for Mr. Biden’s newfound financial lead, after he and the Republicans entered the month nearly neck and neck. The Biden campaign and his joint operations with the Democratic National Committee raised a record $364.5 million last month — more than any previous candidate has raised in a single month — while Mr. Trump brought in $210 million, their campaigns said.

“It’s hard to even get your head around the size and historic nature of this,” Jennifer O’Malley Dillon, Mr. Biden’s campaign manager, said in a call with reporters this month. The cash-on-hand figure released by the campaign shows it spent about $192 million, barely over half of what it brought in last month.

“We’re going to have the resources, not just to go wide on our map but also to go deep within those states,” Ms. Dillon said of the Electoral College battlegrounds.

The Democrats received another financial boost recently when the billionaire Michael R. Bloomberg, who ran unsuccessfully in the Democratic presidential primary, announced he would spend $100 million supporting Mr. Biden and opposing Mr. Trump in Florida, by far the largest and most expensive electoral prize.

Monthly financial filings for both the Trump and Biden camps are due on Sunday to the Federal Election Commission, but those reports will offer only a partial window into the state of the money race, as some of their joint committees with the parties will not have to file until next month.

The death of Justice Ruth Bader Ginsburg instantly upended the nation’s politics in the middle of the presidential campaign and underscored the stakes of the contest.

Early voting for the presidential election starts in September in some states. Take a look at key dates where you live. If you’re voting by mail, it’s risky to procrastinate.

Keep Up With Our Coverage

Get an email recapping the day’s news

In Canada, a push to keep schools open in second coronavirus lockdown