WASHINGTON — President-elect Joseph R. Biden Jr. fielded congratulatory calls from European leaders on Tuesday, even as some of President Trump’s authoritarian allies maintained a conspicuous silence about the election that could foreshadow coming tensions with the Biden administration.

Mr. Biden spoke on Tuesday with President Emmanuel Macron of France, Chancellor Angela Merkel of Germany, Prime Minister Boris Johnson of Britain and Prime Minister Micheal Martin of Ireland. He offered the leaders messages of support and cooperation, his transition team said in a statement, including expressing to Mr. Macron “his interest in reinvigorating bilateral and trans-Atlantic ties, including through NATO” and the European Union — institutions Mr. Trump has repeatedly derided.

The conversations offered a clear reaffirmation of U.S.-European ties and a signal of a broader return to normalcy in foreign relations ahead. Coupled with the conspicuous silence of more authoritarian leaders, they also provided early hints of a reordering of American allies and antagonists back to their state before Mr. Trump’s disruptive foreign policy sank trans-Atlantic relations to their lowest point since World War II.

Among those who have remained silent are President Vladimir V. Putin of Russia, President Jair Bolsonaro of Brazil and President Xi Jinping of China. After days of quiet, Turkey’s president, Recep Tayyip Erdogan, finally congratulated Mr. Biden on Tuesday, according to Turkish state media, days after most other allies of the North Atlantic Treaty Organization had already done so. None of those authoritarian leaders — with the possible exception of Mr. Xi, whose calculations are unclear — welcome the prospect of a Biden presidency after years of mostly friendly relations with Mr. Trump.

Mr. Biden’s conversations with European leaders — whose contents were described by the Biden transition team in greater detail than is typical of the Trump White House — were also a stark contrast to the first days after the 2016 election, when Mr. Trump seemed to field visits and calls in haphazard fashion. Japan’s prime minister at the time, Shinzo Abe, quickly flew to Trump Tower in mid-November to become the first foreign leader to meet Mr. Trump, a first for a Japanese leader, while Mr. Trump took a call from the president of Taiwan in what was a startling breach of diplomatic protocol that infuriated Beijing.

“He’s doing it in the right order, unlike Trump when he took office,” said Evelyn N. Farkas, a former deputy assistant secretary of defense for Russia, Ukraine and Eurasia in the Obama administration. “Protocol is back.”

Jeremy Shapiro, a former Obama State Department official now with the European Council on Foreign Relations, said that under past circumstances, there would be nothing remarkable about a president-elect speaking to several European allies. But given four years of tensions with Mr. Trump, the calls hold unusual meaning.

Whether by intention or not, the European leaders also served to further legitimize Mr. Biden’s victory and discredit Mr. Trump’s continued false claim to be the winner.

“They’ve all come out and congratulated him, and in a sense weighed in on what is a domestic political struggle, which is a risky thing for them to do, after all,” Mr. Shapiro said. “Of course everybody thinks Joe Biden will be president. But they’re not 100 percent sure.” 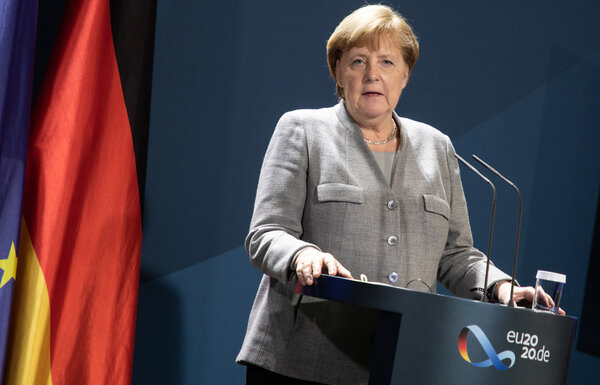 Ms. Merkel is clearly delighted by Mr. Biden’s victory, after four years of Mr. Trump’s complaints that Germany was taking advantage of the United States economically and militarily.

After Mr. Trump won the presidency in 2016, Ms. Merkel issued a statement pointedly reminding him that the United States and Germany were “connected by values of democracy, freedom and respect for the law and the dignity of man.” By contrast, she said she welcomed Mr. Biden’s victory “very warmly” with a statement that notably dismissed any doubt about the outcome, declaring: “The American people have made their decision.”

Mr. Johnson, while in some ways a populist fellow traveler of Mr. Trump’s, was also notably enthusiastic in a tweet posted after his Tuesday talk with the president-elect, saying he looked forward to working with the incoming president on climate change, democracy promotion and, echoing a Biden campaign slogan, “building back better” from the coronavirus pandemic.

According to the Biden transition team’s descriptions of the calls, Mr. Biden and the Europeans also discussed human rights, the conflicts in Ukraine and Syria, and Iran’s nuclear program — all areas in which they largely disagree with Mr. Trump’s policies.

The descriptions also said Mr. Biden and Mr. Johnson spoke about “strengthening democracy,” a core foreign policy theme of Mr. Biden’s campaign, in which he pledged to defend and restore democratic values around the world under assault from many of the same leaders who have been silent or slow to acknowledge his victory.

Those notably include Mr. Putin, whose spokesman said on Sunday that the Kremlin would “wait for an official announcement” before making any statement. China’s Foreign Ministry has used similar language.

Ms. Farkas said that any congratulations for Mr. Biden’s victory by Mr. Putin might be particularly painful for Mr. Trump, who has spent years courting the Russian leader’s favor and boasting about their relationship. “I do think that if Putin were to acknowledge reality, it would become more difficult for Trump to ignore reality,” she said.

Until Tuesday, another notable holdout had been Mr. Erdogan, who cultivated a bond with Mr. Trump that muted America’s response to several Turkish actions that angered other Atlantic alliance members, like Turkey’s invasion of northeastern Syria in October 2019 and its purchase of an advanced Russian-made missile system.

“Erdogan made all his bets on a Trump victory and is now devastated to see that Biden has won,” said Aykan Erdemir, a former member of Turkey’s Parliament now with the Foundation for Defense of Democracies, explaining the Turkish leader’s foot-dragging. “The Turkish president is distraught that he will no longer enjoy personal rapport with his U.S. counterpart, which has granted him impunity on myriad issues.”

Thomas Wright, the director of the Center on the United States and Europe at the Brookings Institution, saw a simple message emerging from the past several days.

“The free world is ready to move on,” he said. “The autocrats are mourning one of their own.”