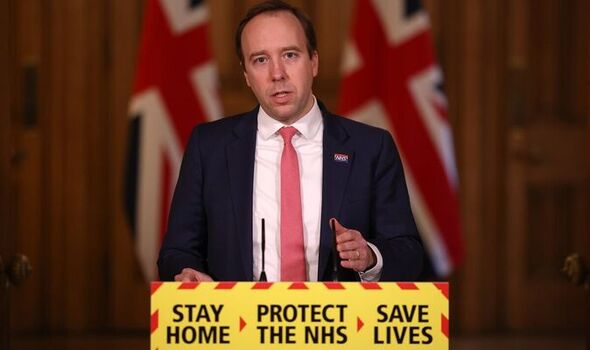 In his explosive Pandemic Diaries, the disgraced former health secretary claims it happened during the height of lockdown. But a Ministry of Justice source said on Thursday night the department did not “recognise” his version of events, as the plan was made public at the time and implemented.

Mr Hancock, recently stripped of the Tory whip for appearing on this year’s I’m a Celebrity…Get Me Out of Here!, said the MoJ believed prisoners infected with coronavirus would be “easier to manage” if they were not behind bars.

In Pandemic Diaries, he reveals Government feuds, failures and triumphs as it battled the pandemic.

Mr Hancock, 44, lost his Cabinet job last June after being filmed in a lockdown-busting clinch with his lover, Gina Coladangelo, 45.

But as health secretary under Boris Johnson, the father of three played a central role in huge decisions, including travel curbs and rolling out the world’s first Covid vaccine.

In the book’s prologue, Mr Hancock says he was “in the hot seat” during human history’s fastest-moving and most intense crisis.

He writes: “I am proud of what we achieved, especially on the vaccine. But there is much to learn for the next public health crisis of this kind, which I am sure will happen in my lifetime.”

Mr Hancock says he was pressured to sign off the prisoner release in March 2020, as the first lockdown loomed. His March 17 entry says: “A bonkers proposal from the Ministry of Justice to let prisoners out, as they’d be easier to manage if they’re not in prison.

“Yes, really: they actually thought this might be a goer. I was emphasising [my opposition] so hard that all of a sudden my chair could take the strain no longer and ripped, tipping me unceremoniously on to the floor.”

Writing on April 3, Mr Hancock says: “Officials are still insisting that Justice Secretary Rob Buckland wants to release thousands of non-violent prisoners to take the pressure off the system.

“I keep writing “NO” in large letters on submissions asking me to sign this off. It’s obvious the public won’t wear it, yet the idea keeps going back and forth on paper.

“After about the third iteration, I called Rob Buckland, who to my astonishment told me he’d been advised that I was the one who wanted to release them.

“We cannot lock up literally everyone in the country except prisoners, who we instead release, I spluttered.”

The MoJ source said: “This move wasn’t a secret – it was signed off and we don’t recognise this version of events.”

The appearance of Mr Hancock, 44, who came third in I’m A Celebrity, provoked outrage from Covid-bereaved families.

They accused him of “cashing in” on his time in charge of the pandemic response.

Mr Hancock was reportedly paid £400,000 for going on the ITV jungle show. He was also paid £45,000 to appear on a yet-to-be-shown Celebrity SAS: Who Dares Wins series on Channel Four.

Mr Hancock’s diaries cast new light on the internal power struggles as key players such as Mr Johnson, Rishi Sunak and Michael Gove argued over how far and how fast to go in shutting down the economy to protect lives.

Meanwhile, England’s chief medical officer, Professor Sir Chris Whitty, has said Britain will face a “prolonged period” of deaths due to the pandemic.

However, he says this will be caused by heart disease and cancer cases missed during lockdown.

Sir Chris’s comments came in a “technical report” on the pandemic by him and the Government’s chief scientific adviser, Sir Patrick Vallance.

Atlanta Loses Its Status As World's Busiest Airport After 20 Years — See the New No. 1

EU warning: Fishing compromise to break deadlock slapped down – ‘WE will decide!’