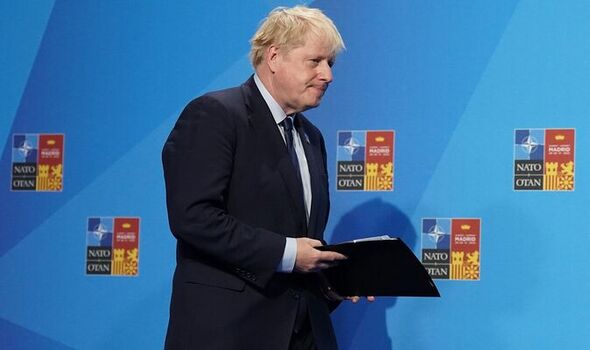 Official figures on Thursday showed that nearly two million people have been dragged into the higher income tax rates since the last general election in 2019. In response, the Prime Minister insisted he wanted to “reduce” the tax burden on households.

But he also sought to dampen expectations of a rush to slash levies in the immediate future.

His remarks follow reports that he has agreed with Chancellor Rishi Sunak that tax cuts cannot be delivered until the current inflation surge subsides.

Figures released by HM Revenue and Customs on Thursday showed that the Chancellor’s 2021 Spring Budget decision to freeze income tax thresholds had already led to a significant increase in numbers of earners paying both the 40% and new 45% higher Income Tax tax rates.

These figures include those paying at the ‘higher’ 40% rate or the ‘additional’ 45% rate.

Asked about the figures during a news conference at the Nato summit in Madrid, the Prime Minister pointed towards the Chancellor’s hike in National Insurance thresholds, due to come into force in July.

“We’ve got a tax cut worth £330 for all payers of National Insurance contributions coming in, a very substantial tax cut in addition to what we’ve done on fuel duty and council tax.

“Of course, we always want to try to reduce burdens but we always have to do it in a sensible and a responsible way,” he said.

Steve Webb, a former Lib Dem pensions minister who is now a partner at the financial consultancy firm LCP, forecast on Thursday that numbers of higher rate Income Tax payers will continue to soar due to the Chancellor’s four-year threshold freeze.

Estimates from consultancy LCP suggest that the total number of higher rate taxpayers could increase by more than three million over the whole of this Parliament.

LCP predicted the total could soar over seven million in 2024/25, including one in five of all taxpayers and marking a 70% increase in the number of higher rate taxpayers over the parliamentary term.

Mr Webb said: “Paying higher rate tax used to be reserved for the very wealthiest, but this has changed very dramatically in recent years.

“The starting point for higher rate tax has not kept pace with rising incomes, and the current five-year freeze on thresholds has turbo-charged this trend.

“People who would not think of themselves as being particularly rich can now easily face an income tax rate of 40% and around one in five of all taxpayers will soon be in the higher-rate bracket.”

Shevaun Haviland, director-general of the British Chambers of Commerce, urged the Government not to impose any more tax rises on businesses before the next election.

She told the organisation’s annual conference in London: “The role of government is to set the conditions that allows the UK to be the best place for our entrepreneurs to start and grow a business.

“If we want to give businesses the headroom to invest and grow, there must be no more business tax increases for the duration of this Parliament. Government should incentivise, not hinder, investment in growth.

“We want to see all Government departments working together to reflect the entrepreneurial spirit and creativity of business.

“We want them to build more innovative policies – such as the super-deduction tax incentive we saw last year. ”

Asked about the call for a moratorium on tax rises, a spokesman for the Prime Minister said: “Tax is a matter for the Chancellor. You’ve heard both him and the Chancellor talk about their ambition to lower taxes as we move through this Parliament.

“From July, we are reducing National Insurance payments by uplifting the bar which will mean people have more money in their pockets.”

Referring to the economic outlook in general, the spokesman said: “We obviously recognise it’s a worrying time for people. We know there are many people up and down the country struggling with the cost rises on many things such as energy and petrol.

“That is why the Chancellor set out a package of support not so long ago which will continue to support people throughout this year with those added pressures.”