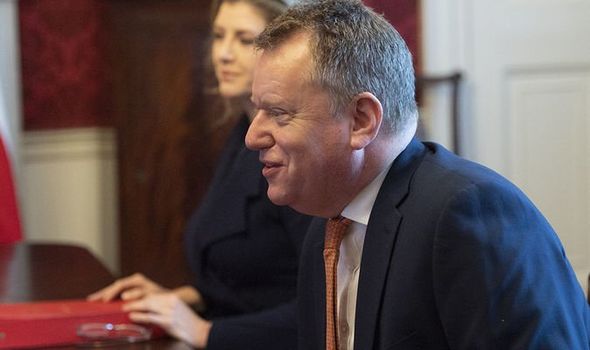 An insider declared the “sausage wars over” as he admitted Lord Frost and the EU’s Maroš Šefčovič had reached an agreement on once again delaying the introduction of customs checks.

It means fears of difficulties to ship pigs in blankets and other festive favourites to Northern Ireland around Christmas have likely been avoided.

Under the terms of the Protocol, agreed as part of the 2019 Brexit withdrawal agreement, chilled meats are banned from being shipped from Britain to Northern Ireland.

When the protocol came into force at the start of this year, a six month grace period was put in place on the introduction of the ban on chilled meats.

However, in June Britain demanded a delay to the implementation of the bureaucratic checks warning it would lead to supply shortages in Northern Ireland.

Lord Frost argued the UK’s internal market was being hampered by the Protocol and threatened to take unilateral action to suspend customs checks.

Brussels agreed to a request for a three-month delay to allow time for a more permanent solution to be found.

However, with less than four weeks until the end of the pause, no agreement has been reached.

The EU is understood to have once again suspended the introduction of the checks to provide more time for talks.

An official said the implementation of the red tape has been pushed back “quite far”.

An announcement on the new timeline is expected as soon as tomorrow.