The Prime Minister has welcomed Michel Barnier’s offer to compromise and is preparing for further talks this afternoon. The EU’s negotiator said will hold crunch talks with UK counterpart Lord Frost to help Downing Street decide whether the bloc has moved sufficiently to resume wrangling over a free-trade agreement. No 10 said: “We note with interest that the EU’s negotiator, speaking to the EP this morning, has commented in a significant way on the issues behind the current difficulties in our talks.

“We are studying carefully what was said.

“David Frost will discuss the situation when he speaks to Michel Barnier later today.”

Addressing the European Parliament in Brussels, Mr Barnier signalled the bloc was ready to make the necessary compromises in a bid to tempt Downing Street back to the negotiating table. 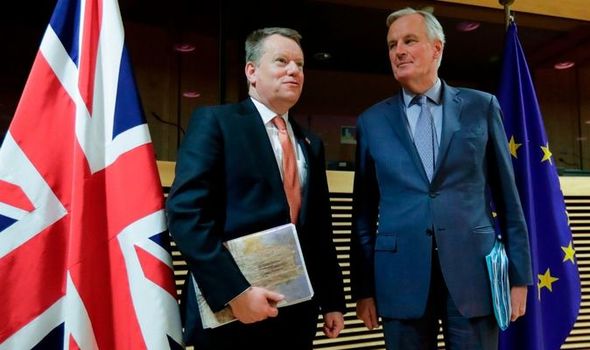 The Frenchman said: “We will seek the necessary compromises on both sides in order to do our utmost to reach an agreement

“We will do so right up to the last day that it’s possible to do so, our doors will always remain open right up until the very end.”

Mr Barnier had previously bee warned to make a “fundamental change of approach” if he wanted trade talks to resume.

He has since offered to compromise the EU’s position, intensify talks and begin work on legal texts to finally put pen to paper on the Brexit deal after months of stalling.

He could travel to London as early as tomorrow in order to salvage the negotiations, which Boris Johnson has currently paused in favour of no-deal Brexit preparations.