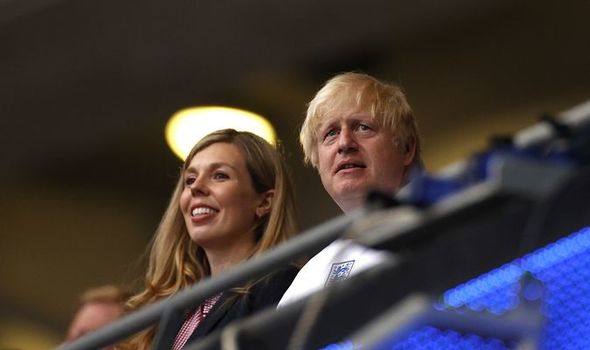 The Prime Minister’s wife will be the guest of honour at a Pride reception, organised by the LGBT+ Conservatives group as part of the conference calendar. Carrie will talk about the need for widespread support, known as “allyship”.

A statement from LGBT+ Conservatives said: “We’re delighted to announce that joining us as our guest of honour at our Annual Pride Reception, in partnership with Stonewall UK, is Carrie Johnson, long-standing ally and friend of the group. She will be speaking about the importance of allyship.”

Carrie, 33, a former Tory communications chief, is pregnant with her second child with the Prime Minister.

The couple married in Westminster Cathedral in May after the birth of their son Wilfred last April. Elena Bunbury, chairwoman of the LGBT+ Conservatives, said Carrie often attended the group’s events.

She added: “Carrie is a longstanding ally, and has always been a good sport to LGBT+ Conservatives.

“She even judged our virtual lip-sync last conference. We’re thrilled she’ll be joining us in person this year in Manchester.”

Carrie, who is director of communications at the Aspinall Foundation wildlife charity, has spoken out about environmental issues and highlighted animal cruelty in China.

She previously worked for sea-life campaign group Oceana. Her other jobs for the Tories include working on her now-husband’s successful campaign to be re-elected Mayor of London in 2012.

Dominic Raab: Show us princess Latifa ‘is alive and well’