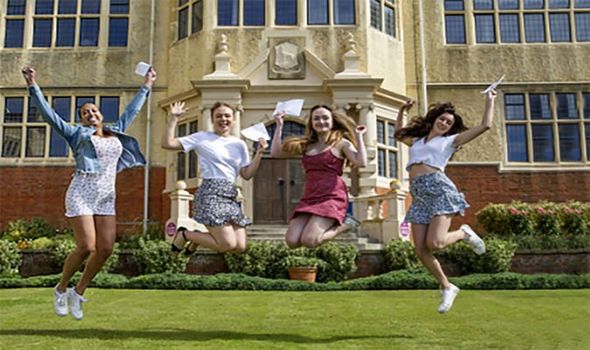 Gavin Williamson insisted the grading system was “rigorous” despite exams being scrapped for the second year in a row due to the pandemic.

Concerns about grade inflation intensified when yesterday’s results in England, Wales and Northern Ireland saw the proportion of A and A* grades awarded rocket to 44.8 percent from last year’s 38.5 percent.

But Mr Williamson insisted employers could have “real confidence” in the A-level grades awarded this year.

He also refused to rule out teacher assessments being used again next summer.

Mr Williamson said that youngsters “deserved” to be rewarded following the disruption to their education during the pandemic.

“We do have a rigorous system of grading and awarding. People have been awarded this grade on the basis of evidence.

“We took a difficult decision, and that decision was children were to be assessed on what they had been taught. We have seen various amounts of disruption around the country and children’s experiences have been different.

“But still, you have a very clear grading system. You still see children who are achieving A*s, As, Bs, Cs, have really achieved so very much. I think employers can have real confidence in the grades that they get. Let’s not forget this is an unprecedented year.”

Mr Williamson said he hopes schools will “move back” to exams next year.

But he confirmed that the Government was drawing up contingency plans “largely based around” teacher-assessed grades for next year.

“But we very much hope that we will be able to move into the more normal pattern of examinations from next year. But, always conscious that this pandemic has continuously changed, it’s absolutely right that we have contingencies there, as we always do.”

Asked if he was ruling out teacher assessments for this time next year, he said: “We are planning to move back to examinations as a form of assessment, but we always have to have a contingency plan in place.”

Yesterday’s figures meant that the proportion of pupils getting the top two A-level grades has risen by almost 75 percent since the last time conventional exams were taken before the pandemic struck.

Tory MP Robert Halfon, chairman of the Commons Education Committee, said: “I do worry about the fact that we seem to have, in essence, baked a hard rock cake of grade inflation into our exam results. The last year has been nothing short of a national disaster for our disadvantaged pupils.”

“I know it’s been a particularly difficult year for everybody doing A-levels because of the pandemic and the conditions in which you’ve been working.

“I hope you’ve done actually they charging the full well. If you haven’t got exactly the results that you were wanting, never mind, it happens to the best of us and there are plenty of options available.”

England were awarded an A grade or higher. Analysis found that 70.1 percent of pupils at fee-paying schools achieved the top grades, compared with 44 percent in 2019, when exams last took place.

Some 41.9 percent of students at academies achieved A or A* grades this year, while for comprehensives it was 39.3 percent.

Educational charity The Sutton Trust said the coronavirus crisis has “compounded existing inequalities, and today’s results are a reflection of that”.

Dr Tim Bradshaw, chief executive of the Russell Group universities body, said some courses “may not be able to accept students who narrowly missed their offer grades this time”.

Gavin Williamson said the Government expected all unis to go back to in-person lectures.

But several have vowed to continue with online lessons.

Mr Williamson said: “I think if universities are not delivering what students expect, then actually they shouldn’t be charging full fees.”

AS thousands of pupils nervously collect their results this week, my colleagues and I are preparing to welcome the next group of nurses, midwives, doctors, healthcare support workers and allied health professionals into the NHS.

I am proud to be a nurse and choosing to spend many wonderful years working in the NHS has been one of the best decisions I’ve ever made.

While I have always known how remarkable our health and care workforce is, the pandemic has shone an even brighter light on their extraordinary work.

It is clear from the huge numbers applying for healthcare degrees – including more than 70,000 for nursing courses alone – that our staff have inspired a generation.

This builds on a record high for NHS recruitment this year, with 16,000 doctors and nurses joining the health service.

With more than 1.3 million people now working for the health service in England, it is likely that someone you know – be it your daughter, grandson, niece, nephew or cousin – is working or will work here.

There remain countless opportunities to join us with more than 350 different roles available – from dieticians, physiotherapists and psychiatrists to surgeons, midwives and administrators.

While many young people will be heading to university, there are various routes into the NHS which don’t require a degree.

A healthcare support worker can be the perfect entry point, combining hands-on experience with training and giving you the option to work in a range of disciplines, from mental health to maternity, supporting patients and communities.

The role is crucial to the care we provide to patients – so much so we are investing an additional £15million towards the recruitment of 5,000 additional healthcare support workers.

So, if you are considering your own career path or supporting a child or grandchild with theirs, please consider joining the NHS.

You will be helping to secure a strong and bright future for the health service while making a massive difference to patients’ lives.