Political editor Beth Rigby explained what acclamation meant for the leadership candidates running to take over Boris Johnson’s position as Prime Minister since he was ousted from office last week. Then the political editor explained comments from Mr Johnson during PMQs in which the incumbent Prime Minister hinted at his successor being swiftly elected. Ms Rigby also noted that Mr Johnson had refused to tell her which candidate he was backing as he claimed he did not want to affect the race.

Sky News host Kay Burley said: “Leaving he will be, now Beth, what did he mean by acclamation?”

Ms Rigby said: “That was quite an… A moment at PMQs because what can happen is when you whittle down the candidates you get to the final two.

“If one person pulls out, or the Party overwhelmingly go to one, the effectively that is anointed acclamation.

“This is why what happened with Theresa May, you’ll remember when Andrea Leadsom dropped out of the race.

“And they never had to go around the country, now what was arresting about that, was number one, that is clearly not what Sir Graham Brady has said that he wants.

“A share of the 1922 Committee, publically said that he has sort to assurances from candidates that the members will have a say over the summer when the final two go toe to toe. 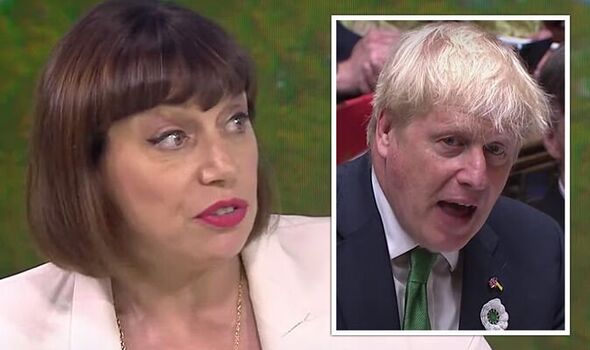 “So the Prime Minister saying that is, actually odd, that’s not as we understand what the process will be.

“And I wondered whether he was being a bit frisky as well, in that, there was Liz Truss sitting next to him.

“And he hasn’t publically said, that he’s backing anyone, in fact, he said when I asked him, did he feel betrayed and he said I’m not getting into how I feel.

“Or who I might be supporting because I don’t want to affect the race, but the symbolism of Liz Truss sitting there after all of the key allies in Cabinet… Or two of the at least publically backed her, does he want Liz Truss to be anointed?”