The insider claimed the European Parliament’s ratification process is already in danger after wrangling over the future relationship pact missed a number of vital deadlines. EU and UK negotiators are expected to make significant progress in the talks ahead of a crunch summit of the bloc’s leaders on Thursday. But Brussels is already making plans for talks to extend into December with no signs of a breakthrough on the horizon.

The diplomat said: “This will be tight and as the negotiations drag on we will maybe have to see that we find some creative solution but that is too early to discuss that at this stage.

European diplomats and officials expected any trade deal to be completed by October 31 to allow time for the ratification process. 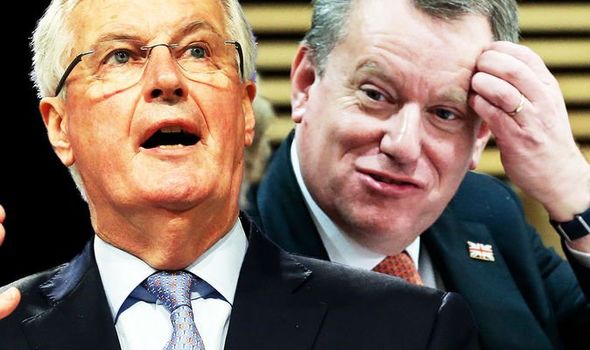 Senior members of the EU Parliament’s Brexit committee had wanted up to two months to scrutinise any agreement.

But they now face having to streamline the process with Michel Barnier and UK counterpart Lord Frost yet to break the deadlock in the rows over future fishing rights and common standards.

German MEPs David McAllister and Bernd Lange have already issues furious complaints to Mr Barnier over the delays in the trade talks.

Despite their rants, the European Council officials have claimed they are prepared to allow the process run until December 10 at the latest.

Eurocrats insist any agreement must be fully completed and translated into the bloc’s 24 official languages by the cut-off point.

This would leave MEPs with just five days to scrutinise the legal text before a planned vote on December 16.

Preparations are being made for an emergency EU Parliament session between Christmas and New Year, when the institution is in recess, to rubber-stamp the Brexit trade deal before the end of the transition period.