Foreign Secretary Dominic Raab has said he is concerned about the situation in Iran and the wider region after the assassination of one of the country’s top nuclear scientists.

Mohsen Fakhrizadeh died in hospital after gunmen fired at his car near Tehran, in an ambush Iran‘s president has blamed on Israel.

Mr Raab told Sky’s Sophy Ridge on Sunday programme: “We are concerned about the situation in Iran and the wider region. We do want to see de-escalation of tensions.

“We’re still waiting to see the full facts of what’s happened in Iran, but I would say that we stick to the rule of international humanitarian law, which is very clear against targeting civilians.” 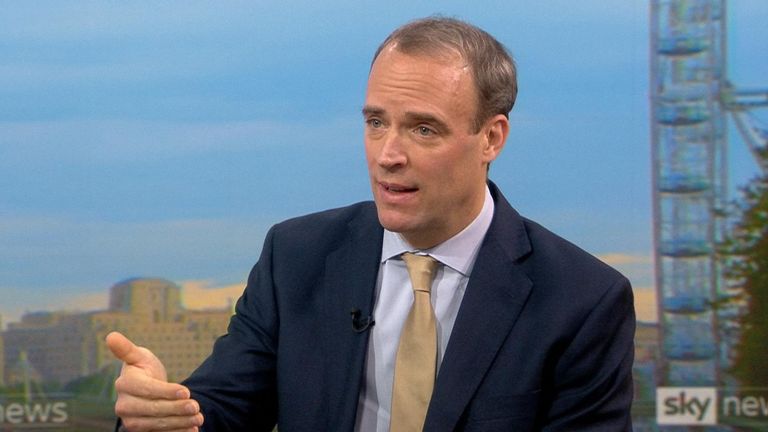 Iran’s supreme leader Ayatollah Ali Khamenei has called for the “definitive punishment” of those behind the assassination and Israeli embassies around the world have been put on high alert.

Israel has long alleged that Mr Fakhrizadeh had led a military nuclear programme in the early 2000s, but the country declined to comment following the killing on Friday.

In Iran, an opinion piece published by the hardline Kayhan newspaper has suggested Iran should attack the Israeli port city of Haifa if Israel carried out the killing.

The newspaper has long argued for aggressive retaliation against Israel, but this time it called for an assault that would destroy facilities and cause “heavy human casualties”.

When Mr Raab was asked if he believed Israel might have a case to answer, he said: “I have no idea. I don’t have any of the facts that would enable me to answer that question at this point.”

He also said that there are hopes the nuclear deal made between world powers and Iran in 2015 can be looked at again under the incoming Joe Biden administration in the US.

The deal was effectively put on ice when Donald Trump withdrew the US from it in 2018.

When asked if the death of Mr Fakhrizadeh had made Iran “a safer place”, Mr Raab said: “I think that’s very difficult to say because there will be other scientists.

“But right up to Christmas, I will be meeting with my colleagues, also with Iran if they are willing to come into the tent, to make sure we hold them to account but also to try and find a peaceful path through.”

“Our people are wiser than to fall in the trap of the Zionist regime (Israel)… Iran will surely respond to the martyrdom of our scientist at the proper time,” he added.

Meghan Markle makes her first appearance since opening up about miscarriage

Singaporean cooks up Eid feast for migrant workers in lockdown