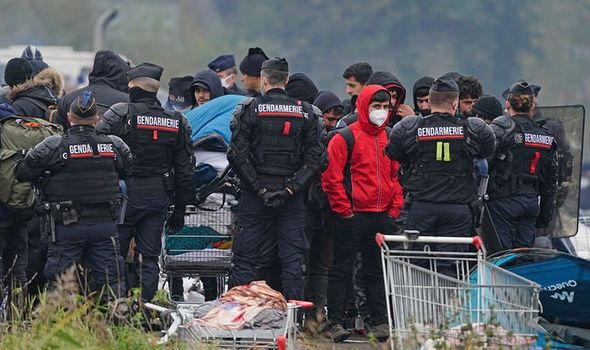 It is understood they could include ways to open legal routes to the UK for asylum seekers and to allow unaccompanied minors to join relatives in Britain.

And a Government source said it appeared to be a “positive” move by the French after the diplomatic row which erupted following the boat tragedy which claimed 27 lives last week.

Tory MP Michael Fabricant said it was “good news” France had “backed down”.

The development came as French police began smashing up the illegal camp where the UK-bound migrants stayed before drowning.

French Interior Minister Gerald Darmanin said all those in the camp would be given the chance to claim asylum in France, discour- aging them from trying to reach the UK. Despite the apparent progress Downing Street has slapped down a claim from French Europe Minister Clement Beaune that the UK had an economic model of “quasi-modern slavery” involving illegal work.

The Prime Minister’s spokesman said: “We don’t agree. We have acknowledged we need to fix our broken asylum system so we can stop this parallel illegal route being exploited and break these criminal gangs exploiting vulnerable people.

“That’s why we are driving through the changes in our Nationality and Borders Bill.”

The spokesman added: “We have a strict regime and all those seeking to work in the UK must show documentary evidence of their right to do so before an employer can hire them.”

Five of the best US destinations to visit in 2021