The attorney general’s decisions in a handful of cases have shaped an early challenge for him: fortifying the department’s independence. 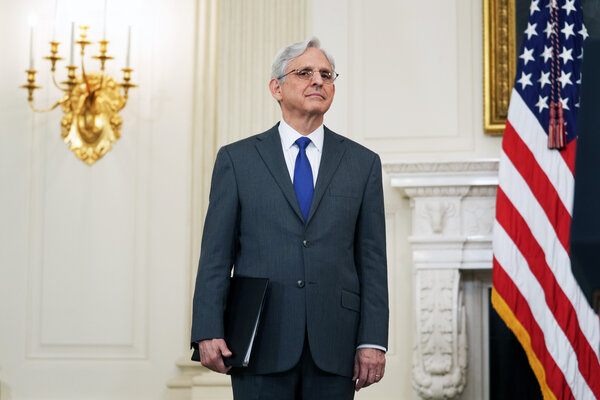 WASHINGTON — When Attorney General Merrick B. Garland had to decide whether the Justice Department should continue its highly unusual defense of former President Donald J. Trump in a defamation lawsuit, he relied on the studious approach that had served him as a federal judge for more than two decades.

The case was politically perilous and discomfiting. Mr. Trump had declared that a woman who accused him of rape, the writer E. Jean Carroll, was lying to generate publicity. Mr. Garland later told reporters that if the Carroll matter were a policy question, it was one he would “abhor.” But as attorney general, he had to set aside his personal views to weigh the law.

Mr. Garland set to work. He reviewed the argument built by the department’s lawyers, even reading the relevant cases himself rather than relying only on aides to brief him, according to multiple people briefed on the case. Mr. Garland ultimately decided last month not to overturn the Trump-era decision — that because Mr. Trump made the comments in the capacity of his office, a Justice Department defense was proper — based largely on multiple precedents.

The backlash was swift. Democrats decried the result, and the White House quickly distanced itself from the decision. But Mr. Garland saw it as the kind of impartial call that ensures that the same rules apply both to Democrats and to Republicans. And like many other former prosecutors, he viewed it as best to let the legal filing speak for itself.

In his first months as attorney general, an early challenge is coming into focus for Mr. Garland: to convince the public that a post-Trump Justice Department is not the same as an anti-Trump one.

Mr. Garland, slight, owlish, soft-spoken and deliberative, has had to quickly learn that the scholarly approach that served him as a judge cannot on its own restore independence and credibility to an agency battered by Mr. Trump’s attempts to improperly wield its power. He has struggled to convey his message, according to former law enforcement officials, watching as his agenda was repeatedly subsumed by headlines about politically fraught matters left over from the Trump administration.

“The question for Garland is whether righting the ship of the department is mutually exclusive from moving on from Trump,” said Barbara Perry, a presidential historian at the University of Virginia’s Miller Center.

The decision in the Carroll case was among a spate of Justice Department moves in Mr. Garland’s first months in office that critics — many on the left — denounced as unnecessarily shielding Mr. Trump and his top officials. The department also moved to keep secret a memo that former Attorney General William P. Barr relied on to clear Mr. Trump in the Russia investigation, and Mr. Garland was reticent when Democrats on the House Intelligence Committee asked for more information about why prosecutors seized their account information from Apple, citing longstanding norms that the department does not discuss investigations.

Mr. Garland has also reckoned with prosecutors’ fight to obtain reporters’ phone and email records, including imposing gag orders on media companies. Begun during the Trump administration, that effort spilled over into Mr. Garland’s tenure, and he took responsibility in recent discussions with news executives, according to two people briefed on the conversations.

Together, the moves ended any honeymoon period for Mr. Garland, whom Mr. Biden had hailed as a nominee who could restore the Justice Department’s integrity and independence after it was called into question under Mr. Trump.

Gucci Linking With Detroit Vs. Everybody

Woman makes jewellery from the teeth of dead loved ones