Dominic Raab is currently at the helm of the British Government, filing in for Boris Johnson as the Prime Minister rests in hospital. As the virus continues to pulse through Whitehall, the Government has revealed who the “designated survivor” is should Mr Raab also fall sick.

Who is in charge if Dominic Raab falls sick?

As First Secretary of State, Dominic Raab has pledged to continue to implement the Prime Minister’s plans while he is in hospital.

Boris Johnson has asked the Foreign Secretary to stand in “wherever possible” while he is away from Number 10.

Earlier today Downing Street revealed the order of “designated survivor”, instituted to create a governmental line of succession due to COVID-19. 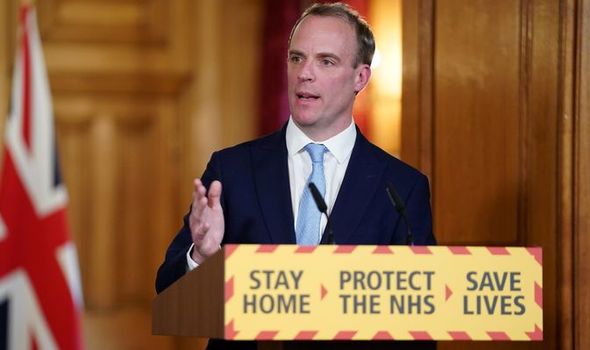 While Mr Raab will serve as a placeholder until he returns, there is a chance he could also fall sick, in which case his position would fall to fresh-faced Chancellor Rishi Sunak, a No 10 spokesman revealed.

The Prime Minister was admitted to intensive care yesterday with symptoms of coronavirus, more than a week after he first contracted symptoms.

The spokesman confirmed the news as they revealed Mr Johnson was “in good spirits” following his first night in intensive care.

They added he is not on a ventilator as others with COVID-19 have required.

The spokesman said: “The Prime Minister has been stable overnight and remains in good spirits.

“He is receiving standard oxygen treatment and breathing without any other assistance.

“He has not required mechanical ventilation or non-invasive respiratory support.”

The spokesperson declined to reveal whether he could sit up or talk to anyone but added he has not directly spoken to Mr Raab.