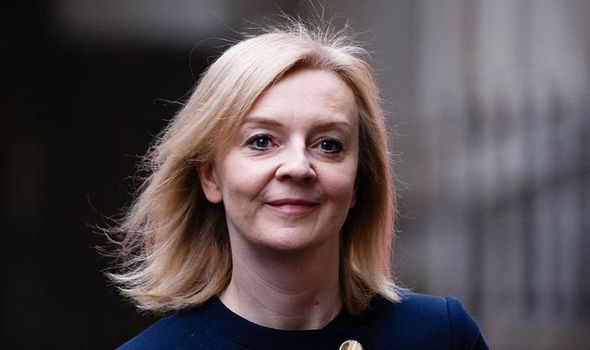 The Foreign Secretary will lead talks with the EU over the Northern Ireland Protocol that has led to tensions in the region by hitting trade across the Irish Sea. Ms Truss said she was “pleased” to be taking on the responsibility for the negotiations and Britain’s “wider relationship” with the bloc.

It is understood Boris Johnson had asked Lord Frost to delay his departure to next month to avoid further destabilising his premiership. But the decision leaked out so he quit on Saturday night.

The peer heaped pressure on the Prime Minister at the end of a tumultuous week by attacking some Government policy decisions.

Senior Tory MP Simon Hoare said: “The graveyard is full of people who think that they are irreplaceable. None of us are.

“We can resign, we can step aside, we can disappear off the stage. Somebody comes in to fill our shoes.

“So, a blow, but not a hammer blow and certainly not a body blow.”

Citing the “direction of travel” of the Government, as well as fears over “coercive” Covid measures and the wish for the UK to become a “lightly regulated, low-tax” economy, Lord Frost’s departure was described as a watershed moment in an extremely damaging week for the PM.

No 10 said Ms Truss would take over ministerial responsibility for the UK-EU relationship, and would lead negotiations to resolve problems with the NI Protocol.

Ms Truss transformed from being pro-Remain to a Brexiteer following the referendum in 2016. She consistently polls as the most popular Cabinet minister with party members and has been tipped as a future leadership contender.

Wendy Morton MP will move from being Europe and Americas minister to replace Mr Heaton-Harris at the DfT.

It marked the end of a dismal week for Mr Johnson after he suffered an unprecedented rebellion over Covid curbs followed by a major defeat in the North Shropshire by-election.

Lord Frost said he was unhappy Covid restrictions had not proved “irreversible” as promised. He also expressed frustration at the Government’s plan to increase national insurance to pay for social care, saying he wanted the UK to become a “lightly regulated, low-tax” country.

Health Secretary Sajid Javid said Lord Frost was a “man of principle” but insisted Mr Johnson is the right leader for the country.

He said: “We’ve had one very disappointing election result and from that you cannot take away the ability of Boris Johnson to win election after election.”

Tory MP Peter Bone said he agreed with Lord Frost’s concerns about the direction of the Government.

He said: “Boris has led this country exceptionally well. But what comes next? And that’s what I think Lord Frost is talking about.

“I think part of that rebellion of 100 Conservative MPs was due to the fact we want to see the Prime Minister move to a more conservative agenda.”

Mr Bone said he was frustrated by the prospect of “coercive measures” to control coronavirus.

He said: “I’ve cancelled all in-person meetings and the get-together with staff. I won’t be going to crowded places, but leave that up to the individual to make that decision, don’t have the state telling me what I have to do every day, and so in that regard, yes I’m with Lord Frost.”

The peer was negotiating with the EU over ending customs problems caused by the Northern Ireland Protocol, which was struck to avoid a hard Irish border. DUP leader Sir Jeffrey Donaldson said he was “very concerned” about the resignation of Lord Frost at “this crucial time”.

Grow a spine! Britons fume at Boris over Article 16 game of chicken with EU