A shocking new poll shows that Liz Truss is less popular than Jeremy Corbyn, as the Prime Minister is scrambling to regain control of her party. The poll, conducted by YouGov between 1 and 2 October 2022, shows that just 14 percent of the public now say they have a favourable impression of Liz Truss. 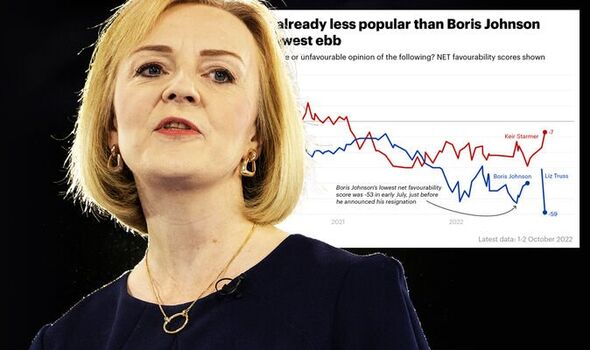 The Prime Minister’s net favourability has fallen to -59, having dropped by 28 points in less than a fortnight.

At its lowest point, Jeremy Corbyn’s net favourability was -55 in June 2019.

Meanwhile, Boris Johnson’s lowest ever favourability score was -53 in July 2022.

Ms Truss admitted last month she was willing to be unpopular in her policies if it gets Britain booming again.

The Prime Minister believes her plan will be rewarded once the economy starts seeing strong levels of growth.

But nearly three quarters (73 percent) of the 1,751 UK adults polled now see Ms Truss in an unfavourable light, including more than half (55 percent) who see her very unfavourably.

The Prime Minister has a lower approval rating than the Conservative party as a whole, which has a net favourability score of -50, down from -33 in September’s poll.

The party is viewed favourably by just 20 percent of the public, down from 28 percent in September.

She went blind at 37. Others with diabetes are now at risk of losing their sight