With its expanded subsidies for health plans under the Affordable Care Act, the coronavirus relief bill makes insurance more affordable, and puts health care on the ballot in 2022. 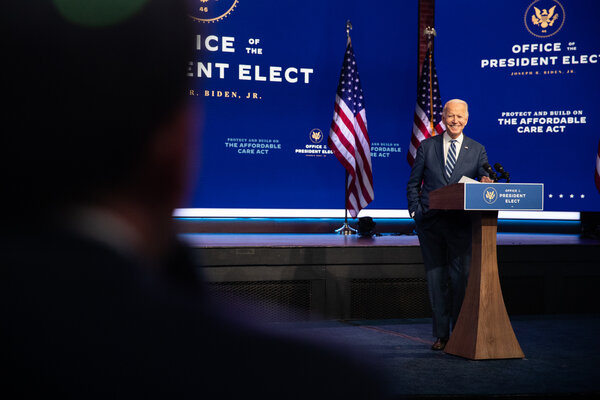 WASHINGTON — President Biden’s $1.9 trillion coronavirus relief bill will fulfill one of his central campaign promises, to fill the holes in the Affordable Care Act and make health insurance affordable for more than a million middle-class Americans who could not afford insurance under the original law.

The bill, which will most likely go to the House for a final vote on Wednesday, includes a significant, albeit temporary, expansion of subsidies for health insurance purchased under the act. Under the changes, the signature domestic achievement of the Obama administration will reach middle-income families who have been discouraged from buying health plans on the federal marketplace because they come with high premiums and little or no help from the government.

The changes will last only for two years. But for some, they will be considerable: The Congressional Budget Office estimated that a 64-year-old earning $58,000 would see monthly payments decline from $1,075 under current law to $412 because the federal government would take up much of the cost. The rescue plan also includes rich new incentives to entice the few holdout states — including Texas, Georgia and Florida — to finally expand Medicaid to those with too much money to qualify for the federal health program for the poor, but too little to afford private coverage.

“For people that are eligible but not buying insurance it’s a financial issue, and so upping the subsidies is going to make the price point come down,” said Ezekiel Emanuel, a health policy expert and professor at the University of Pennsylvania who advised Mr. Biden during his transition. The bill, he said, would “make a big dent in the number of the uninsured.”

But because those provisions last only two years, the relief bill almost guarantees that health care will be front and center in the 2022 midterm elections, when Republicans will attack the measure as a wasteful expansion of a health law they have long hated. Meantime, some liberal Democrats may complain that the changes only prove that a patchwork approach to health care coverage will never work.

“Obviously it’s an improvement, but I think that it is inadequate given the health care crisis that we’re in,” said Representative Ro Khanna, a progressive Democrat from California who favors the single-payer, government-run system called Medicare for All that has been embraced by Senator Bernie Sanders, independent of Vermont, and the Democratic left.

Lola Cars brand and technical assets put up for sale