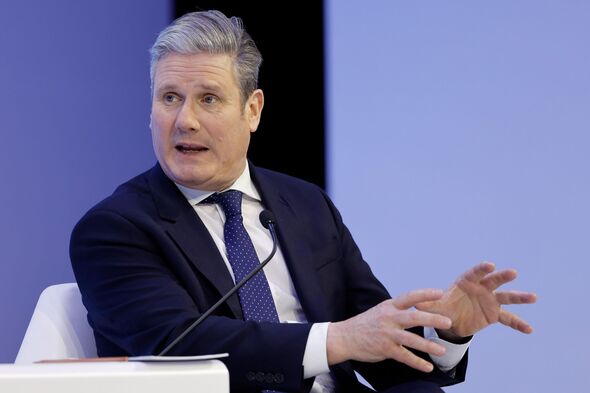 Sir Keir Starmer has said there is “no case” for Britain re-joining the EU single market – a stark contrast to remarks made by London’s Labour mayor Sadiq Khan. The party leader has been attending the World Economic Forum in Davos, Switzerland, this week alongside shadow chancellor Rachel Reeves.

Speaking to Newsnight on the BBC, Mr Starmer said: “We would accept that the deal [Boris] Johnson got is not a good deal, and you can see the impact it is having on our economy.”

“And that is why we have been clear we want a closer relationship with the EU. That starts with the protocol in Northern Ireland.

“It then goes into a discussion about how close we can be.”

Mr Starmer went on to say “we can’t go back into the EU” and that there wasn’t “a political case” for re-joining the EU or the single market.

However, just days ago, Mr Khan had called for what he described as a “pragmatic debate” about the benefits of being a part of the customs union and the single market.

The London mayor said “Brexit isn’t working” during talks with business leaders at Mansion House, adding that “a shift from this extreme, hard Brexit” would help to increase Britain’s economic future, The Telegraph reported.

Mr Khan also said that the adverse economic effects of leaving the EU were occurring “at a time when we can least afford it”.

However, the mayor acknowledged there was little public appetite for “a return to the division and deadlock” that had consumed much of UK politics since the leave vote in the 2016 referendum.

Labour has made a significant shift in its rhetoric on Brexit lately, having previously been viewed by many commentators as wanting to stay away from the issue.

Earlier in the month, Sir Keir Starmer outlined a planned “Take Back Control” bill that Labour would introduce upon taking power.

The bill would see more powers transferred from Westminster to local authorities and echoed the slogan used by the Leave campaign during the 2016 referendum.

During a recent visit to Belfast, the Labour leader also called on the Government to set aside ideological issues to preserve the peace process and offered to work across the aisle to resolve problems with the Northern Ireland protocol.

“Whatever political cover you need, whatever mechanisms in Westminster you require, if it delivers for our national interest and the people of Northern Ireland, we will support you,” said Mr Starmer.

“The time for action on the protocol is now. The time to stand up to the ERG [European Research Group] is now.”

The Labour leader went on to call on the government to put the people of Northern Ireland above what he described as a “Brexit purity cult which can never be satisfied”.

Recent polls have shown public support for the UK’s decision to leave the EU has begun to drop.

In addition, the YouGov tracker poll on how the public thinks the Government is handling Brexit recently saw 66 percent answer “badly”, with just 21 percent answering “well” and a further 13 percent saying they weren’t sure about the issue.

Page 3 girl is cleared of running over husband