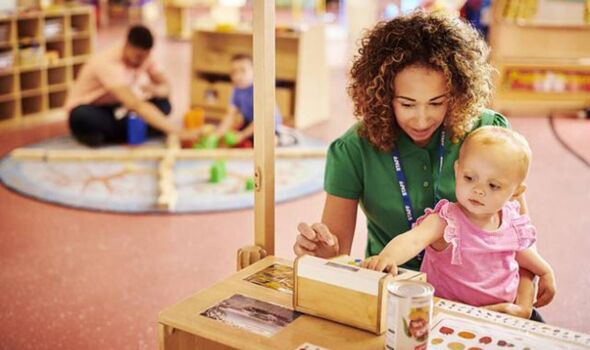 Former Prime Minister Liz Truss had been looking at increasing free childcare support by 20 hours a week and ending mandated staff-child ratios to slash costs for providers. But Mr Sunak has shelved the plans and is drawing up his own proposals.

Tory MPs yesterday warned the issue must not be kicked into the long grass as childcare is “hugely and unnecessarily expensive” and there is a “major structural problem” which needs urgently addressing.

They say cheaper access to childcare would allow more mothers to return to work sooner and increase productivity within the economy.

The expansion of the free childcare offer would have cost billions of pounds at a time when Treasury chiefs are trying to limit Government spending.

As it stands, all three and four-year-olds in England are entitled to 15 hours’ free childcare a week during term time, while some families can claim up to 30 hours. Ms Truss considered extending this to 50 hours.

And among the other plans considered during the former Prime Minister’s tenure was to completely abolish staff-to-child ratios in a bid to bring down costs for providers, in the hope it would also make childcare cheaper for parents.

Changing the early years staff per child ratio from 1:4 to 1:5 for two-year-olds is being formally considered by government after a public consultation launched in July.

Former Chief Secretary to the Treasury Simon Clarke declared yesterday: “Childcare is hugely and unnecessarily expensive in England and we should do all we can to support working mums.”

Tory MP Siobhan Baillee said: “This is something Number 10, ministers, need to knock on the head.

“Liz Truss rightly wanted to be bold on childcare and while I’m personally not convinced that changing ratios and just expanding existing schemes is the right approach – the message should clearly be that decent reform is still coming.”

Liz Truss had been looking at increasing free childcare support by 20 hours a week and ending mandated staff-child ratios in what her team dubbed a “big bang” shake-up of the system.

Steve Brine, the Tory MP and chairman of the all parliamentary party group on childcare and early education urged ministers to prioritise reforms in the months ahead.

Mr Brine said: “There is a major structural problem with childcare in England across facilities both run by the state and, especially, those run by private individuals and firms.

“There should be a review of long-term childcare funding. The pressure on costs for childcare providers is forcing many of them out of business.

“Our message to ministers is talk to us and talk to the sector.

“It is not too late to pursue reforms but the situation is serious.”

Ministers and officials working on Ms Truss’s childcare overhaul described them as “big bang” reforms and said she had made driving through childcare changes one of her priorities in office.

Neil Leitch, of the Early Years Alliance called on the Government to urgently focus on childcare reforms.

Mr Leitch said: “Education starts when a child comes into this world, not when they walk through the school gates.

“Rishi Sunak should invest more in the early years and the country would reap the benefits. It plays into the government’s levelling-up agenda and its strategy for growth.”

He also called for a cabinet minister position for the early years.

A Department of Education spokesman said: “We continue to review all options to improve the cost, choice and availability of high-quality childcare for working parents.”

Former Cabinet minister Andrea Leadsom said she strongly believes childcare is an issue the government must urgently tackle, in order to prevent it from being “very prescriptive” and too expensive.

“In my view, the answer to it is to give every new parent a budget for their childcare entitlement from birth until their child goes to school, then you can either adjust that budget upwards or downwards depending on affordability,” she said.

Mrs Leadsom said improving support for parents is crucial and is a “major, major battleground issue for the next election”.

“I want every Conservative to have on their pledge cards ‘we have delivered the best start for life programme’,” she told PoliticsHome.

Bernie Ecclestone Says F1 Season Has Too Many Races

House Democrats pushed through an aid package with little chance of becoming law.