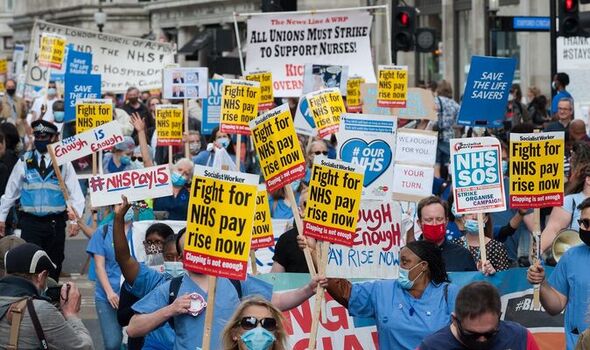 Police officers were also handed a £1,900 boost in what the Government says are the highest public sector pay rises in 20 years. But unions say the increases are a “kick in the teeth” as they are a real-terms pay cut due to high inflation, and warn of a wave of industrial action in the autumn.

Following a public sector pay review, more than a million nurses, paramedics, midwives, porters and cleaners will get a rise of at least £1,400, with the lowest earners receiving up to 9.3 percent backdated to April, the Department for Health said.

Dentists and doctors will get 4.5 percent while the average basic pay for nurses will go up from £35,600 to £37,000. Newly qualified nurses will get 5.5 percent taking their pay to £27,055. On Monday Health Secretary Steve Barclay said of the rise: “Very high inflation-driven settlements would have a worse impact on pay packets in the long run than proportionate and balanced increases now, and it is welcome the pay review bodies agree with this approach.”

But Danny Mortimer, chief executive of NHS Employers, said while they were pleased the pay rise for NHS staff was above the original three percent, it still places NHS and public health leaders in the “impossible position of having to choose which services they will cut back on in order to fund the additional rise”.

Meanwhile, the starting salaries for teachers outside London will rise by 8.9 percent to £28,000.

Teachers who have been in the profession for more than five years will get a five percent increase from September.

Education Secretary James Cleverly said: “We are delivering significant pay increases for all teachers despite the economic challenges, giving teachers the ­biggest pay rise in a generation.”

The £1,900 across-the-board pay hike for police officers amounts to an average five percent. Those on the lowest pay are ­getting a rise of up to 8.8 percent. The highest paid will receive between 0.6 percent and 1.8 percent and the minimum starting salary for a police constable degree apprentice will increase to £23,556.

Home Secretary Priti Patel said: “It is right that we recognise the extraordinary work of our officers who day in, day out, work tirelessly to keep our streets, communities and country safe.”

All the rises were recommended by independent public sector pay review bodies, who take evidence and talk to those in the industry.

Their recommendations were all accepted in full by the different government departments, who said the increases recognise the contribution of key workers while balancing the need to protect taxpayers, manage public spending and not drive up inflation.

But union bosses were furious at what they call “a massive national pay cut”.

Unite general secretary Sharon Graham said: “The Government promised rewards for the dedication of the public sector workforce during the pandemic.

“What they have delivered instead, in real terms, is a kick in the teeth.

“We expected the inevitable betrayal but the scale of it is an affront.”

Both the NASUWT and NEU teaching unions said the proposed increase of five percent for more experienced staff is too low. The NEU has said it will now consult its members ­
on whether to take strike action in the autumn.

Kevin Courtney, the joint general secretary, said the five percent increase would mean “yet another huge cut” to the real value of pay against inflation.

And Geoff Barton, general secretary of the Association of School and College Leaders, said the proposed increase is a “real-terms pay cut which will worsen teacher shortages”, with no additional money for schools to fund the rise.

“It is a double whammy that lets down the teaching profession and the pupils in our schools,” he said.

Yamaha will not launch any big bikes in India this year

POLL: Do you think Boris Johnson will win no-confidence vote tonight? Do YOU want new PM?